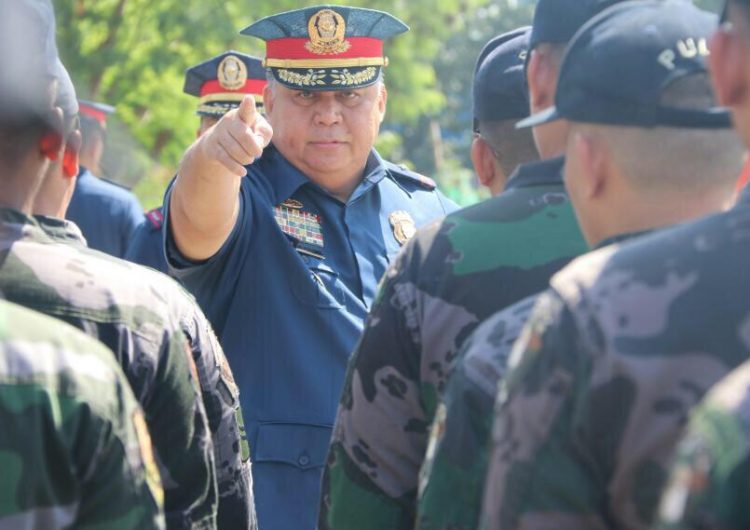 Another day in the pandemic, another drama for Major General Debold Sinas of “mañanita” fame. This time around, Sinas is under fire online due to an alleged harassment of a retired police officer’s family—and on the first day of the Anti-Terror Law’s enactment, no less.

Here’s a recap of last weekend’s events: On Saturday, July 18, Sinas and several armed police officers made their way to a former compound of the Philippine National Police in Taguig City. As it stands, it is currently the home of retired Police Executive Master Sgt. Arnel Delos Santos. However, both he and his wife were out of town.

The visiting officers were however met by some of the family members, including 20-year-old Arles Delos Santos, who shared his side of the story on Facebook. According to Arles, the “harassment” was a recurring case since ECQ, as the officers attempted to yet again evict the family out of the compound.

Internet folks pointed out the kind of treatment the family received. Arles and his older brother Mike approached the officers, with the latter handing a folder with copies of their certificate of occupancy and other residential documents. However, the police chief said that the Delos Santos’ photocopies were “questionable and incapable of being established.”

And according to Arles, Sinas wasn’t able to show any documents himself.

The younger Delos Santos then started to record the officers on video, but one of them confiscated the phone. Back in January, Interior Secretary Eduardo Año had said that police officers shouldn’t snatch phones away.

Other moments called to attention include Arles asking the officers to return their photocopied documents. Rappler reported that he walked over to one officer, who then threatened to punch him.

In defense, Sinas said that the compound was owned by the Southern Police District and was set to be a quarantine facility for officers who might have contracted COVID-19. The Delos Santoses may have overstayed their welcome as Sinas said they were only allowed to use the lot temporarily for “humanitarian consideration.”

It should be noted that this all happened on the first day of the Anti-Terror Law’s enactment. While some government officials and lawmakers assured the public that safeguards are in place, the worry still hovers over most citizens. We previously asked our burning ATL questions to a lawyer, and one primary concern boiled down to law enforcers who may resort to force.

“But these safeguards are nothing where the prevalent mentality among law enforcers, it seems, is ‘violate first, justify later,’’ said Atty. Romel Bagares of the Lyceum Philippines University College of Law.

According to Philippine National Police chief Gen. Archie Gamboa, the PNP will conduct an investigation on the officers involved, including the “cellphone-taking” incident.

Read more:
What you need to know about Gen. Sinas and PNP’s alleged “harassment” of a retired cop’s family
Police caught forcibly tampering with reporter’s phone during Translacion
We asked a lawyer all your questions about the Anti-Terrorism Act

We may or may not share the same style with her, but one...

SHAREIf you’re having a little trouble getting into the NBA Playoffs mood (maybe...