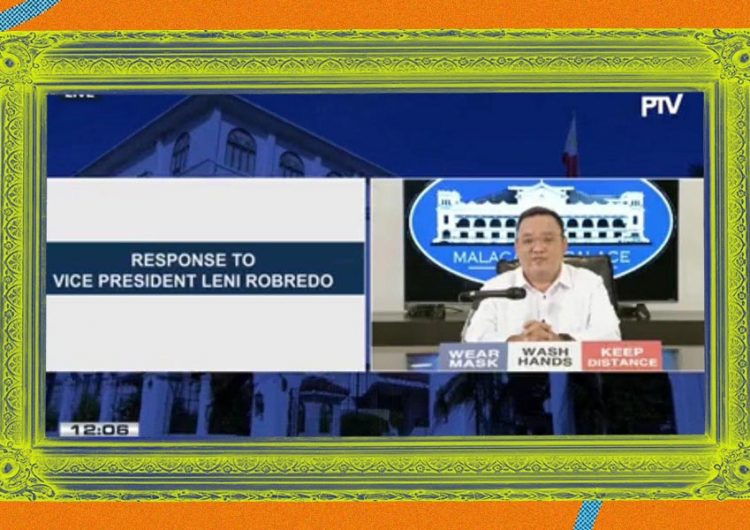 The Harry Roque saga continues—now, with a PowerPoint presentation as a new participating character.

In today’s press briefing, presidential spokesperson Harry Roque prepared a deck not only to update the nation on the government’s current COVID-19 response but also to respond to Vice President Leni Robredo’s recommendations. The title says it all: “Response to Vice President Leni Robredo,” which laid out Robredo’s recommendations such as consistent public information, budget utilization, transportation concerns, restarting the economy, education and the composition of the IATF.

In response, Roque invited Robredo to get in touch with him if she has any questions. “I invite the good Vice President to just ask what she needs to know and we will respond.” He also clarified that the government did what needed to be done in terms of addressing the COVID-19 crisis and explained that if it weren’t for strict quarantine measures, we might have already recorded 200,000 deaths. Roque also called Robredo a pessimist for only fixating on the admin’s lapses.

On July 16, the Palace criticized Robredo’s COVID-19 response pitches, calling no fresh takes in her submissions. But to her credit, Robredo was able to achieve a number of accomplishments during the pandemic including helping distance learners and aiding frontliners among others.

SHARECome one, come all, humans and supernatural forces: If you’ve reached the end...