Ha.Mu, just like the rest of us, has grown a lot as a brand.

Young designers Abraham Guardian and Mamuro Oki are no longer mere Benildean fashion grads. Since turning their 2017 thesis into an actual brand, they’ve made waves in the local fashion scene with their maximalist-minimalist ready-to-wear and artisan pieces. It’s fun! Unorthodox! Very Ha.Mu!

Their designs are out there—literally. Inclusive for all sizes and fun to wear at the same time. If they’re not styling today’s who’s who of youth culture like Yeo Kaa or Ylona Garcia, they’re getting recognized in international fashion institutions such as the Palais de Tokyo or the MullenLowe Nova Awards.

It’s the youthful, happy-go-lucky, no-fucks-given energy of their work that make them hard to miss.

And how can you miss a Ha.Mu creation? It’s a good mix of eye-catching and unapologetic clothes in a sea of clear-cut, mainstream designs. No matter what collection they drop—they never fail to deliver.

This is apparent in their latest Egg Collection.

“An egg actually has been a symbol of life. Also, an actual egg can be used in many ways for cooking and an ingredient to bind things together. It resonates with our brand because I believe that we can be anything and can be perceived in many ways,” says Mamu. “Our work is ever changing depending on how someone utilizes it to their own preference.”

Ha.Mu’s Egg Collection symbolizes two things: origin and growth. Inspired by their 2017 Egg coat, this drop cements what the brand is about and where they intend to take it. It’s a simple concept amplified into coats, masks and even leather goods. They’ve expanded their medium yet their ethos remains the same.

“Since then, we have been working on creating pieces that bring joy to anyone who sees it or even owning it. I guess that’s how we have also valued clothes,” writes Ham in their mailing list. “It makes us happy knowing that we feel and look good in what we wear.”

Doing a casual kiki with these young designers, we talked about their hustle, evolving designs and the people they create clothes for.

“The mass market will only try something new, if there is some sort of approval or validation from the West. It’s something that young and up-and-coming designers like us are trying to change.”

Since you started, Ha.Mu’s growth has consistently expanded. What pushes you to keep on creating?Mamu: Our hunger for creating art. Sometimes we don’t even think of sales, which is bad for a business. Another thing that keeps us going is how we like dressing up. Sometimes, the clothes we do for ourselves turn out to be a new idea for a collection or something we could sell.

Ham: We really want to be a voice for those who firmly believe in the idea of self-expression through clothing. We also wanted to create solutions to our own personal struggles in fashion. We felt that there was a lack of quirky pieces for plus-sized individuals and we wanted to be able to do that ourselves.

Apart from aesthetics, what differentiates your Egg Collection from your previous drops?
Ham: Our Egg Collection mostly highlights the egg details used on essential items that we would bring with us daily.
Also, we did not work with complicated cuts or textiles. We also decided to venture into leather goods, which has helped us in developing a way of how to produce them for future developments. 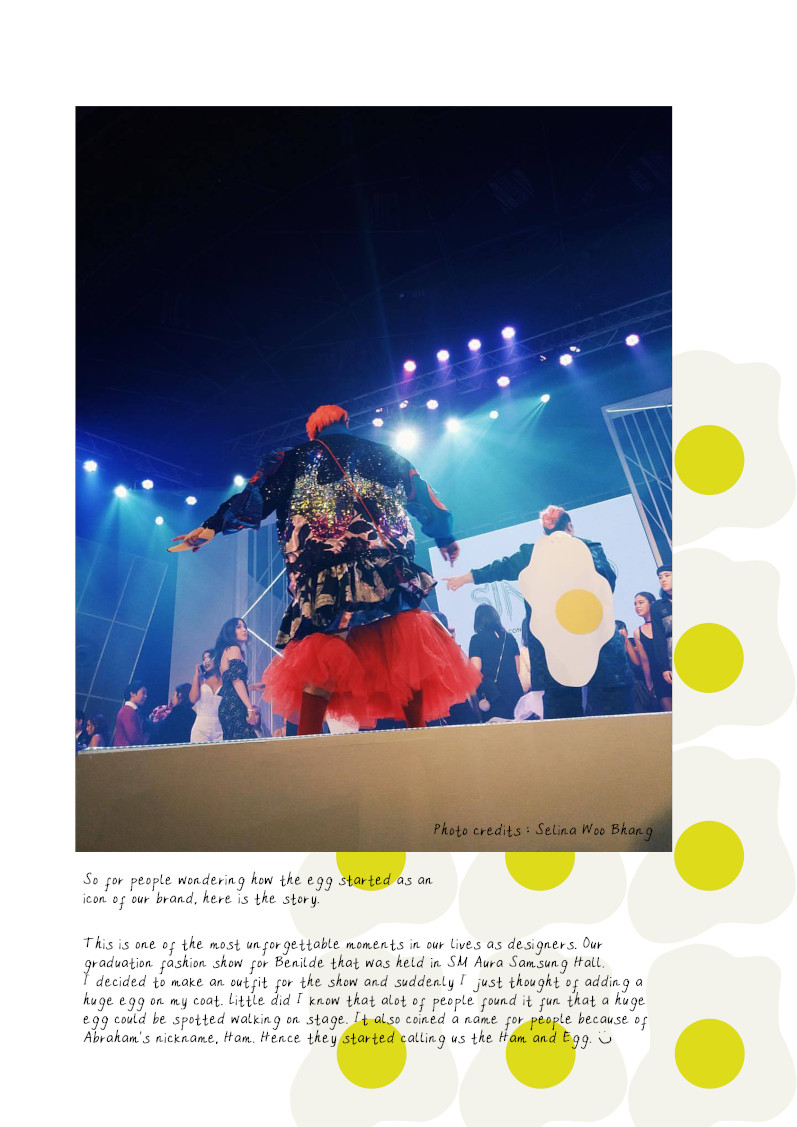 Could you walk us through the inspo for the Egg Collection? Why focus on an egg?
Mamu: This symbol of an egg started as an outfit for me because I wanted to make a coat for our graduation fashion show. I actually didn’t know that people took an interest in it. They said it was fun because there was a walking egg on the stage. From there, we actually used the egg as an icon of our brand.

Ham: Since then, we have developed the detail with simple silhouettes and pieces. We only tied the entire collection together during the pandemic while we were working with Basic Movement on the #maskformaskproject.

We noticed that people really appreciated the egg mask a lot! That’s why we decided to do new products with that detail, which birthed the cross body bag and the wallet.

“We felt that there was a lack of quirky pieces for plus-sized individuals and we wanted to be able to do that ourselves.”

What urged you to drop this new collection even if the world is a little absurd right now?
Mamu: This pandemic actually gave us time to work on new pieces. We wanted to show that life should go on, whatever happens. We should not be stagnant and always strive for the better.

Ham: This may sound cliche but during the first two to three months of the pandemic, I was starting to fear that our brand might lose its momentum. We might not have any customers in the next coming months because of the pandemic.Though times are tougher now, we still have to continue and carry on moving forward for a better tomorrow.

The Philippines has yet to embrace the “weird.” In your honest opinion, who are the people you envision wearing your clothes?
Mamu: Our country is actually slowly getting into that idea of weirdness; we actually envision a wider market that can carry the new line we did. Since it’s accessories, this is not as intimidating as clothes. The bags can be an upgrade to what they usually wear.

Ham: We envision anyone who is into quirky details, for people who have an eye for style and details and for anyone who is open-minded with how they wear their clothing.  I personally feel that the mass market will only try something new, if there is some sort of approval or validation from the West. It’s something that young and up-and-coming designers like us are trying to change.

“We have more than just couture wear to offer now worldwide and this is something everyone should look out for.”

Ham: We have a responsibility in shaping specific trends that represents us as Filipino designers. We are also responsible for shifting how the global market will perceive the new generation of designers that are coming from the Philippines. We have more than just couture wear to offer now worldwide and this is something everyone should look out for.

Read more:
Ha.Mu is a finalist in this year’s MullenLowe NOVA Awards
Leaders of the New Cool: Ha.Mu
Ha.Mu is bringing their maximalism/minimalist aesthetic to Paris this year

SHAREWant to know what Nadine Lustre in MCU will look like? Ask this...

For this week’s SCOUT Friday Picks, Leanne & Naara dish about their debut...

SHAREWe’ve long accepted defeat and made a TikTok account last month. We get...