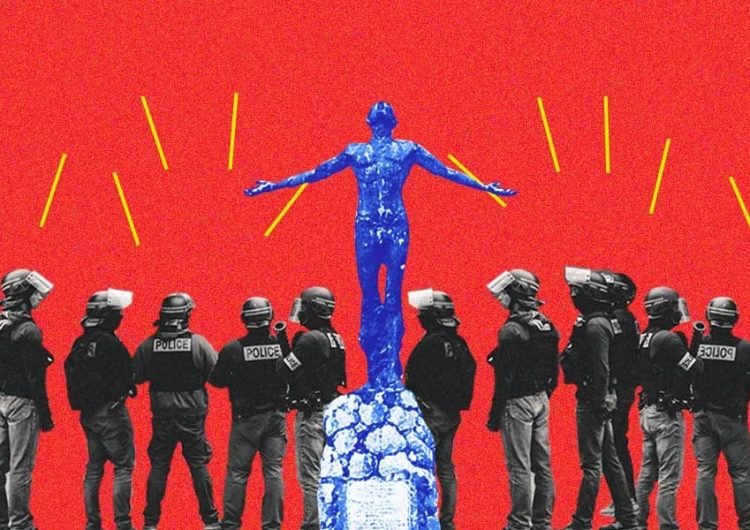 Every day, we experience worsening symptoms of our democracy getting curtailed—and this new attack on academic freedom is one.

Today, the Department of National Defense (DND) scrapped its three-decades-long agreement with the University of the Philippines. According to this accord: the police and military cannot enter UP campuses without informing  the university’s officials. But according to DND Secretary Delfin Lorenzana, the agreement  has been a “hindrance in providing effective security, safety, and (protecting the) welfare of the students, faculty, and employees of UP.”

The dominance of #DefendUP and #NoToCampusMilitarization hashtags in the wake of the agreement’s termination however proves the huge trust issues that students and most  Filipinos have with the police and the military. The assurance of  protection rings hollow; in fact, netizens suspect that the intention is quite the opposite.

Even before news of the scrapping broke, members of the UP community have reported the questionable  presence of the military and police in the campus. Here’s a quick recap of some of the sightings in recent years.

On Oct. 22, 2015, six men believed to be military agents were sent to the UP Diliman police (UPDP) for suspicious activities near the College of Education and Sunken Garden.

According to the Philippine Collegian, the university’s official student publication, the UPDP and Special Services Brigade (SSB) caught these men doing “surveillance” work on campus. The men were inside the campus as the  students were preparing for Manilakbayan: Kampuhan sa Diliman, an annual event where indigenous peoples (IPs) gather to express their grievances.

In a statement, Stop Lumad Killings Network said, ”The military has no right to be here especially now that we are preparing to host the Lumad who are being militarized in the countryside.” In recent years, the military is known to have accused Lumads of sympathizing with communist rebels.

After five days, the Armed Forces of the Philippines (AFP) defended the soldiers caught on campus. It was a ”transparent operation that was properly coordinated with the local police,” the AFP said. Even if then-Chancellor Michael Tan called out the incident as a violation of the UP-DND accord, the AFP insisted that surveillance wasn’t their intention.

On Aug. 20, students and faculty members had a campus-wide walkout in a rally against Sen. Ronald “Bato” Dela Rosa’s  suggestion:  Allow the police and military to hold an “indoctrination” in the state universities and colleges. This is to stop communists from brainwashing and recruiting students.

“I categorically deny that I agreed to allow the military and police to enter any University of the Philippines campus or property without coordination with the UP administration and UP Police,” UP President Danilo Concepcion said in response to the walkout.

The arrest of Cebu 8

At the height of the Anti-Terrorism Bill’s passage, an incident intensified people’s doubts about the then-proposed act.

On Jan. 5, three students, four members of progressive groups and one bystander were handcuffed by the police during a rally inside UP Cebu. According to the Cebu City police, these activists violated the ban on mass gatherings under general community quarantine protocols.

The protestors’ lawyer, Rey Fernandez, questioned the arrests as the police presence goes s against the UP-DND pact. In response, Brig. Gen. Alberto Ferrero of the Central Visayas Police argued that rallies have no place in a pandemic. “We are not against freedom of expression if we were only in a normal situation. But at present, we are in a pandemic,” he said. The protestors were freed after three days.

Of all the survey questionnaires UP Manila students receive, there’s one they were never prepared for: It’s titled “The Role of Social Media to (sic) Students of the University of the Philippines Manila on Violent Extremism and Insurgency.”

The Manila Collegian, the campus’ official student gazette, reported that the survey was conducted by the Philippine National Police (PNP). It made the rounds on campus in March 2018.

Vice Chancellor Nymia Pimentel-Simbulan said the survey wasn’t approved by the administration and that students were discouraged from participating in it.

(As a resolution, the administration has vowed to be stricter in securing the campus. It should also be ensured that all documents would undergo the proper process.)

“Policemen went to the residence of student regent Ivy Joy Taroma, looking for her without disclosing their reasons,” said several witnesses of three policemen who went to UP Diliman in Sept. 2018. The university further revealed that these men went to Palma Hall “presumably in continuation of their search.” What was their purpose, though?

Conception expressed concern about this random visit. “The UP community is deeply alarmed by this intrusion and the possible reasons for its undertaking, and I am writing to inquire (1) if you or your local superintendents were aware of, and authorized, this visit; and (2) if so, what its official purpose was,” his letter read.

“Student leaders cannot skirt police surveillance. It has reached a point when they were able to locate us, follow us even to our own homes. Where else can we be safe?” Taroma said in a statement, further questioning how the cops were able to trace where she was staying.

SHAREWe know, To All the Boys I’ve Loved Before seems like an indestructible...