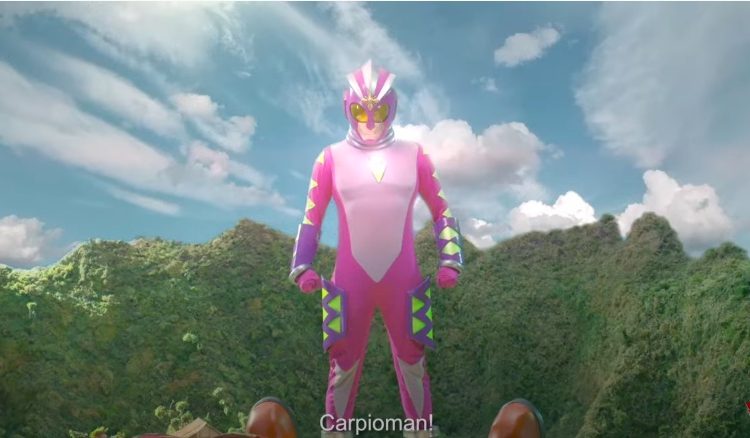 Once upon a time in the 1970s, tokusatsu shows from Japan not only lived in Filipino kids’ heads rent-free but also their afternoon rotations. I wasn’t there—obviously—but I felt like I lived through it, thanks to my family’s peak stan anecdotes.

Tokusatsu shows, they said, looked like this: hometown heroes wearing eye candy ‘fits (color-coded suits help you recognize them individually), gigantic monsters, robots, space jets flying through the sky and making you feel small but also empowered to fight with the protagonist. It was slightly absurd, but that’s the fun in it.

Sometime in 2016, I realized I watched a film similar to tokusatsu in Cinematheque Centre Manila. It was “Blue Bustamante,” a Miko Livelo-directed heartwarming drama-comedy flick about an OFW father who ends up playing a superhero in a Japanese TV show. Years later, Livelo is directing another narrative now with Mihk Vergara (“Patintero”) in the same breadth: “Carpioman.”

Together with their team that includes digital creator-former Spongecola member Chris Cantada, “Carpioman” now exists online as what they call an OG Filipino tokusatsu show. Posted on the Chris Cantada Force YouTube page, the pilot episode has offered us an enjoyable start.

In a world where giant monster invasions are likened to typhoon signals, Nardo (Jerald Napoles), a struggling single (surrogate) father to fourth grader Tonet (Miel Espinoza), is cursed with superpowers that turn him into the purple-suited Gigantic Archipelago Defender Carpioman. Or Carpioman for short.

Yes, it pays tribute to Japanese tokusatsu shows like “Ultraman.” But watching its pilot episode proves its own charm. If this takes over weekday afternoons—like how the first tokusatsu shows were back then—I wouldn’t be surprised.

Here are some reasons why you should give it a try:

The hero is not one-dimensional

Nardo, a farmer in his normal life, isn’t exactly keen on the idea that he’s a superhero. His forehead furrows at the thought that his daughter Tonet expects him to be a better fighter. Nardo’s internal struggles, insecurities and lack of resources get in the way of seeing himself as someone people should look up to.

We have yet to know more about him, but there’s this subtle aspect that makes us root for Nardo not mainly because he saves but because he’s a human we can connect with.

You’ll probably say this is quite a reach, but that short scene tells us the truth. In a show-and-tell segment in class, Tonet hides from her teacher as she’s ashamed of telling her classmates that her father is a farmer—one of the reasons why she’s being ridiculed. Her classmates had salesmen and doctors for dads, but we’re proud of Tonet for still stepping up front to share what Nardo does for a living.

However, one of her bullies called her out during her presentation, demanding her to speak in English instead of Filipino. This reminds me of my co-writer Kat’s call-to-action masked as an article: Please let kids watch Filipino-dubbed cartoons.

The jokes are actually good

You’d think the usual slapsticks or some cheesy-corny banters will dominate this one, but no. Surprisingly so, the show feels nostalgic and fresh for its comedic timing and balance. S/O to Ms. Pearl for having laughable quirks and an interesting classroom. (Please peep the bulletin board and other wall postings to understand where I’m coming from.)

It’s warm, cute and a total trip. The effects, costumes, idyllic slice-of-life scenery scream quality production. What’s not to like?

In a country where transgender lives are oppressed, their narratives in Filipino cinema...

SHAREWe can’t believe we missed this―NASA’s about to launch a rover to Mars,...