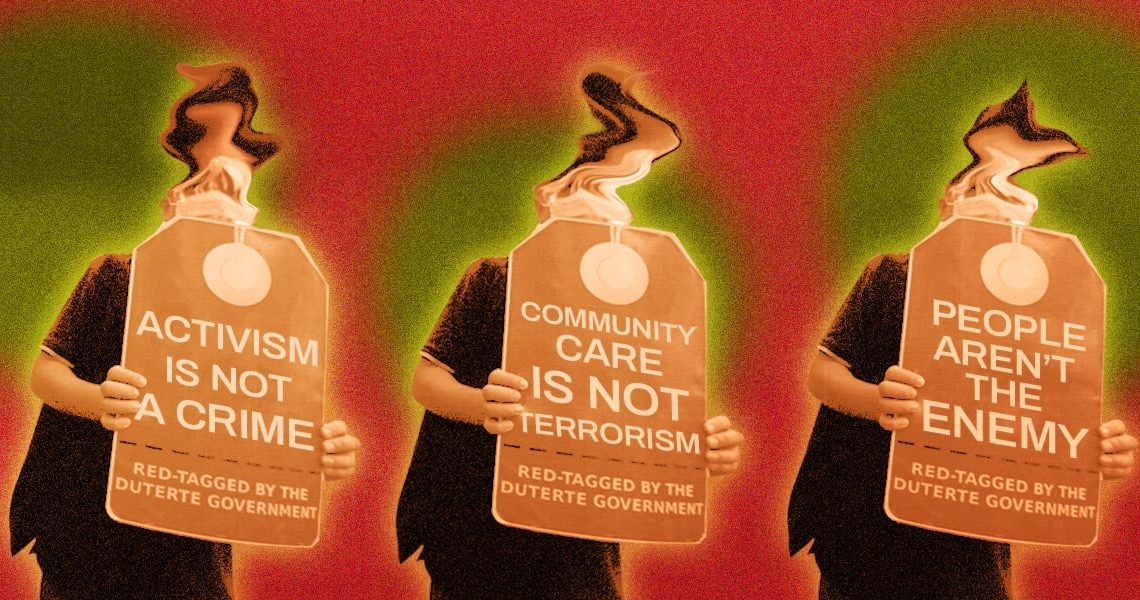 As if people aren’t anxious about too many things already—job security, basic needs and health to name a few—citizens also need to bear the threat of red-tagging during a pandemic.

Red-tagging, according to human rights activists, is a scheme in which individuals are labeled as communists or terrorists, often without substantial proof. It’s also a way to silence activists. Being red-tagged can lead to warrantless arrests, torture, enforced disappearances or extrajudicial killings according to International Peace Observers Network. The danger in this tactic has heightened more now that the Anti-Terrorism Law is in the picture.

In case the people in power try to make us forget someday, here’s a list of individuals and groups red-tagged during this crisis.

(It’s saddening that we cannot distribute the goods that we prepared the whole day because of the red-tagging that has been happening.)

Along with her statements are screenshots of posts showing how the National Task Force to End Local Communist Conflict (NTF-Elcac) linked the pantry to communist groups, claiming that it was a tool to promote the CPP-NPA-NDF.

In a translated report by Washington Post reporter Regine Cabato from today’s press con, Non expressed her disappointment. “We find the government response lacking. People wouldn’t line up like this if they were getting enough. We’re not asking the government or people to understand or have the same political beliefs—I’m only asking for unity, and not to kill this effort to help each other out.”

Even the nicest of deeds filled with fruits and vegetables are dangerous for these people now, apparently.

This same month, the Department of Education (DepEd) drew flak for failing to defend teachers’ democracy. The Alliance of Concerned Teachers (ACT) said that Revsee Escobedo, DepEd undersecretary, had asked division offices to distribute a survey profiling the members of ACT or Teachers’ Dignity Coalition (TDC). The reason? Nothing specific.

NTF-Elcac has been tagging ACT as a communist group, although they’ve failed to offer evidence, Inquirer reports

(In their PowerPoint presentation, NTF-Elcac repeatedly claimed that ACT and other legal organizations are fronts of the [Communist Party of the Philippines-New People’s Army.])

“Such distraction in the midst of the COVID-19 pandemic is indeed reprehensible,” said Emmanuel Layco, president of Pamantasan ng Lungsod ng Maynila (PLM) last January. This was after the university had cried foul over the military calling PLM a recruitment hub for communists. Layco described this as a “disservice” to the faculty, students and staff struggling during the crisis.

The University of the Philippines was also dubbed a hotbed of rebels. President Duterte said so himself.

In a public address in November 2020, President Duterte spoke about the death of Jevilyn Cullamat, daughter of Bayan Muna Representative and indigenous Manobo tribe leader Eufemia Cullamat. The 22-year-old Jevilyn died during an encounter between the military and the New People’s Army (NPA) in Surigao Del Sur.

Before mentioning this, he didn’t spare groups like the Makabayan bloc from red-tagging. He called these “legal communist fronts.”

Despite calls for protection, Indigenous peoples have been suffering trying to live through threats of school bombings and defending their lands from exploitation, among other things.

The Philippines is the second deadliest country in Asia for land rights defenders, as revealed by environment and human rights watchdog Global Witness.

These are just a few from a long list of folks stripped off humanity and robbed of security by irresponsible labeling. Instead of villainizing every citizen who speaks up, why can’t our leaders listen first? In this narrative, the people are definitely not the villains.

‘Spoliarium 2k20’ mirrors the horrors of our political landscape

SHAREBy Nico Pascual Image: CultofMac Twitter is doing all that it can to...