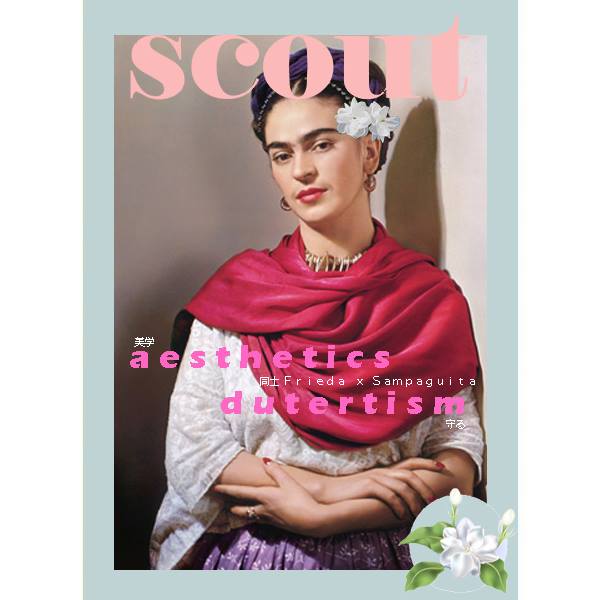 “Maybe you have misunderstood our movement but [Dutertism] is definitely not anti-Duterte,” they explain when I asked if they have a problem with Duterte’s blunt statements. They being 同士 Ｆｒｉｅｄａ and Ｓａｍｐａｇｕｉｔａ, the creators of the Facebook page that has founded Dutertism, and in turn made a couple of internet enemies. They are only two  of Ｖｉｒｔｕａｌ Ｂａｒａｎｇａｙ ホー‘s Sining Kagawad (SK) and as such they share images in the same vaporwave fashion. But what separates Dutertism from vaporwave is their images are political in nature and local in context.

Dutertism, as they describe it, is “an attempt to understand the unpredictable executive policies of Pres. Duterte.” They get their fair share of hate messages and detractors long before they coined the term for the art movement, I presume, but they’re fresh in the sense that they’re distinguishable from the stale and ugly political drivel that calls itself discourse happening on our social media pages today. As with any creators of Facebook pages like theirs, I don’t have a clue about who they are, but in the digital age of smoke and mirrors, anonymity proves advantageous for them since they’ve been riling a lot of people up.

I chatted up with the anonymous creators to talk about the art movement they’ve begun.

Is Dutertism concerned with Duterte’s statements, his administration, or something else?

Dutertism was inspired by our President Duterte. Dutertism is not about all his statements and administration. Dutertism is about exposing the problems of our society, criticizing the rotten system of the Philippine society and propagating to the masses the concept of national democratic politics. Also, this is one way of promoting mass-oriented arts and culture. (Fuck copyright!)

Given its nature in relation to vaporwave, do you use the movement as a serious political critique? Are you afraid the movement will be dismissed as mere memes?

We consider Dutertism as a serious political critique. We don’t just create political memes and such. Validation of the source, analyzing the news and observing the political situation are just some of the things we do before creating an artwork that will be posted and distributed in the internet.

Dutertism cannot be simply dismissed as a simple meme or could never be reduced to a simple meme. As stated in the definition we made for Dutertism, it is a movement started by some middle-age teenagers suffering from crippling depression wrought by imperialism, bureaucrat-capitalism and feudalism. It has its political foundation—the national democratic political theory, unlike the other ones who were just making memes for their self-interest or for the interest of their favorite (traditional) politician. We put our theories into our art and we don’t make art based just on our personal experience (empiricism).

What are other art movements that you can cite as parallels?

Dutertism has similarities to Dadaism when it comes to having political affinities with the radical left. We can say that Dutertism is a vaporwave in the Philippine economic, political and cultural context. The same with vaporwave in the international movement, it is anti-capitalist and its visual art (Ａ Ｅ Ｓ Ｔ Ｈ Ｅ Ｔ Ｉ Ｃ Ｓ) contains neon colors, ’80s, ’90s and early 2000s aesthetics but with national democratic political theory.

What are your projects for the future?

As we are gaining more attention from the masses (based on the insights provided by Facebook, our followers and readers are mostly in the age of 18-24 years old), we are planning to set exhibits in the future together with other vaporwave artists and Dutertism artists as a collective. These exhibits will be our way to introduce and promote these art movements to the millennials and will also be our way to propagate against the imperialist culture being stimulated by the Imperialist United States of America.

What is the end goal?

One of our goals is to be recognized as a mainstream art movement in the Philippines and to promote a mass-oriented and patriotic arts and culture.

同士 Ｆｒｉｅｄａ and Ｓａｍｐａｇｕｉｔａ made their own version of a Scout cover. After they sent it via Facebook Messenger, they added, “I have just violated your copyright.

but that’s vaporwave and I did it in a good way .

” I imagine the people I’m talking to are smiling. It looks pretty rad.