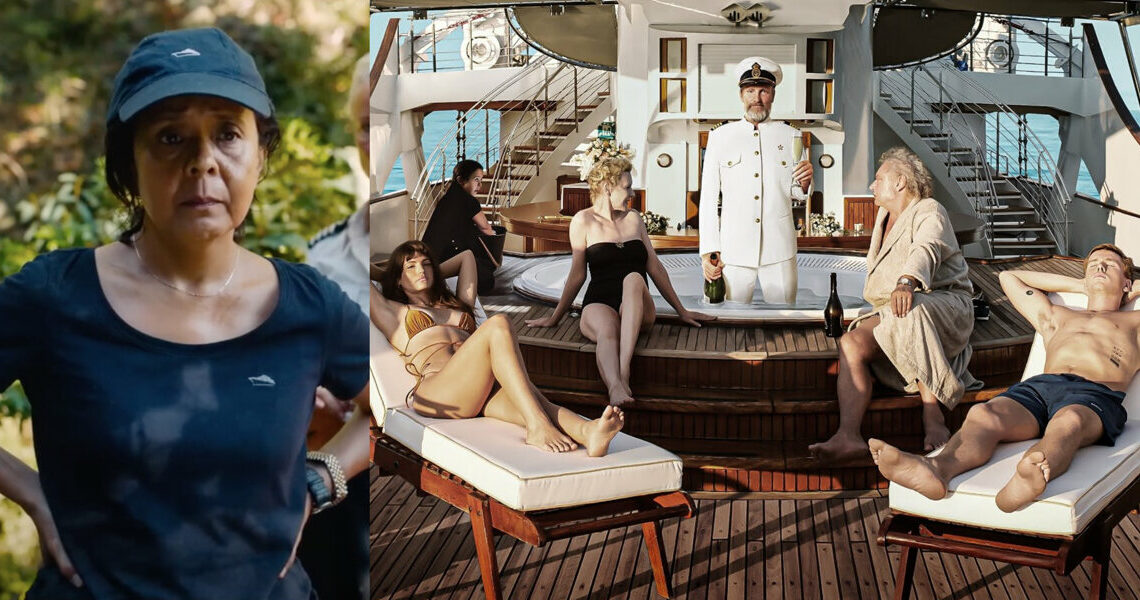 What do you think would happen if the social ladder turns upside down overnight? What if someone whose job is considered lowly by society suddenly had to take over and lead the privileged? Would justice and fairness finally prevail? Or would greed and thirst for power still rule at the end of the day?

Ruben Östlund’s (viciously) satirical comedy film “Triangle of Sadness” has all of the answers… well, almost. It follows the story of a fashion model couple Carl (Harris Dickinson) and Yaya (Charlbi Dean) who are invited to a luxury cruise for the high society. But since the yacht is skippered by a drunk captain, it inevitably capsizes the moment they pass through a storm. Only a few people survive—finding themselves stuck on a desert island—including housekeeper Abigail (Dolly de Leon) who’s apparently the sole survivor with survival skills. Because of this, an upside-down social hierarchy is established and everyone has to abide by Abigail’s command to live.

It’s a hilarious film imbued with sarcasm and irony—but it’s also a biting social satire that goes straight to the heart of the matter: class inequality, abuse of power, and a flourishing culture of luxury, superficiality, and self-centeredness. Aside from winning Palme d’Or for Best Picture at the Cannes Film Festival in May 2022, Dolly’s performance in it was such a revelation that it made her the first-ever Filipina to be nominated for a Golden Globe award. The ending remains a mystery to me, though, and you’d know what I mean if you watch it yourself.

But where exactly can you watch “Triangle of Sadness”?

While it isn’t available for online streaming (at least for now) and only had a limited local run during the last quarter of 2022, Cinematheque Centre Manila extends its “Triangle of Sadness” special screening from Jan. 12 to 14 at the FDCP Cinematheque Centres in Manila, Iloilo, Davao, Bacolod, and Nabunturan.

Want to make the most of your Cinematheque visit? Cannes Camera d’Or Special Mention Awardee “Plan 75” will also get a special screening within the same weekend. For those unfamiliar, “Plan 75” is a Japanese dystopian film about a government program of the same name that aims to “remedy an aged society” by encouraging the elderly to volunteer themselves for euthanasia. Japan-based Filipino actress Stefanie Arianne is part of its cast.

(P.S. Make sure to book your tickets in advance to secure your seats!)

Photos from “Triangle of Sadness” poster and trailer