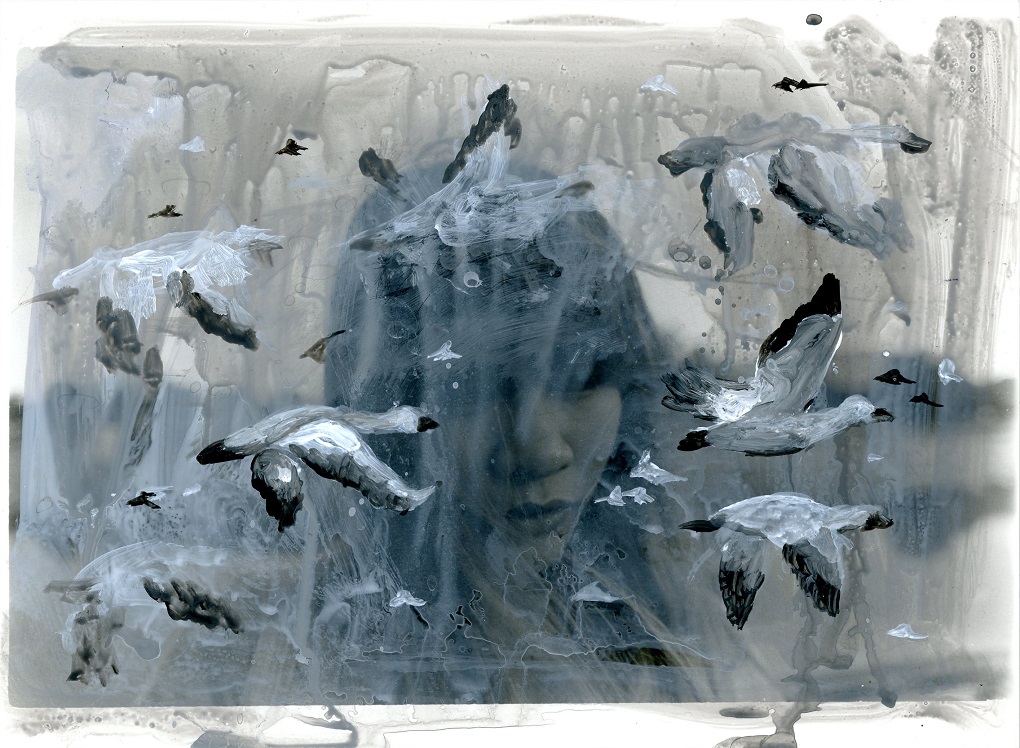 Being in your 20’s can get rough, especially if you’re like Marikina-based 26-year-old visual artist Teo Esguerra, who’s been going through what you might describe as a quarter-life crisis. Employed as a creative designer at a well-known brand by day and an artist by night, he’s taken his feelings of anxiety, insecurity and doubtfulness for his future and created 13 pieces of mixed media paintings and box houses for his ongoing second solo exhibition Migrations at gallery Vinyl on Vinyl.

Inspired by his 12-day trip with his girlfriend around cities in Japan: Tokyo, Kyoto, Nara and Osaka, earlier this year in February, the exhibit features 7 paintings and 6 box houses centralized around the imagery of birds. Carrying a style that he describes as personal and quiet, Teo notably harmonizes his two passions of photography and painting by using printouts of birds he’s photographed during his trip to Japan as a canvas for his paintings. Probing viewers to feel “anything at all,” he asks you to look at his art with a kindness that is mindful of the struggles he is facing as he introspectively peers into the future, contemplating, thinking, pondering on where and what to do next.

How did you get into art?

As far as I know, I’ve always been into drawing. As a kid I used to copy illustrations of comics I read, but I think it was during high school when one of my classmates brought a book about graffiti to school when I decided to pursue art. After graduating high school, I went to FEU to major in Fine Arts and that’s when I began to join group shows and exhibiting.

Is it during college when you began painting acrylic over photos?

No, it was actually after college already, when I discovered my love for analog photography. Maybe about 5 years ago? I started printing my own photos in a darkroom and I realized andameng nasasayang na papel. So I began to paint over scrap photos. Tas yun dun na, nagstart ko madiscover yung gusto ko maging itsura ng art ko, na ako talaga.

In your own words, how would you describe your art?

Personal. My art is always personal. It’s almost always about how I feel. Tiyaka siguro tahimik. That’s the best word I can think of. My experiences in life are my primary source of inspiration when it comes to my art. Also music and movies, but it’s mostly driven by my emotions.

So what’s the “emotion” that inspired you to make Migrations?

Migrations is my second solo exhibit after Beach Houses held last year, also at Vinyl on Vinyl. It’s about me still unsure of my path as an artist. It’s about me being worried if I will succeed or not. It’s about me looking into the future and thinking that I still haven’t gotten somewhere with my craft, but hoping one day that I can make it my full-time job.

Why did you name it “Migrations”?

It’s titled “Migrations” because when I think of animals, I think of how they naturally do things like migrate to accommodate to their needs like food, breeding and proper living conditions. I’m fascinated by how animals just know where to go and what to do with their future. Like the act of migrating, it’s like “Oh it’s winter, I’m going to migrate.” And then there’s me, I have completely no idea where I’m going and what I’m going to do for my “future.”

Out of all animals why birds?

Well, when you say migration, usually the first thing that comes to mind are birds. And well, I’m also into bird watching. There’s this peaceful feeling that I get or serenity I see when they’re flying, so I really wanted to incorporate the “flying” into the pieces because it’s like a symbolism for knowing where you want to go and “flying” there. There’s this movie The Big Year, it’s about people who are addicted to bird watching. It’s a really great movie. It’s actually one of my main inspirations for this exhibit, as well as these birds I saw at Ueno Park while at Tokyo. It’s really different out there, lumalapit talaga yung mga ibon.

So these birds are all birds from Japan?

Yes! All the birds are photos of birds I took while I was on vacation in Japan.

So do the photos come first, or the art?

My process starts in conceptualizing. Matagal ako mag-isip. I’ll be thinking constantly for days, weeks, even months. Tas constant din ako mag-shoot ng photos. So usually, when I’m done thinking of a concept, that’s when I go back to my photos and browse. That’s when I choose which photos and in what way to paint over the photos. If it’s just a small piece I’m making then I’ll print it myself in a darkroom, but if it’s big I’ll have it printed at a studio then that’s when I begin to paint.

Can you walk us through your art in the exhibit piece by piece?

From there the pieces progress from resting to “migrating,” with migrating representing “success.” The pieces with houses and migratory birds are actually really personal for me. It’s a painting of my childhood home, so it’s about me contemplating on leaving and thinking about all the feelings I’d feel when I leave or “migrate.”

The airplane is a representation of fear of failure.

While the piece with many bird houses is symbolic of ‘yung mga tao sa generation ko, ‘yung mga struggling, pare-pareho kaming nasa resting place, hindi pa nakakalipad. It’s my favorite piece out of everything. Makes me feel like I’m not on my own.

I found the box houses especially striking. Where did you get this idea?

The houses in general are inspired by the idea that my mother is an architect and I think that makes it close to my heart. Yoshitomo Nara’s A to Z show also was a big influence for the houses. The peephole houses is inspired by our trip to the Ghibli Museum!

Is there a reason why your artworks are mostly monochromatic?

Kasi simple yung black and white. When I started painting again a few years ago,  I told myself that I want to focus on showing the feelings to my work. So gusto ko simple lang, 2 paints lang ginagamit ko most of the time. I want people to look at the image at hand rather than it being too complicated. I just want people to feel something when they look at my art. I think that’s what’s important.

Migrations is showing at 2135 Chino Roces Avenue Makati at Vinyl on Vinyl Gallery until July 6, 2017.

Just a couple of days after a controversial oath-taking, the Duterte Youth is...