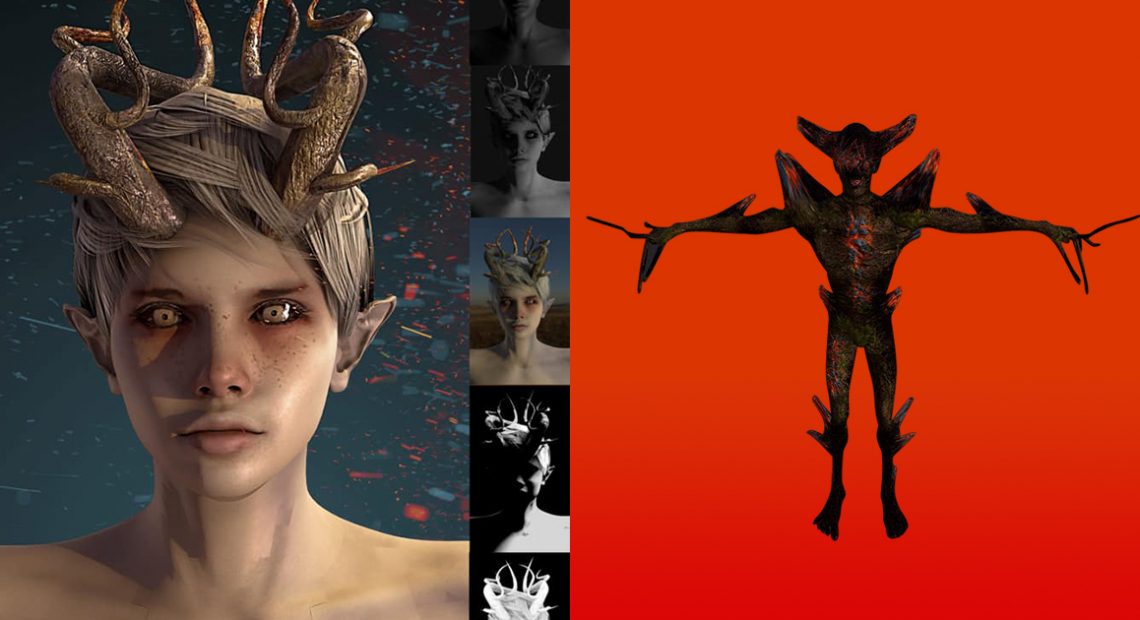 Philippine mythology deserves a little more respect and love. But in mainstream media, that love seems to be a bit lost. We have teleseryes mimicking Norse mythos or ripping off DC franchises. Meanwhile, our beloved engkantos, kibaan, and mangagatoks are all shaking their head in dismay as they rant: “Hey sis, why not tell our stories instead of this unoriginal crap?”

Read more: “Ang Ospital” is a Filipino horror game made by students from Caloocan

“Despite everything, I believe nobody can make Balete City and tell Aki’s story the way Filipinos can. If anyone’s going to showcase our culture, it might as well be us.”

Balete City started out as a graphic novel on Philippine Mythology. But Niley saw the promise and reach of RPG as a medium to showcase the opulence of Philippine mythology.

It’s not easy to create a game like Balete City, but Niley is determined to complete it and share it to the world soon. “Creating a video game is not easy, wherever you’re from. Despite everything, I believe nobody can make Balete City and tell Aki’s story the way Filipinos can. If anyone’s going to showcase our culture, it might as well be us,” he tells us.

We got an opportunity to chat with Niley on how underrated Philippine mythology is, the difficulties Filipino game developers face, and why he created Balete City.

Tell us a little bit about yourself.
My name is Niley Bacolcol. I’m a 27-year-old creative designer here in the UAE for the past several years.

What drew you to Philippine legends and mythos?
It started when I discovered the wonderful world of spirits and diwatas while I was doing my undergraduate thesis with the T’boli tribe. I was working on the T’boli group’s belief system and how it was integrated into their lives.

It ignited a fire within me to further explore the tribe’s rich culture. I continued my discovery into the mysterious underworld of Philippine mythology. As I dug further into the tales and stories, concepts started brewing in my mind. Not long after this, I came across some of the contemporary works of our local komiks artists such as Kael Molo’s Agla and Mervin Malonzo’s Tabi Po.

That’s when I finally decided to gather the ideas and concepts in my head and put them down on paper. Even though I couldn’t write that well, I persisted. I was lucky enough to meet Geordane Tabo-oy, who’s a great writer. He helped me turn my ideas into an actual novel. That’s when Balete City High came into fruition.

“It got me to thinking ‘What if a game like this can be based on our Philippine culture? What will the gameplay look like if the game scenes are with Philippine scenarios? How would it look if the characters are based from Philippine Mythology creatures?'”

What pushed you to turn Balete City into a video game?
Although I am not an avid gamer, I’ve always been a big fan of video games for a very long time. I love watching gameplays of different games with stunning visuals and rich storylines such as God of War and Witcher. These games are heavily based on a certain culture.

Laki, a bipedal creature in Bicolano folklore who has a knack for scaring people at night with its shrill voice.

It got me thinking, “What if a game like this is based on Philippine culture? What will the gameplay look like if the game scenes are done with Philippine scenarios? How would it look if the characters are based on creatures from Philippine Mythology?”

After years of accumulating skills in game design through my creative work, I realized that I could use these same skills to transform the novel into a game.

Read more: Attention, gamers: You can join the Southeast Asian Games next year

Did you see video games as a better medium to tell this story?
I’m not saying one is better than the other. We are rooting for its deeper purpose, which is to promote and to reintroduce our cultural beliefs and mythology to the younger generations and to the global crowd. In that way, creating this video game simply means we will be able to maximize the technology we have as a means of preserving our culture, creature tales, and tradition.

“Balete City now is a crowdsourced initiative that aims to collaborate with local cultural groups to promote, educate and preserve our fading or forgotten roots.”

Could you tell us more about Balete City and some of its main characters?
It’s now a crowdsourced initiative that aims to collaborate with local cultural groups to promote, educate and preserve our fading or forgotten roots.

In this game, you’ll play the role of Aki. In the story, Aki has to go to Balete High for senior high school in order to find clues about his brother’s mysterious death. There, he will meet amazing characters who will help him discover the anomalies and mysterious happenings inside the school. Later on, he will discover that he is one of the last Asog, a Babaylan in training. And his main objective is to attain the full powers of a babaylan.

Today’s media has barely scratched the surface of the vastly rich culture of our mythology. These stories are in danger of being forgotten and are begging to be retold.

How would the gameplay go?
First, Aki needs to be chosen by a familiar or a spirit companion. Then, he has to learn how to brew potions by using local medicinal herbs and other uncommon ingredients found in the game. He also needs to learn sacred symbols, ancient Filipino text, and sigils, as well as how to wield them. Finally, he needs to combine all of those to summon spirits from other realms.

A look into the player’s inventory in the RPG.

There will also be battles featuring native Filipino weapons and tools. We are actually aiming for the bare minimum as of now and make the game work. We know that, as we move on in the development, we will stumble upon some new tech and systems that might make it to the actual game.

There will be a semi-open world, some inventory systems, character progression, quest systems, companion systems, and craft systems.

Do you think Philippine Mythology is underrated in our current media landscape?
I believe it’s very underrated. Karl Gaverza’s research (from the Spirits of the Philippine Archipelago) alone contains files upon files on divinities and mythological creatures. They sum up to over 1,000 individual beings coming from different groups and regions with different names, stories, qualities, and magical properties.We were lucky enough that he shared it with us.

Today’s media has barely scratched the surface of the vastly rich culture of our mythology. These stories are in danger of being forgotten and are begging to be retold. Balete City aims to bring them to life and go beyond the dwendes, aswangs, kapres, and nuno sa punso.

Read more: This RPG game is about a heist for unreleased Carly Rae Jepsen songs

How can we support this initiative?
As we don’t have investors or other sources of funds for this project, we are crowdsourcing. Patreon makes it easier to kickstart the project into high gear. Within a week of revealing our project, we jumped from two to 29 patrons in our Balete City Game Patreon account.

Ek ek, bird-like creatures who search for their victims at night.

I am also happy to share that with our call for volunteers and contributors for this project, we received hundreds of emails on volunteering for various roles, from game development to marketing and even research.

“We can only hope efforts like ours help inspire more people to make games and art that is ‘sariling atin,’ something we can show off to the world and be proud of.”

The Pinoy gaming industry is still quite small compared to those abroad, but it is alive and well. I am glad that there is an increasing amount of support coming from schools and game companies themselves to open up more opportunities for the youth.

We can only hope efforts like ours help inspire more people to make games and art that is “sariling atin,” something we can show off to the world and be proud of.

When can we see Balete City’s first beta testing?
We are hoping to have something ready for testing as early next year, so keep your fingers crossed!

This story is part of our #SeenOnScout series, which puts the spotlight on young creatives and their body of work. David and many other creatives shared their work at our own community hub at Scout Family and Friends. Join the Scout Family & Friends Facebook group right here, and share your work with us in the group or through using #SeenOnScout on Twitter and Instagram.

Who knew that excitedly unboxing a Chewbacca mask would make someone an internet...