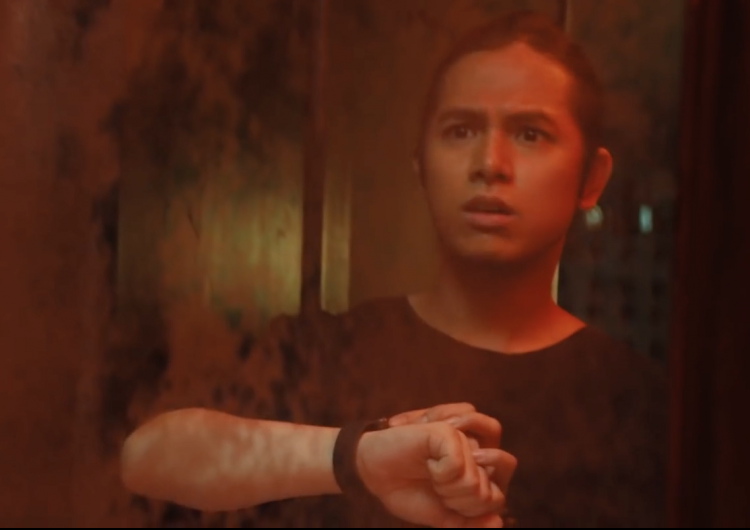 My love for Filipino hip-hop artist Abra comes with familiarity (as most kinds of love function, I guess). This means my sight of him is suspended in the underbelly of Manila featured in the award-winning Cinemalaya film Respeto (2017).  On the side, most of his music videos manifest how much he lives and breathes as the posterboy of Pinoy street rap–roaring applauses follow in every figurative mic drop.

These long-standing points take a drastically weird turn in this music video, however. Seriously, even I furrowed my brows as I awaited the autoplay button of YouTube for the next Abra MV that looks much more…acceptable.

You see, it starts in a bar. Nope, he’s not going to perform, but it’s still odd seeing him clad in an ordinary black shirt and an awkward ponytail. The typical Abra brand of angas isn’t exactly there, though he tries this multiple times as he eyes on a captivating woman talking to her friends. We’ve witnessed him as the one getting chased after in most situations, but this one has made him a person of pleads: drinks, a flower, and the classic “can I ask for your number?” Later, the woman doesn’t bother giving anything beyond a judgmental stare.

What could be the problem? Every time he gets rejected, he warps back to the comfort room, and the time goes back to 9:30 p.m. Thanks to some weird-ass time travel in the MV’s universe, he’s given another chance each time he fails, until he’s too tired to do so. That is, until the suspiciously very friendly bartender approaches him. All smiles. Humanized optimism. Nah, she doesn’t try to be the manic pixie dream girl of the story. Instead, she turns to a fairy upon giving Abra a malunggay concoction.

The transition got me what-the-hecking my way out of the MV.

Now, is Abra drinking the new version of the Gayuma he rapped about in 2013? Not really? Before I could even wonder more, he is handed by the bartender fairy a tall bottle of an all-natural herbal anti-dandruff Blue Moringa-O² shampoo. And just like that, he magically shifts in different garments, now without that weird ponytail. Abra then realizes that his really, really bad hair was the suspect. But is it the only one?

We see him hanging out with two girls at the end of the MV, supposedly making the captivating woman jealous. She does seem to feel that way, but as someone who repeatedly watched this video for all its craziness, I must say it boils down to how he managed to boost his self-confidence from getting a hold of that shampoo. As cheesy as it may sound, that act pushed him to be natural, without fuss, without plead–and had him discern that the girl he was initially pining for wasn’t worth the time after all.

What a strange experience, but I’ll have my cheers to this otherworldly story.

If you’re not aware by now, ISIS has been recruiting potential members through...