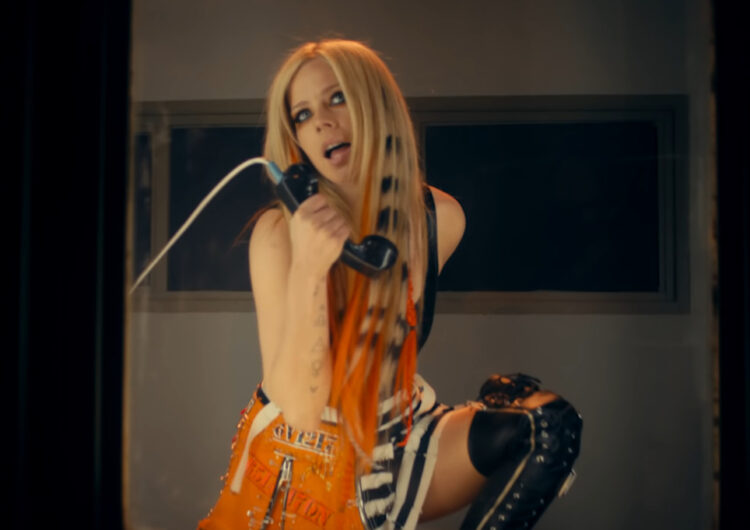 In case you haven’t heard, the emo and scene renaissance is still upon us. And one of those championing it is, to no one’s surprise, pop-rock queen Avril Lavigne herself.

If you haven’t caught up in Avril news since 2007, then let me give you a quick run-through of these past few months: First, she’s cooking up a “Sk8er Boi” movie. Second, she has new music out with her latest album “Love Sux.” And with a new album comes singles and music videos—most notably, “Love It When You Hate Me.”

There’s newer stuff thrown into the mix—those are Blackbear on vocals and Blink-182’s Travis Barker on drums—but like your 2000s punky phase in Where’s Waldo form, you can spot several quintessential Avril Lavigne elements happening. With a guitar on hand, she rocks out inside a jail cell, sings along into a telephone, and—wait, was that a raccoon hairstreak?

Avril sports striped extensions with chunky orange highlights that are paired with her role’s uniform with matching colors. The horizontal highlights were a particular favorite for the scene folks of the mid-2000s, notably remembered from internet scene queen Kiki Kannibal’s look.

This isn’t exactly the first early aughts trend that has seen a resurgence lately. Thanks partly to TikTok, big scene hair has experienced a renaissance of sorts with the subculture back in the limelight. Back in January, news of When We Were Young—a music festival featuring acts like My Chemical Romance, Paramore, and yes, Avril herself—reawakened emo phases everywhere. Or was it even a phase?

If you were to ask modern Filipino emo enthusiasts, then, nah. But if you feel a li’l rusty and ready to jump back into it just like the rest of the internet, then sporting Avril’s raccoon highlights might be a start. (Or you can loop the MV to absorb the emo back in—whatever floats your boat.)

Read more:
Cutting your bangs is dead, long live rainbow bangs
Move over pastel dyes, the holographic hair trend is about to take over
Gen Z is bringing emo and scene back from the dead. Just ask this content creator

Still from “Love It When You Hate Me”