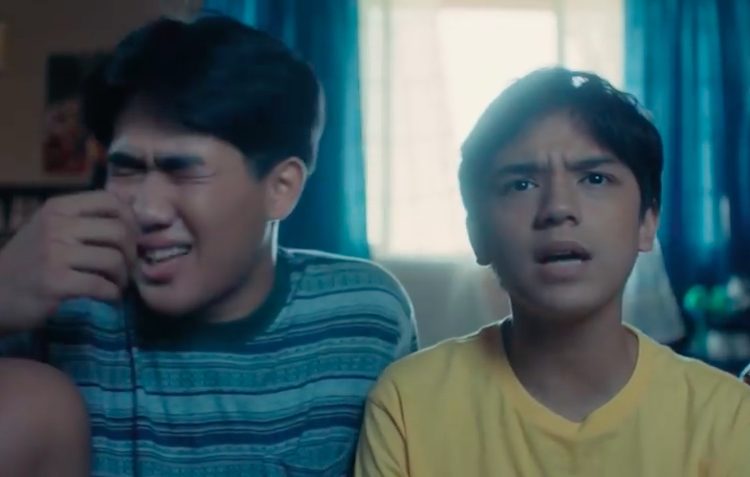 What’s your fondest memory of the ’90s? Is it hearing the trippy sound of internet dial-ups? Browsing through VCDs in rental places after school? Or purchasing some plastic balloons at your nearby sari-sari store? That era was teeming with unique experiences, but there are certain things that convince us we might have actually had the same childhood: one such thing being 16-bit video games. (Fighting over who gets the coolest controller is optional.)

This nostalgic narrative is about to come back, back, back in the coming-of-age film “Death of Nintendo.” The story unfolds as a series of earthquakes leading up to Mt. Pinatubo’s volcanic eruption has been causing blackouts across the country. This leads up to kids being prevented from playing video games.

This film follows the self-discovery and (mis)adventures of four video game-crazed teenage friends Paolo, Kachi and Gilligan as they figure out adolescence. After roaming the streets and getting beaten up, they decide that traditional circumcision is the end of all these troubles. Eventually, Paolo deals with the horrors of puppy love.

Directed by Raya Martin and written and produced by Valerie Castillo-Martinez, this movie set in the outskirts of ’90s Manila also serves as the two collaborators’ way to reconnect as childhood friends. “Death of Nintendo” aims to preserve their memories as much as ours.

According to Martinez, the “Smaller and Smaller Circles” director’s understanding of the “nuances of the all cultural specificities” of the time “Death of Nintendo” was set is an important element of the story. “Raya and I grew up in the same middle-class neighborhood and attended the same elementary school for 12 years. What’s more is that we wanted the Philippines to be depicted specifically to our experience and not be exoticized or serve certain cultural stereotypes involving extreme poverty or crime,” she adds.

“Death of Nintendo” loosely originates from Martinez’s experiences while growing up in the Philippines before moving to the US. “I was at a midpoint in my life. I’ve spent almost an equal amount of years living in the US and the Philippines and I started fearing losing my childhood memories. It made me think of the simplest times I had growing up and summers in the Philippines. The ’90s, in particular, were special,” she reveals.

As for Martin, he felt this was an important story to tell having grown up queer in the ’90s. “Val and I had the exact same Catholic suburban-bred world being schoolmates. I also remember it was the beginning of the Internet aside from the console wars, so we were really fascinated between this virtual new world and touching ground that I felt was unmistakable in her story,” he says.

Inclusivity matters in the story of “Death of Nintendo,” so the creators made an effort to develop an equally significant female protagonist, Mimaw, as the first versions of the story focused on the boys. “This feeling of inequality was essential to me. In fact, this time period had a lot of reckoning with the ‘boys club’ mentality, just before our small suburban mindsets were forced to open up to a much bigger world,” Martin explains. One of the most interesting points of the film is when Mimaw “realizes she must become her own person and no longer be one of the boys.”

Read more: See you after school: Four stories inside the school service

“Death of Nintendo” is set to premiere at Berlinale 2020, one of the most prestigious film festivals in the world. It sits under the Generation Kplus category, which features “state-of-the-art international cinema” for young audiences. The fest starts Feb. 20, and will be screened on Feb. 22 at Urania Theater, Feb. 23 at Cubix 8 Theater, and Feb. 26 at Zoo Palast 2 Theater.

In this teaser, we’re given a hazy view of the past. Family computers, poolside gatherings and beaded braids already set the tone of this nostalgic pop culture-infused movie. As much as we’re all thrilled to see screening dates in local cinemas, we’ll make do with rooting for its success beyond our shores for now.

You can donate to “Death of Nintendo’s” production here.

There are ghosts all around us, don’t you know? Those souls that haunt...

Remember when we were all scared to do private stuff in front of...