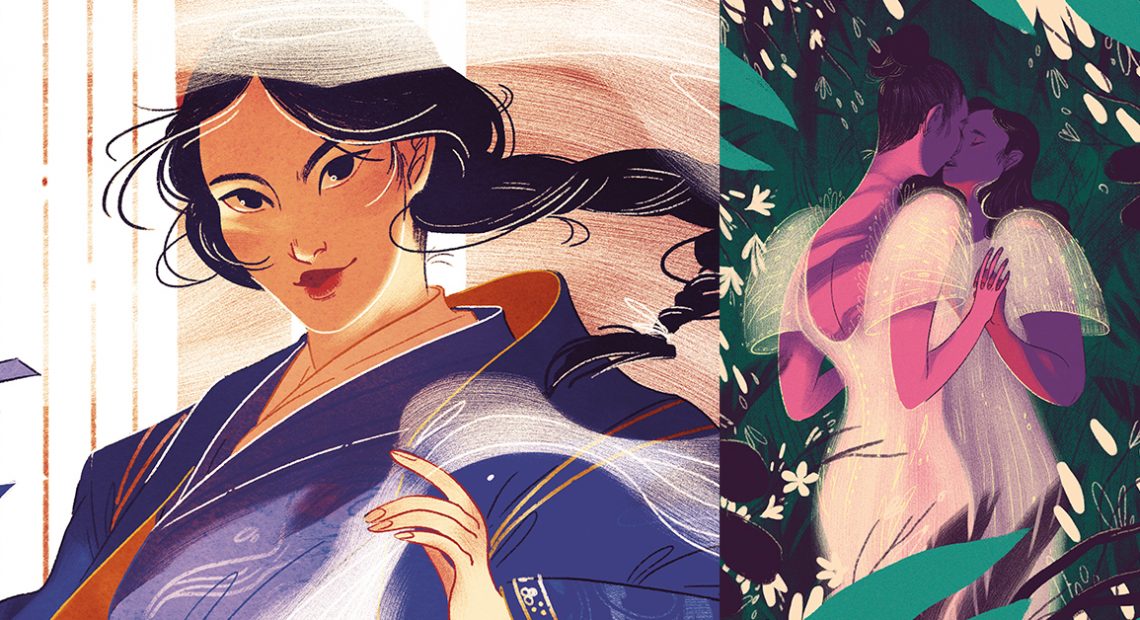 There are ghosts all around us, don’t you know? Those souls that haunt jungled hills, the far corners of a graveyard, may very well show up under a blinking streetlamp in your town. They can follow you right into your home. So cover mirrors if you’d like, avert your eyes from windows blackened in the dark. Jump through smoke before you leave the places of the dead, and nail dried palm crosses to the door. They’ll come for you all the same.

So goes the introduction of illustrator Alexa Sharpe for Espiritu: Visayan Ghost Stories, her online series of short fiction and art. The Los Angeles-based artist is recognized on the internet for her affiliation with horror and Gothic literature and her elegantly terrifying art style rooted in the use of lush backdrops and dark, shadowy visuals, usually accompanying stories either original (Dressed for Death, a series recounting tales of murders and tragedies) or adapted (for her thesis, Alexa illustrated Angela Carter’s The Bloody Chamber anthology). Growing up on Gothic classics such as The Strange Case of Dr. Jekyll and Mr. Hyde and The Scarlet Letter, Alexa also enjoyed Japanese work from Junji Ito and CLAMP, citing manga as her biggest pop culture influence. 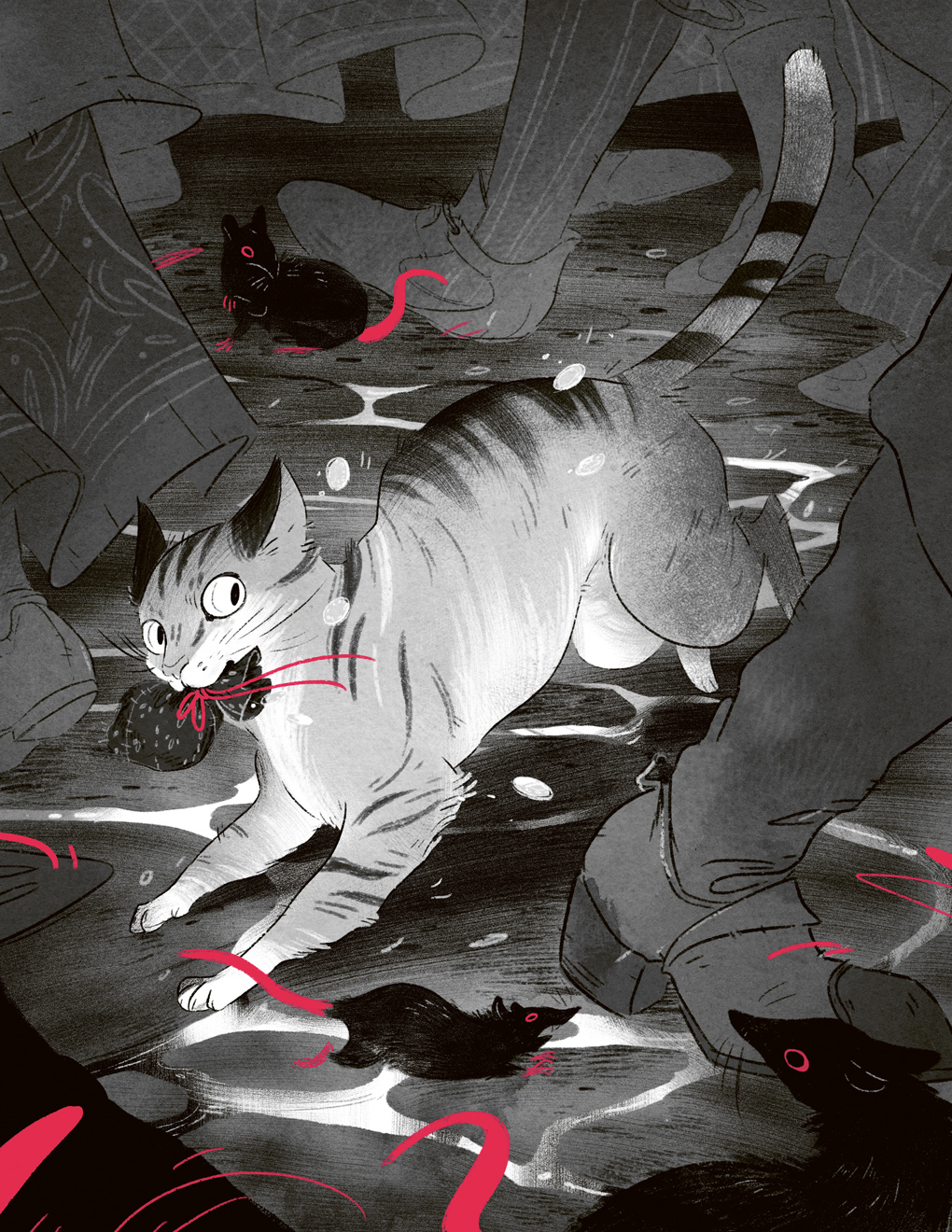 “I’ve always been fascinated with the idea of beautiful art working together with great stories, even before I really knew what design was. In fact, I still have shelves crammed full of my favorite childhood picture books! Early on, I decided I would do just that: I wanted to tell stories with art,” she says.

All the same, being half-Filipino, Alexa mentions she owes much to her heritage and upbringing. Filipinos are known for their belief in the supernatural and Alexa’s family was no exception. Raised in a closely knit neighborhood, she fondly remembers reading an entire box of books of local myths and legends from her maternal aunt. 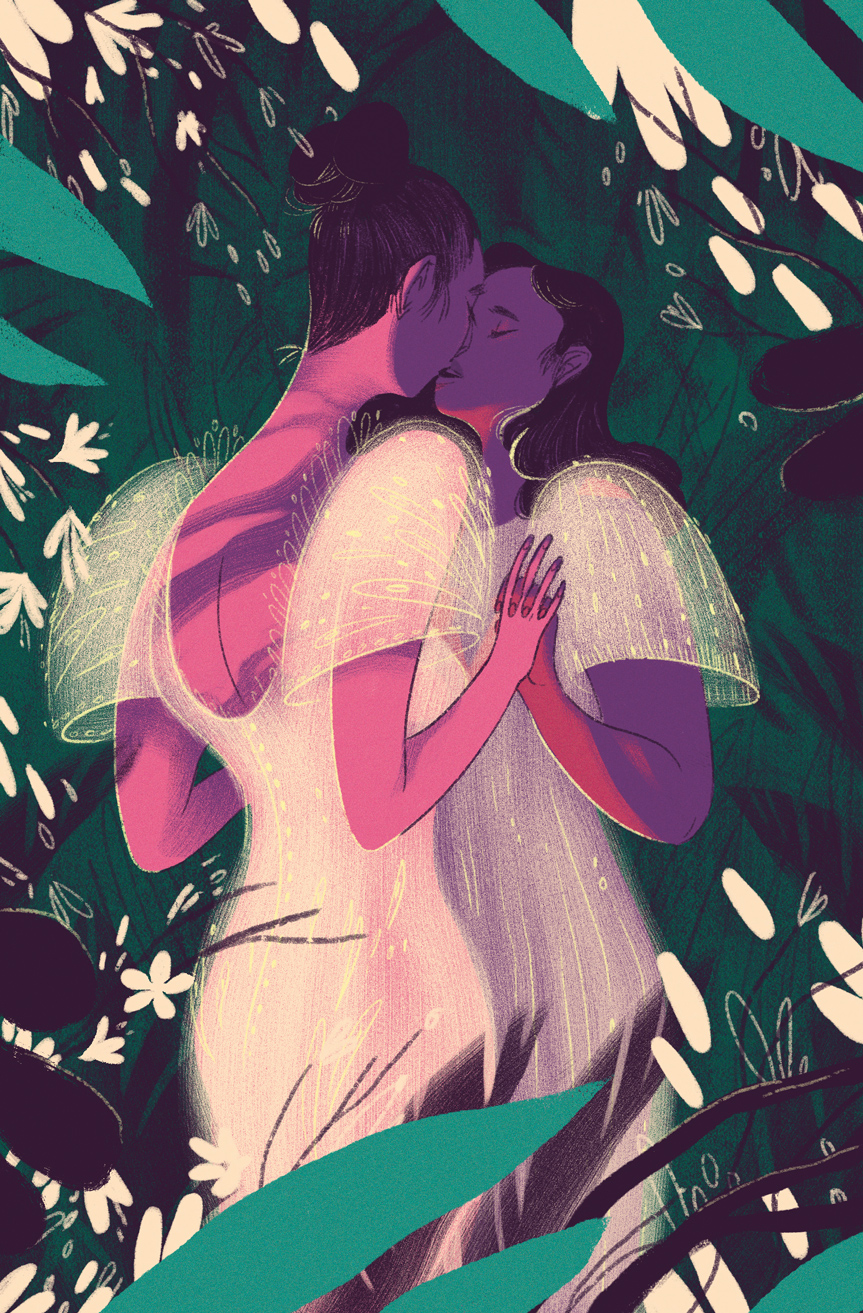 “I was safe from these things not because they didn’t exist, but because they were an ocean away—and even still, it was best to be cautious when out after dark.”

“I think what really stuck with me, even if these stories of both spirits and monsters were good fun, was the level of belief my relatives held and passed on to us. I was safe from these things not because they didn’t exist, but because they were an ocean away—and even still, it was best to be cautious when out after dark,” Alexa recounts, “When I was a bit older, once we started regularly returning to Cebu, my ties to my heritage as well as these superstitions really crystallized. It has been and always will be very matter-of-fact to me: we each have a healthy superstition for the unknown.” 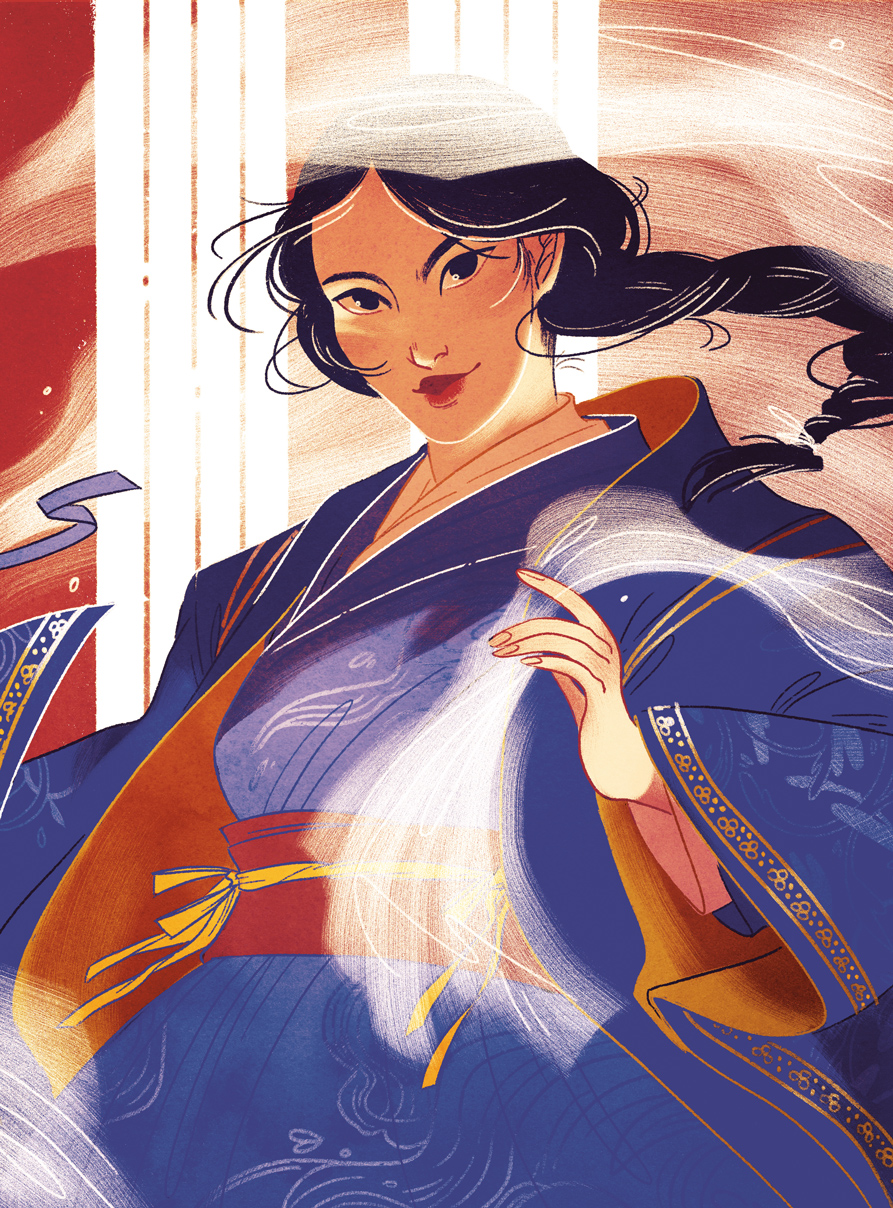 What makes Alexa’s work so alluring, other than the fact that she dabbles in writing fiction that accompanies her illustrations, is her deep passion and love for true horror—both of which show in her art. Her llustrations heavily dwell within the realm of contemporary Gothic art, with darkly dramatic landscapes and portraits depicting scenes such as an unfortunate man being devoured by a pack of wolves, or the Brothers Grimm’s Death confronting his cheating godson.

These aren’t pieces whose sole objective is to scare. Her art often treads the borders of elegance, decadence, terror, and fright.

“Good horror allows you to draw your own conclusions from a snapshot of prose or a single image, delighted and frightened by what you see and what you think it means.”

“The yawning dark of a horror story presents a world of uncertainty, and every single outcome is a fright: we’d almost prefer the simple answer of a robber in flesh and blood, as opposed to the unknowable intentions of shadows and phantoms. Good horror allows you to draw your own conclusions from a snapshot of prose or a single image, delighted and frightened by what you see and what you think it means,” says Alexa, “It’s definitely the minutiae that draws me to creating horror above all else. All the details must work together to create the right mood. It’s like solving a visual puzzle, deciding how much you want to reveal, and how much you want to leave for your audience to guess. In that way, I love appealing to our narrative of curiosity—all of us have some interest in horror because all of us are simply naturally curious.” 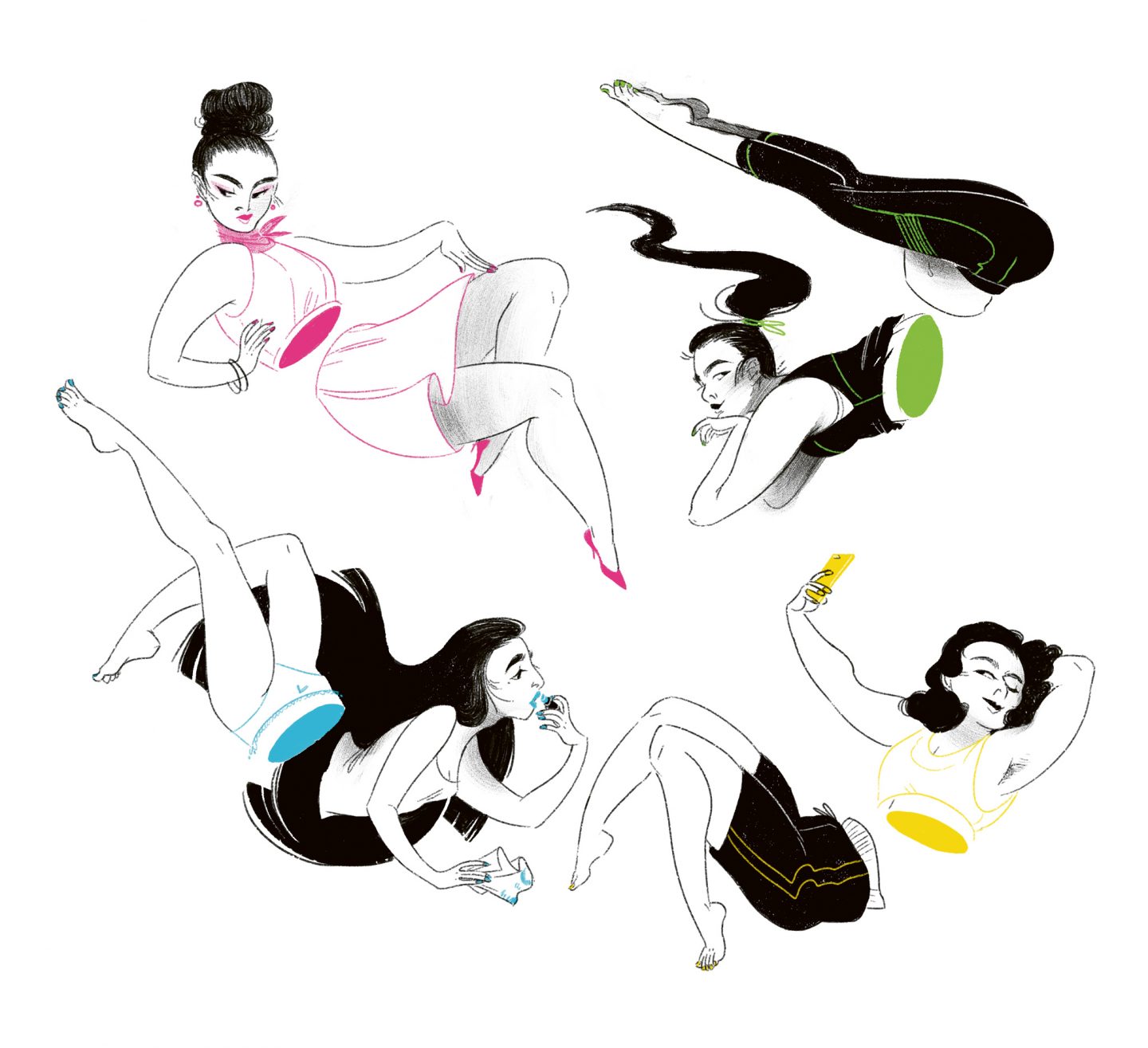 Alexa also finds herself frequently illustrating the creatures she familiarized herself with while growing up, admitting she still enjoys drawing lots of manananggal characters to this day, be they her own modern interpretation or the winged monster from local folklore. Another popular piece of hers, Ang Panaad, is a portrait of two women in Filipiniana attire, sharing a kiss while hidden in the woods. But Alexa’s most ambitious work would be Espiritu: Visayan Ghost Stories, her original art and fiction series drawn from real accounts of her family and friends of friends. There is a scarcity of accurate representation of Filipino horror and fantasy in the West, and Alexa’s desire is to fill that gap.

Currently, Alexa has been contributing to numerous zines and is preparing for the launch of her first self-published illustrated collection of her own ghost stories, to begin her promising future in books. Her art is a reminder that once in a while, a good scare is actually quite healthy. As mentioned in the introduction of her Visayan anthology, ghosts, indeed, are all around us. All we need to do is look.

SHAREI don’t have the numbers, but I think the most-Instagrammed photo from this...