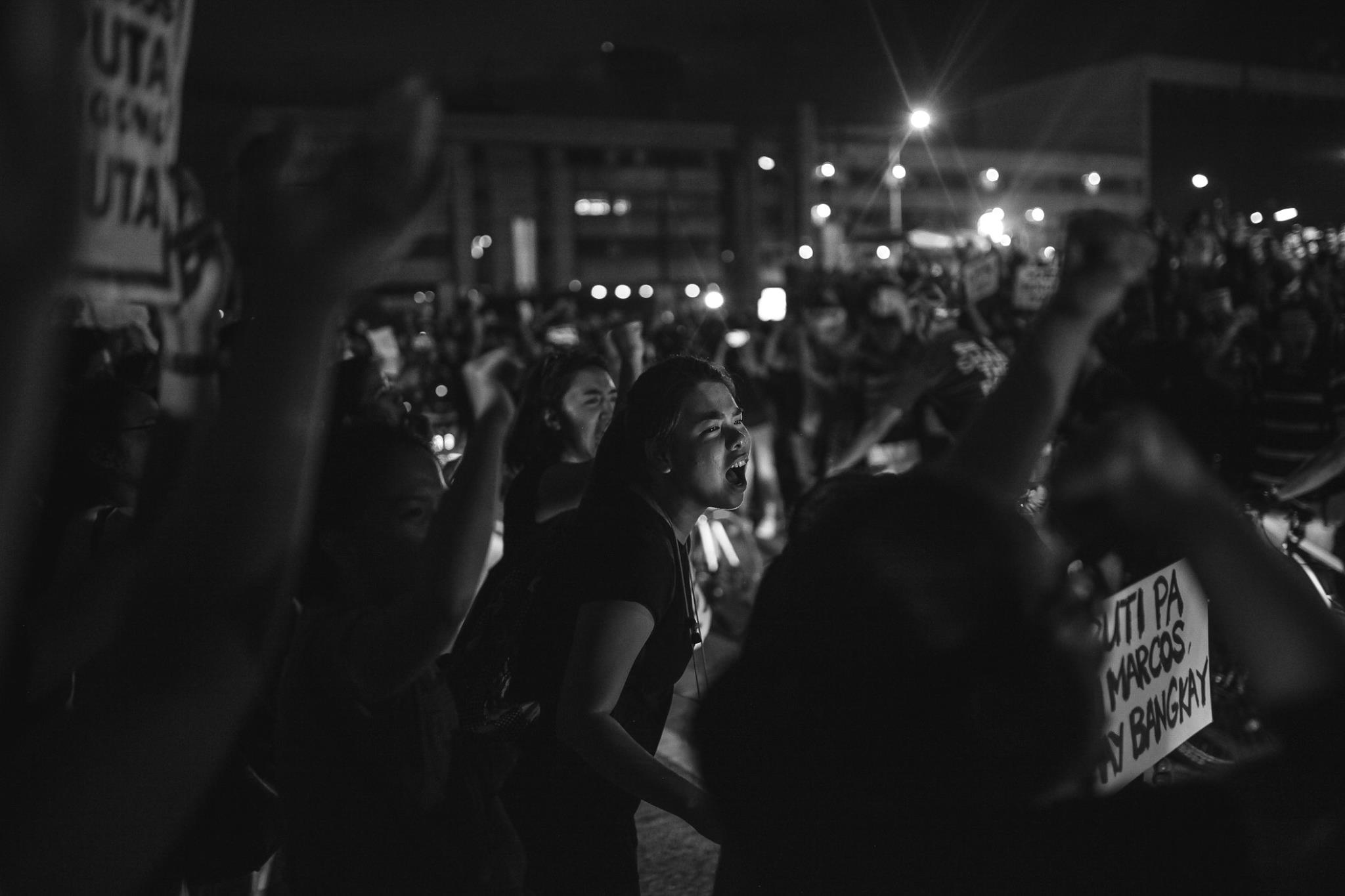 It’s widely agreed on by both the November 18 protesters, as well as their disgusting haters on social media, that the youth was pretty much out in full force in those rallies last Friday. If it wasn’t already clear that the future of this country and society rests on the shoulders of young people, that they’ve got just as much potential to shape what comes next as those with the actual power right now, Friday was a preview of all that.

We rounded up some of their stories so we can preserve some of the history that was made that night. Sure, the internet is forever and social media will always keep your receipts, but we just wanted to do our part in recognizing everyone who came through, whether they were in Katipunan, the Ayala Triangle, or the People Power Monument.

“I joined the activities at the Ayala Triangle/Philippine Stock Exchange area. To put it into perspective, there was a very calm, but focused anger emanating from those present. It wasn’t an unbridled fury. Many were coming from work, some were just getting off work, or on their way to the big gathering at the People Power Monument and stopped by our little side of the Stock Exchange, majority of whom were in their early-to-mid 20s.

You could see the working crowd coming through to participate, to shout, to encourage drivers to honk their horns for justice. There was a sense of community that grew with the crowd as it got bigger. You’d run into a friend from high school who came down, your sister’s classmates, your college friends… It was as though we knew that this was a small fragment of the demonstration, but one that mattered. Makati has been a safe place to protest, with no riot police in place, no tear gas or intimidation factor present. They did however speak to protesters, photograph some of us with their signs, myself included. A large chunk moved to EDSA at around 7 (second batch if I’m not mistaken), and when that went down, those who were going back to work did.

Felt as though many were there to participate in a safe place, conveniently located to their area of work. Anger was real, but when you got down to it, they knew there were bigger fights coming.” —Raf Camus, marketing professional, Makati resident

“During class, I ranted to my students about the Libingan ng mga Bayani issue. Hours later, I was pleasantly surprised when I met a bunch of my students at the People Power Monument rally.” —Socrates de los Reyes, Filipino instructor, Ateneo de Manila High School

“My parents marched along EDSA in 1986. 30 years later, I found myself alongside other sons and daughters taking a stand. When I got there shortly after 9, the mix of people from Katipunan and Makati were already several hours into protesting. Visibly exhausted, but just as angry. Who wouldn’t be? Betrayal doesn’t typically sit well with a nation.
This was my first rally, and so I was nervous walking down White Plains Ave. Do I just join in on the chants right away, or do I stand around and listen first? The energy was infectious, and combined with everyone being generally welcoming, I found myself shouting louder and louder with my left hand raised in a fist. Some police vehicles were being booed; not sure why. We were asking passing cars to honk their horns in support, but I honestly couldn’t tell if some of those horns were blaring cause of us slightly blocking the right turn on to EDSA. Police in riot gear arrived close to midnight, blocking protesters from spilling out on to the road.

Folks were also kind enough to hand out boxes of free water and crackers, but some of the boxes lying around were ransacked by street children. A few cars would actually stop by the protesters to have anti-Marcos signs stuck on their cars. Those inside these cars would also raise their fists out the window in support. Experiencing just a fraction of what happened 30 years before honestly woke me up. We’re not the ‘lazy, entitled’ generation we’re constantly made out to be.” —Lorenzo Magnaye, radio DJ

“I felt really shocked when I heard of it, tapos napalitan ng galit agad nung nalaman kong tuloy talaga. I felt that as Filipino students, we really had to do something not only to express our opposition to the decision, but to engage our fellow students in discourse towards other kinds of fruitful action in response to this issue.” —Koko Quilatan, Sanggunian ng mga Paaralang Loyola ng Ateneo de Manila

“The crowd started to gather inside Ateneo at around 11:30. By noon, they arrived at Gate 2.5 and began a noise barrage. I felt like I was witnessing history renewing itself. The cars and trucks and other vehicles stuck in traffic started honking in tune to our chants. The bridge I was standing on shook under my feet. But I didn’t feel afraid or anything. I felt like crying because I was so moved by the people in my generation. And I felt, above anything else, this wrath that I felt would engulf me for the rest of my life. I don’t know how to explain it really, but it was like the voices of the people silenced during Martial Law gathered in my gut. And when I yelled and cheered and chanted with the crowd, I hoped I was giving these voices a chance to be heard again.” —Belle O. Mapa, student

“It was as if I couldn’t feel tired—like there was something more urgent that needed to take precedence over any exhaustion that could manifest in my body. Walking from Katipunan to the People Power Monument while shouting along with friends and strangers felt empowering, like there was a coming together that was happening in demanding for justice together with other protesters.” —Angela Natividad, student

“I was on my way home from an outside clinical rotation when our student council started posting announcements, inviting the whole school to join the rally in EDSA. I felt compelled to go, not just because I live near the site of the rally, but because I felt like there was a need for me to express my indignation about what happened earlier that day. Also, my parents joined the People Power protests in the past, and I believed that joining the rally was something they’d approve of.

On the way there, I received messages telling me to not go anymore, or tips about police being deployed with tear gas. I almost turned back with fear, because this was the first rally I would be attending (yes, despite studying in UP for four years!). However, my anger was greater than my fear that night. I ended up going to what was one of the most surprising experiences in my life.

The rally was filled with lots of people my age, fighting for things that we never experienced and have only read about in our history books. I felt safe being there, as I saw a lot of my schoolmates and many older ones as well. My schoolmates and I recited the chants and encouraged passersby to “Make busina for hustisya.” Lots of cars honked, and some people in these vehicles have given us snacks.

My favorite part of that night was when a little girl spontaneously started chanting the ‘Marcos, diktador!’ chant and everyone around responded eagerly. The little girl’s mother hugged her afterwards. That reassured me that though people my age have not experienced Martial Law, we are aware of what has happened and that we will continue the fight of those who lived through those dark days.” —Vicky Chan, junior medical intern

There are more rallies happening on Friday (a Black Friday movement at the Rizal Park, Luneta) and on Bonifacio Day next week (at the Libingan ng mga Bayani itself). If you’ve got a bone to pick with the government, we hope these relatively few stories have inspired you to help do something about it—and we hope everyone stays safe out there.
Photo by Geloy Concepcion

She is set to play Alysia Yeoh, Batgirl’s best friend-slash-roommate