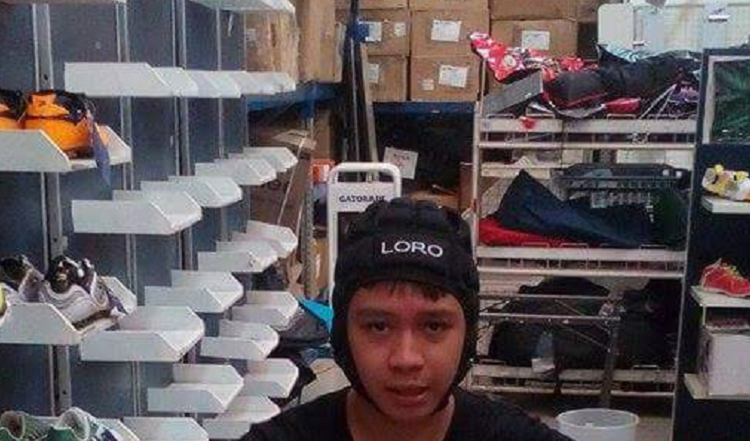 Despite what his melancholic “guitar-driven-jazz-bedroom-dream-pop” songs may suggest, Mellow Fellow a.k.a. 21-year-old Polo Reyes is not a sad boy. In fact, he is just like any other “fellow” out there; he enjoys playing basketball and hitting the gym with his friends and plays guitar in another band called The Benchwarmers. His moniker itself, came to him while he was rhyming in the shower, pondering what he’d call his solo project that took full form when he uploaded a song called “alone” on SoundCloud three years ago.

Influenced by older bands from the ‘60s and ‘70s, he describes himself as an “unemployed boy who writes semi-to-very-sad songs under the moniker ‘Mellow Fellow,’ but nothing more. To him, Mellow Fellow is just an outlet for “some sad things that have happened” in his life, so he’s well aware that his songs make him seem like a “sad and lethargic guy,” despite being the “jolly guy” that he is.

So far he’s released three albums: Mellow Fellow (2014), 604 DIAMOND STREET (2015), and most recently Jazzy Robinson(2017)—which is a compilation some of his older songs and three unreleased demos, soon to be re-issued on cassette through Detroit-based record label Palm Tapes.

Currently sitting on a new track (possibly from his upcoming album) that he’ll be releasing next week, he gives us eight songs that he himself listens to in the morning to get out on the right side of the bed, because as he says “I think mornings are underrated. Most people I know are seriously nocturnal and won’t wake up until noon, but early mornings make me feel calm. And there’s nothing better than to start your day while listening to some great ass music, am I right?”

“Good morning. Lovely day; grass is green, sun is shining bright, the pastel colored house seems to illuminate better this time of the day. Man kisses his wife and kids goodbye as he heads to his car; off to work in a ’60s dystopian America. We find out that he is driving with no direction at all as the camera zooms out, featuring obliterated buildings and mutated human beings.”

“I discovered this song about seven years ago through this flash game called Seven Deadly Sins.”

“Pretty sure any talent of mine would wither if I left this song out of the list.”

“This one is for the slower mornings that stem from a night of wine, good conversation, and romance. Or a song that could help you get through the day after drinking five bottles of gin and having a regretful hookup the night before.”

Raspberries – “Go All The Way”

“I can’t help but sing this out loud and dance like an idiot in the shower.”

“This song will pump you up in the same way Debbie Harry would get pumped up from all that coke back in the ’80s. Speaking of Debbie Harry, she stars in a film you guys should totally watch, it’s called Six Ways to Sunday. A slightly messed up film, but I’m pretty sure the people reading this article would be into that kinda stuff.”

“Okay, this is currently my favorite song of 2017 and ‘Peek A Boo’ just negates all of the songs in this list to be honest. I bump this banger up every morning and I’m pretty sure that my family is starting to hate me because of it. (laughs) Mom, dad, sis, if you’re reading…I’m not sorry. Peek A Boo!”