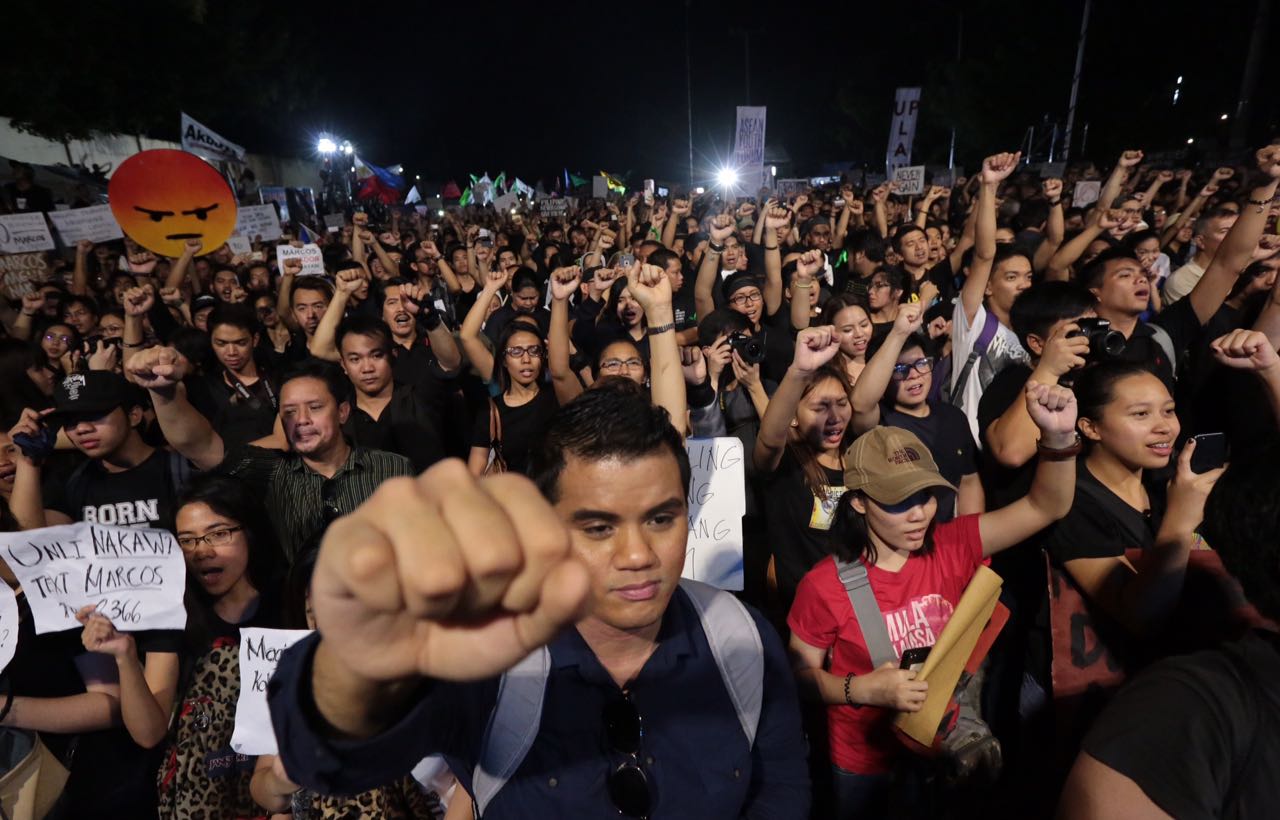 By Stan Sy. Photo by Grig C. Montegrande for the Philippine Daily Inquirer

Before my college life at the University of the Philippines Diliman began, I was told not to join the rallies. Parents, relatives, friends, upperclassmen, everyone who’d been through the UP ride had told me not to join mostly because they’d distract you from your studies. And isn’t that what you’re ultimately in college for? To study? After all, I was going to be an iskolar ng bayan, someone whose studies are literally funded by the state—and, therefore, the people.

So I went through all four years of my undergraduate life not attending a single rally. It’s not that I didn’t want to, nor that I didn’t care. I didn’t attend a rally because (1) I was never required to by a left-leaning professor, (2) I always found something more important—a class, an org meeting, a tambay session at the org’s hangout spot, or (3) I just never felt personally attached to the cause. At the end of the day, if I was going to stand in the heat or march and be all sweaty and grimy all day, it had better be for a cause I strongly believed in. I never found that cause.

When we were all shocked by that surprise burial on November 18, my online echo chamber (read: social media feed) was filled with people who expressed the outrage I had seeping through my insides. They hauled their asses to the People Power Monument as soon as work ended, cancelling overtime, inuman sessions, or even Grindr dates in the process. I didn’t join them because there were overdue deadlines I was trying to meet.

Seeing the posts of my friends who were there on the 18th, I felt left out. FOMO is real, after all. While I was clicking “Like,” “Love,” “Sad,” and “Angry” at their various posts on Facebook, my friends and peers were actually there in the streets, letting their voices be heard. To borrow a phrase that my best friend from college wrote, a line was drawn in the sand and on that day, we divided who among us stood on the right side of history.

By not being at the Monument that night, I felt that I wasn’t doing my part. But in seeing my friends do theirs, I felt empowered. In my heart, I knew that I had to be there at the next one. I had to stand, scream, and raise my fist because it was time to show that I am angry about this. I had found my cause.

[pull_quote]I was nervous about what my Uber driver’s political stance would have been, if I was going to get a lecture from an elder who felt I was just going to waste my time. Instead, he put me at ease by telling me that if he could be at the protest himself, he would be. He told me that his dad was once among the thousands who rallied at EDSA in 1986, representing his family in voicing their displeasure at the regime.[/pull_quote]

Working in media has made me forget the concept of holidays altogether, so I had to wait until my radio show actually ended until I could make my way to the monument. I hailed an Uber, and upon getting in, my driver asked if I was joining the protest. I told him that I was, and that I was going to join my friends there. I was nervous about what my Uber driver’s political stance would have been, if I was going to get a lecture from an elder who felt I was just going to waste my time.

Instead, he put me at ease by telling me that if he could be at the protest himself, he would be. He told me that his dad was once among the thousands who rallied at EDSA in 1986, representing his family in voicing their displeasure at the regime. My driver was in college at the time, and even then, he felt strongly against Martial Law and the evils that it brought. That’s why he himself felt that it was right for the youth—people like me and my friends, people like us—to be there tonight.

As soon as I got to the Monument, the first thing I did was call up my friends from college, but since none of them were picking up, I decided to just walk around wondering who I’d see. I wore a plain black shirt and a snapback, hoping to be slightly incognito because you never know who’s watching. And then I noticed an older dude with long, white hair smack in the middle of a sea of millennials fervently raising his fist as the people on stage led everyone in anti-Marcos chants. It was Pen Medina.

I stood next to him, mostly so if my friends would look for him, I could say that they could find me right next to Pen Medina. How hard would he be to miss in a place like that?

After a few minutes, I started walking around the stretch of White Plains Avenue, saying hi to friends who recognized me. I accompanied each handshake with a greeting of, “It’s good to see you here,” the most heartfelt and genuine thing I could say to someone with whom I found empathy and solidarity at a time like this. It was surprising seeing acquaintances, friends, batchmates—particularly Xaverians. Seeing guys from my school sharing in that experience was one of the few times I was actually proud to be of my school. It showed how willing our educators to teach us to stand on the right side of history.

While I moved from group to group, my friends would ask me who I was with. I’d reply, “Just me.” And yet I never felt alone. Walking around the protest area, watching people participate in the chants, raising their signs, painting new ones, I never felt alone. Seeing people I haven’t spoken to in a long time, or engaging in a long conversation with people I’d never met—with our outrage at this whole charade being our only common denominator, I never felt alone.

As people passed around bottles of water, to fellow protesters and even to the policemen on duty, I imagined it being a modern-day incarnation of the Multiplication of the Loaves and Fish. You didn’t have to worry about anything while you were there. There was always somebody that had your back. As one friend told me when I asked what I was supposed to bring, just bring an ID and love of country. I stuffed my pockets with two packs of crackers anyway.

Realizing that it was getting late, my friend Mark (not his real name) offered to give me a ride back to my workplace, where I’d parked my car. He admitted that he actually voted for Duterte, but that he strongly opposed the Marcos Burial at the Libingan ng mga Bayani. I asked him if in voting for Duterte, he could live with the cussing, the bigotry, and this culture of violence. He said that he could live with it, but not with the Marcos Burial.

[pull_quote]But I realized that while the amorphous blob is real and that there are people who are actually part of it, not all Duterte voters/supporters are. There are those who were willing to draw the line somewhere, and for some of these folks, that line was the Marcos burial.[/pull_quote]

I used to think that everybody who voted for Duterte was part of this amorphous blob of puppets, that all of them were so blinded by this idea of him as the non-traditional politician who would rock the status quo. I thought that all 16 million of them were so willing to drink the Kool-Aid that they unwittingly signed off on all of this brouhaha on behalf of the rest of us. I hated them for it and called them stupid idiots, and put them on my shit list.

But I realized that while the amorphous blob is real and that there are people who are actually part of it, not all Duterte voters/supporters are. There are those who were willing to draw the line somewhere, and for some of these folks, that line was the Marcos burial.

While I initially wanted to blame all of them and even go so far as to shame anyone who admits guilt over voting for Duterte, I’ve come around and realized that we need these people in the so-called middle ground more than ever. We need to welcome them and include them instead of further alienating them. That’s how we get more people to speak up and acknowledge just how shitty this situation has become.

Mark asked me why I went to the protest alone that night. I then told him about how my girlfriend asked me what the endgame of this protest was and if that act alone was going to bring about the type of change I wanted. I told him that it probably won’t on its own, but that I hoped that by being there, we could all empower more people—people like me, who would no longer be content taking on trolls online.

Maybe by being there, we could inspire more people to come to terms with their anger, and to express it by taking to the streets together. By being part of that event in history, we could still steer this country away from what’s becoming the darkest timeline.

Maybe, just maybe, by being there, I could help someone else find that cause they believe in and realize why they should be out there fighting for it.

SHAREWhat’s with Scout and their annual parties? There are a lot of reasons...