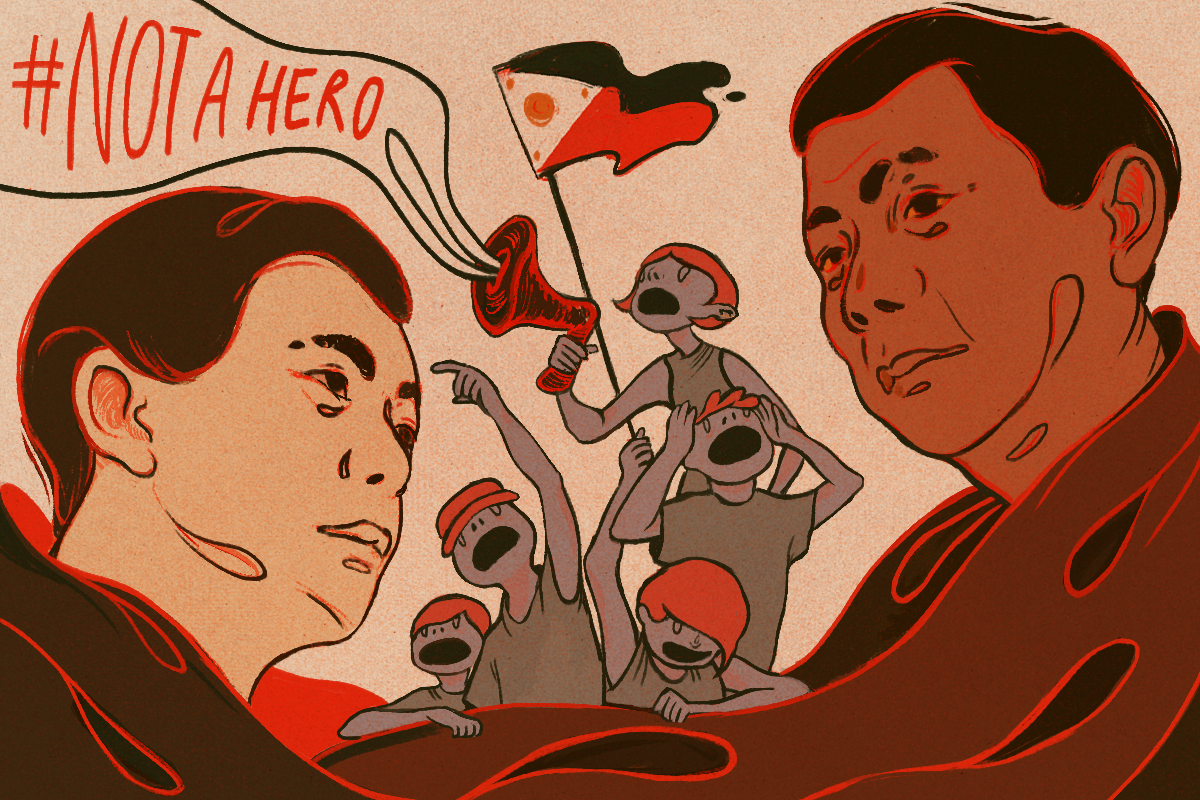 What else does Duterte need to bring this elusive “change” he prophesies? He has a supermajority in Congress, a Senate in disarray, executive power unbound by morals, billions of taxpayers’ pesos for the President to spend unaccountably, and a Supreme Court eager to wash its hands on a contentious political issue. Now, Ferdinand Marcos is buried in the Libingan ng Mga Bayani. As fate would have it, Duterte now turns to the last voice of political opposition, as rumors ring of replacing Vice President Robredo with Senator Marcos after a recount of the last elections in key provinces.

It is not a difficult rumor to believe. We Filipinos are too used to impunity.

On and on, the worker bees drone with their divisive polemics: “Are you pro-Marcos?” “Are you pro-Aquino?” “Are you pro-Duterte?” Right now, the only “pro” we ought to be is protest. Social media has spoiled politics. The right to free speech is now a Get-Out-Of-Logic-Free card. Popular support has been hijacked by clickfarms and trolls, who stir the pot with lies and false reasoning. The bandwagon is crashing, and we are being distracted from this wretched truth.

But the time for great, unwieldy debates is over. The time for settling disputes online, the stale satisfaction with political correctness, the abject apathy that cushions our collective disgust at the gall of taxpayers’ money sponsoring a state burial for a dictator. Now is the time for action—for intelligent and compassionate action, informed by grief, challenged by social inequality, spurred by a collective need for democratic reform.

Reform, because “change” is an unresponsive and emotional word that promises too much and delivers too little. The task today is not merely to save democracy; it is also to reform it. Social media still has a role, but it should now be used to network and organize, instead of being some surrogate reality. Discourse must be had, debates must be made, but now its goal should be consensus building—not the entangled sophistry of populist hacks, eager in their exceptional recital of fallacies.

[pull_quote]Right now, the only “pro” we ought to be is protest. Social media has spoiled politics. The right to free speech is now a Get-Out-Of-Logic-Free card. Popular support has been hijacked by clickfarms and trolls, who stir the pot with lies and false reasoning. The bandwagon is crashing, and we are being distracted from this wretched truth.[/pull_quote]

Protests will be done. But in a politics mired by pettiness and lassitude, the government benefits as conqueror and divider. It should not, cannot be this way – politics is a coming together, and democracy guarantees our freedom to petition our government for redress and grievances. The Marcos burial has shown the potential for a great start; when news broke of the clandestine burial, pockets of resistance sprung around universities all over the Metro, converging in the People Power Monument for a night of poetic justice, and tragic irony.

Thirty years on, and we’re still protesting the same things.

In the short term, we must protest the Marcos burial to raise awareness, until awareness evolves to dissent, until dissent evolves into action. Our mid-term goal should be civil engagement, crossing the aisle and formulating questions that we can ask from the other side of the spectrum. All these efforts eventually boil down to the long-term goal: transparency and accountability from the Duterte government. No secrets, no karaoke sessions, no unaccounted Intelligence Funds, no sorceries from online spinners or distracting Congressional hearings. The task is to hold Duterte accountable, give credit where it is due, but also to expose him for his backroom deals and coziness with the Marcos family. The objective is to keep asking the question: “whose president are you? The people, or one family?”

There is no reason to lose hope. Susan Griffin, a feminist writer from the ‘70s, once wrote: “I’ve seen enough change in my lifetime to know that despair is not only self-defeating, it is unrealistic.” Though the powers-that-be would have us believe that it holds all the cards, politics is more like a game of chess. The struggle today must resist knee-jerk reactionism. Space must be made for common ground, room must be given for us to come together, and it is high time for the echo chambers of social media politics to crack open and give way to real and gritty political work.

Despite the crap millennials get for being carefree and narcissistic, the kids turned out to be all right. Ours is a generation eager to confront the problems left behind by our elders, and although there are now forces that would benefit from our dissociation and discouragement, we are now more than ever elated to pick up where the best of our countrymen left off: fixing this country, fixing our home.

Calling all ’90s kids: Your old Happy Meal toys are making a comeback

SHAREUNKNWN.Fiesta, the sustainable 14-hour celebration of “music, art, food and beyond” hosted by...

SHARESometimes, even though we really, really love our current musical tastes and the...