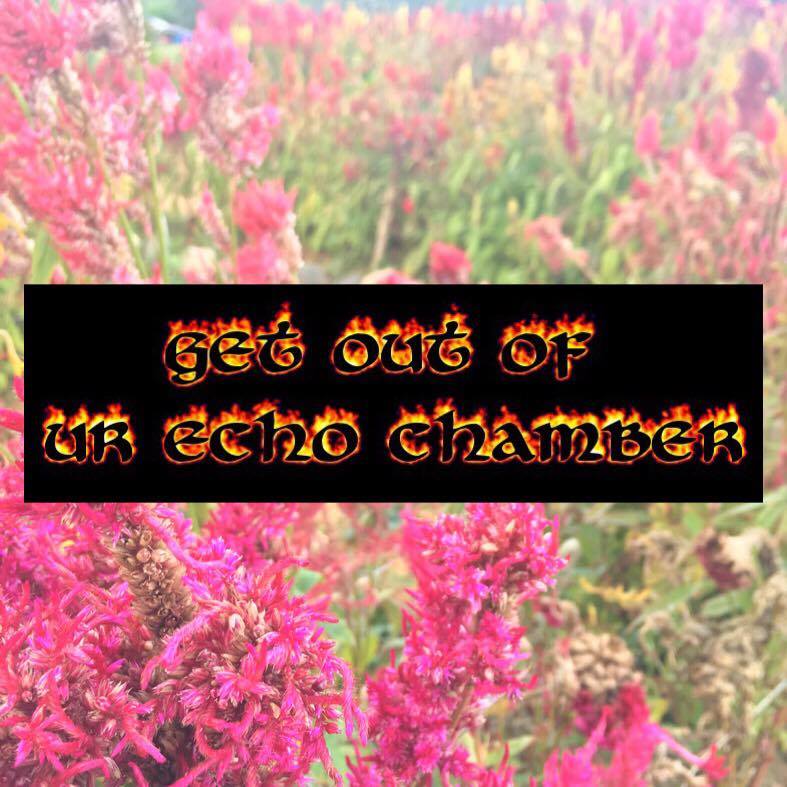 How many “woke” Twitter accounts does it take to change a light bulb? The answer is none—we’re all busy attacking said light bulb on Twitter.

Fighting injustice one tweet at a time is a perfectly normal response to how incredibly messed up our society is these days. We can’t help but just vent our frustrations and rant online, and this all seems pretty easy when we’ve surrounded ourselves with like-minded individuals and set a facade for how we want to be perceived online. The ideas and opinions we create on the internet bounce around the walls of our echo chambers and are reinforced by our circles so often that we tend to think this idea must be right, everyone must think this way.

But that way of thinking is actually toxic, and is like expecting someone outside of an inside joke to understand the joke.

Towards the end of The Year of Realizing Things, social media has become more “woke” or politically conscious, and we’ve all become more sensitive about the things we say online and how we act, to the extent where we call out people for having badly formed opinions. We’ve grown so comfortable within our online circles that we assume everyone we interact with is on the same level of understanding as us. One badly formed opinion and we come at this misinformed person with screenshots and turn the misinformed into a meme that our followers could retweet and like. We enjoy shaming people for their mistakes just so we can get validation from our followers. Instant ego-boost!

“We’ve grown so comfortable within our online circles that we assume everyone we interact with is on the same level of understanding as us… We enjoy shaming people for their mistakes just so we can get validation from our followers.”

To some people on Twitter, getting blocked by someone they disagree with is like being crowned “Most Woke”—as if getting blocked means winning an argument when it actually changes nothing at all. The blocked had the chance to educate and calmly talk to the blocker, but I guess harassing them for the world to know that the blocked is “smart” and the blocker is “bobo” is cool. To add fuel to the flame, these same people often bring up the misinformed person’s past mistakes to invalidate the person’s recent opinion, as if the person isn’t capable of change. That’s a lazy argument. If you think activism is a brand identity for your online persona, then that’s not activism at all, that’s just being selfish.

Often, we fail to see that our online “activism” is a privilege. While it is good to spread awareness and influence people, it is also elitist to assume that the people we call out online even understand what we’re fighting for. Not all Filipinos can afford the same level of education. Not all Filipinos are aware that their opinions might be harmful to society or might even further contribute to oppression.

We’re so quick to judge someone for their misinformed claim, not realizing these people are ignorant not by their own fault or choice but because they were born into a position of lesser privilege to discern our idea of right and wrong. How these people came up with their opinion took several years of growing in a society that reinforced those kinds of beliefs. They would think that the belief society has imposed on them is for the common good even when it’s actually harmful. Once confronted with these people, we’d gang up on them quicker than our internet speed allows us. But that’s too easy, and it isn’t even contributing any good to society other than being made to think that if your beliefs don’t align with the mob, you’re automatically wrong.

If you think activism is a brand identity for your online persona, then that’s not activism at all, that’s just being selfish.

When calling out people online, we need to remember that they don’t owe us anything, therefore we shouldn’t be so rude to them. Be kind! We all don’t possess the same worldview, and a lot of people aren’t capable of accessing the same information as us. These people are byproducts of the system that continually betrays us. It’s the system that we should go after–the institutions that control mass media, pop culture, public education–and not the individuals who are influenced by the problematic norms we live in.

We should always reach out to these people and educate them–further the discussion and talk about how we can overcome our own social conditioning instead of resorting to vicious ad hominem attacks. The more we drag, shade, expose or attack these people, the further we divide ourselves from each other, whereas our initial goal is to end injustice as one. Calling people out for their mistakes is fine when our intention is to educate, but to attack someone for likes and RTs is just cruel and selfish.

On the other hand, when we call public officials out for their harmful mistakes or shortcomings, we do this because it is our right, as the people they serve, to complain about the kind of service we’re getting from them and hold them accountable for their words and/or actions. These politicians live off our taxes and when they abuse the rights of the people they are supposed to serve, then they need to be called out–and more importantly, the masses need to be made aware that their own rights are being taken for granted by people of higher position. We don’t owe these public officials anything, in fact, they owe us the promises they’ve made while they were still campaigning as well as the service we pay them to do. We can lengthen our patience for as long as we can, but when abuse is apparent, we put our foot down and we fight.

When calling out people online, we need to remember that they don’t owe us anything, therefore we shouldn’t be so rude to them.

If you could @ the person, or slide into their DMs, then do it and engage in meaningful conversation instead of fighting fire with fire. Being “woke” is more than just a Twitter brand for ourselves; the word itself encourages us to wake up from our complacency and see past our privilege in order to understand how we can change society and actively make this country a better place to live in.

“I’m shocked,” said no one ever