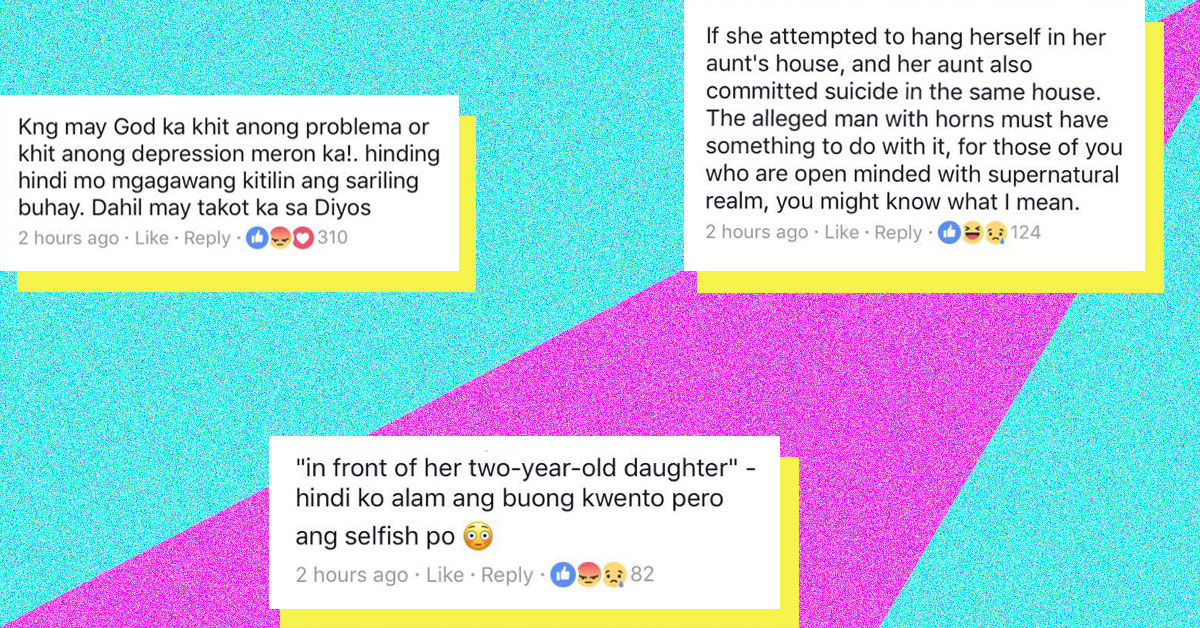 Yesterday, July 12th, the Cebu Daily News reported on the suicide of 21-year-old Kian Shannon Sophie Cañares, who live-streamed her suicide on Facebook live. You can check the report here, which includes interviews with Kian’s father and with a psychologist. The report itself was balanced, but what was disconcerting were the statements of both the father and Maryjun Delgado, a veteran psychologist in Cebu–both of whom clearly have no idea on how to react to it.

What’s more enraging are the comments on the Inquirer.NET Facebook page, which shared the story. We address the stigmas presented in the story and in the Facebook’s comment section one by one:

The dad seemed in denial of the severity of his child’s depression, or just wasn’t aware.

According to the report, Kian tried to commit suicide twice in the past. But at the same time, the father was quoted saying, “We did not see any signs that she had problems. In fact, she was laughing a day before she committed suicide.”

Cheerfulness or happiness of the person does not reflect a person’s emotional state. Just because a person is happy doesn’t mean he or she is fine. According to research, laughter is found as a way to cope with stress, and there are reports that link comedy and depression.

Suicide is not a selfish act.

“What she did was very wrong. It was not good, and is never acceptable whatever the circumstances may be. Suicide should not even be in the equation,” the psychologist said in the report.

There’s a value judgment given on the act of suicide in this quote. Yes, ideally, suicide should not be an option, but the way she said it sounds like she’s blaming the victim. As a professional, what she says has more weight and this victim-blaming helps no one, especially those who are contemplating suicide. 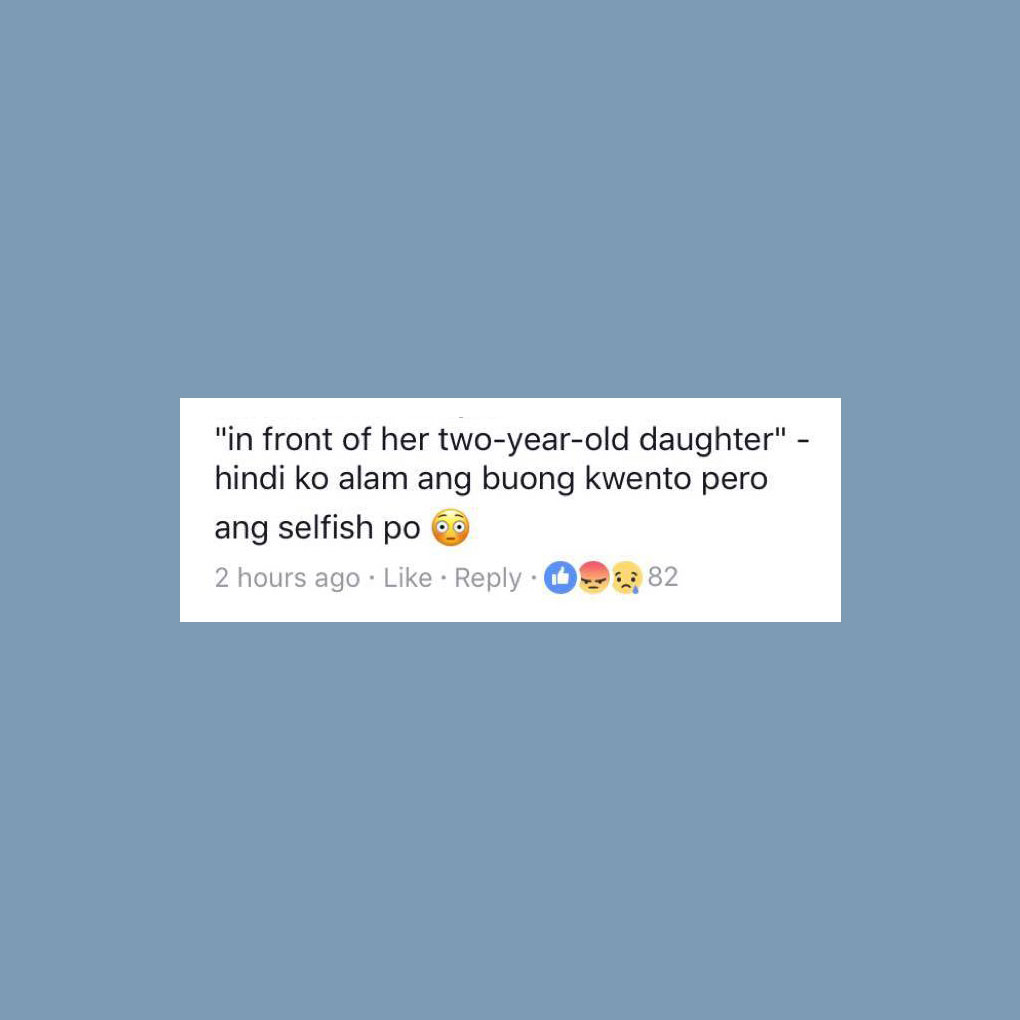 Other comments say the same thing. Out of everyone involved, the person committing suicide is most likely the first person to consider the impact of his or her actions, from the people in her immediate family to the people in her social spheres. Suicide is not selfish. What’s selfish is invalidating the feelings and reality of a suicidal person without truly understanding why she did it or knowing her whole story.

Looking at it through a Catholic/religious lens does not help 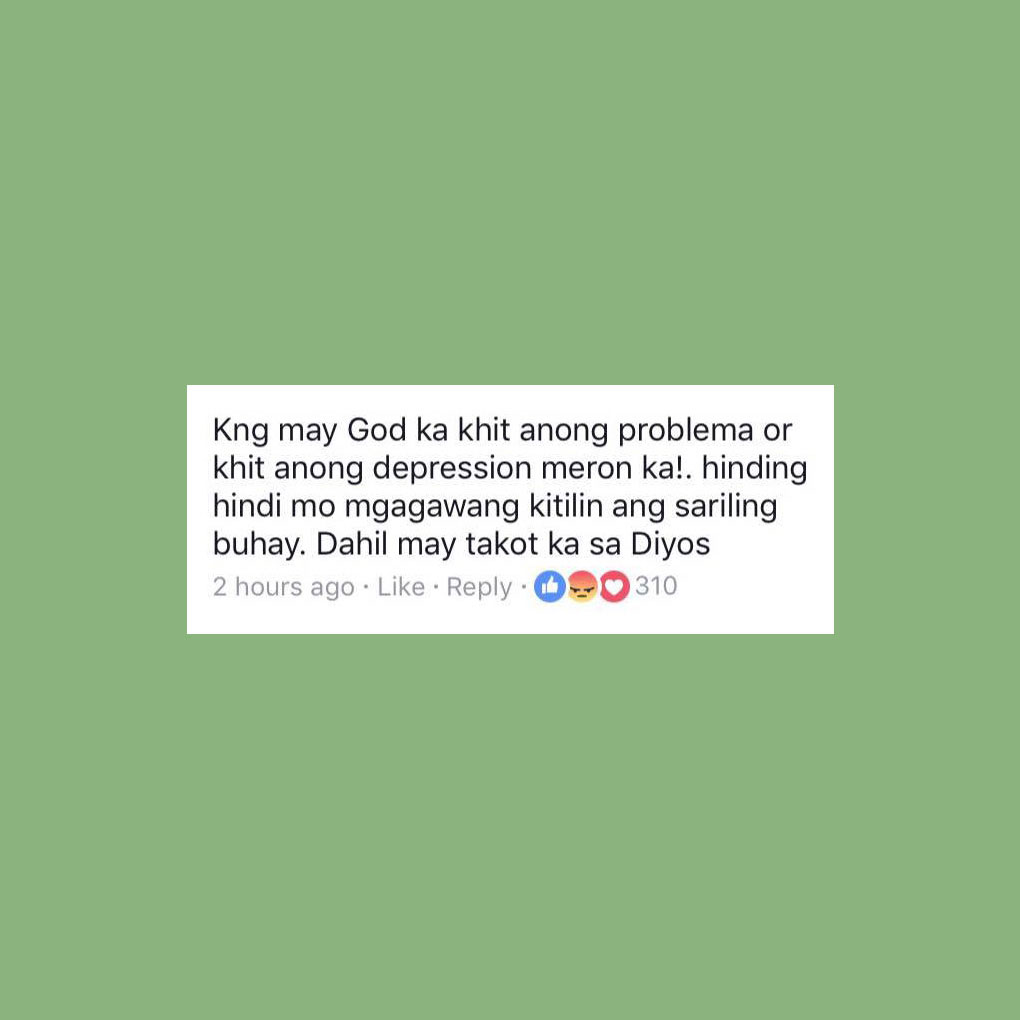 By calling suicide a sin and demonizing the act of suicide, you are passing judgment on people who have committed suicide, and that does not help anyone. No one needs to be judged during a time of need. No one needs to hear that they are going to Hell when they are seeking help.

In the same vein, resorting to prayer should not be the end when it comes to helping someone. Prayer is not a be-all, end-all act that suddenly solves problems. To leave it as simple as that ignores the complexities of mental illness and suicide,  and the fact that suicide stems from an actual illness as real as any physical illness. 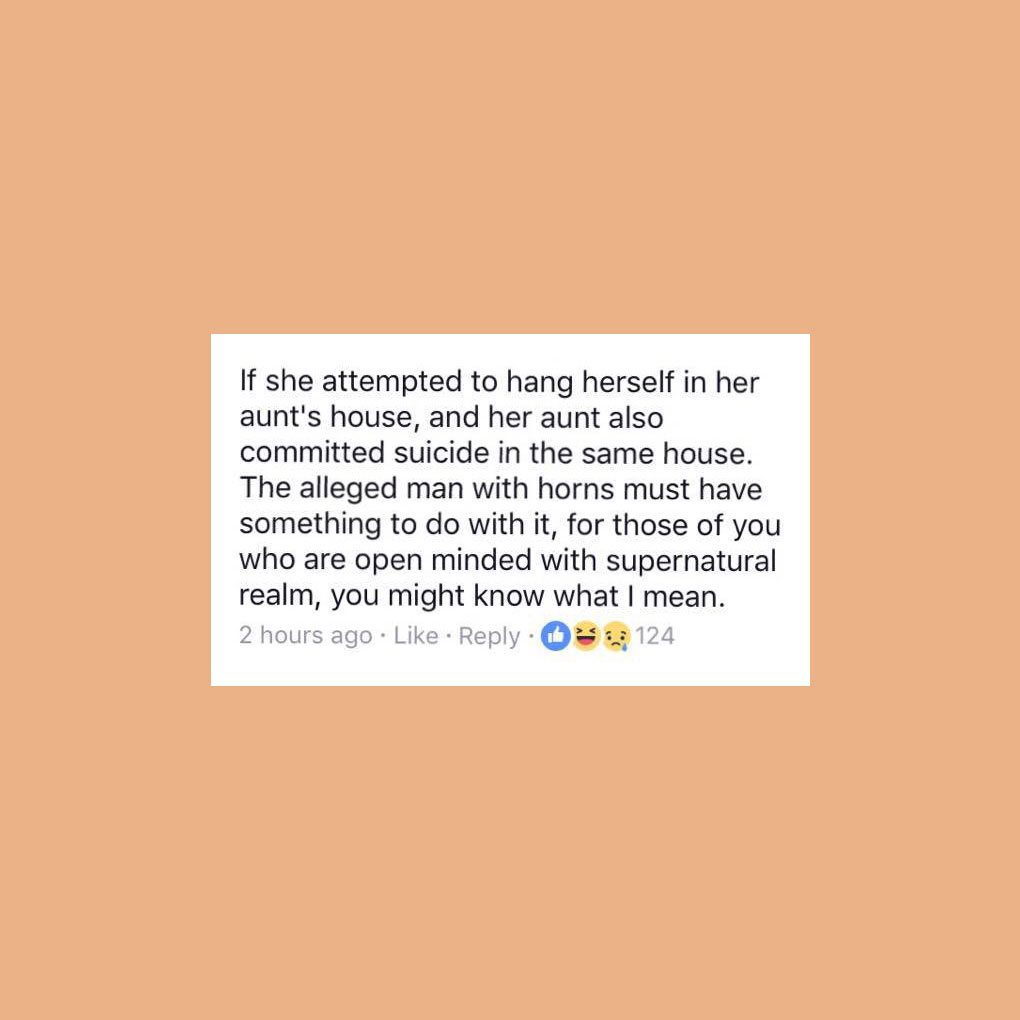 The report includes a quote from Kian’s father where she mentions a “man with horns” to him. Regardless of what that statement means, resorting to supernatural reasons for suicide is baseless and again, helps no one. By treating the issue as something beyond understanding, you’re not giving anyone space to contemplate, and in turn, learn to prevent others from committing suicide in the future.

What happened to Cañares is a tragedy, and the responses of the general public make it clear that mental health awareness is really something we need to work on in the Philippines especially with regard to suicide.

For those that need help, they can view our list of Suicide/depression hotlines and SilakboPH’s mental health resource compilation.

SHAREIs it Wanderland 2018 all over again or did we fall asleep playing Freudian...

SHAREThe white sneaker trend dominated our 2019. Sure, it’s a hassle to keep...