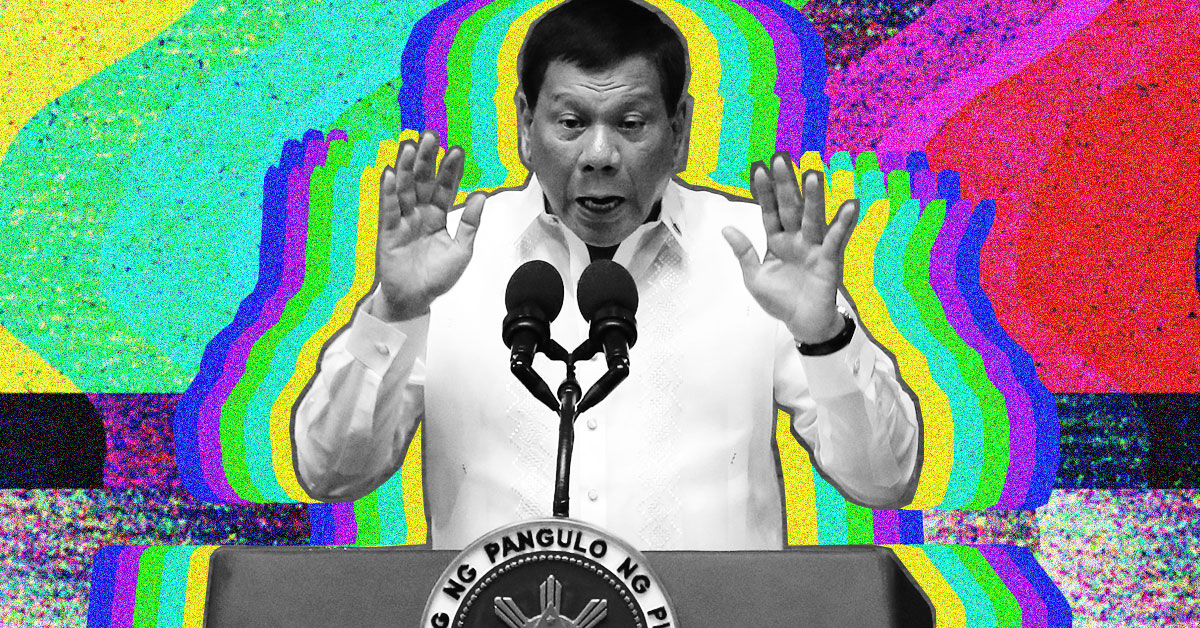 I should’ve skipped this year’s State of the Nation Address.

I wasn’t supposed to watch today’s State of the Nation Address, but as I work in media, I work beside others who want to get in on the biggest story of the day. The whole editorial department turned the office television on, tuned in, and watched.

We even had to prepare pitches in preparation of our coverage. My original pitch was “Why I didn’t watch this year’s SONA,” and in hindsight it would be a terrible title with an equally terrible story. It would indicate a sense of apathy in Scout’s part. It would show that we don’t care about the biggest public speech the highest elected official of our country would give. It would sound like we’re trying to push the idea that disinterest about current events would be the cool thing to do. That would give too much credit on our part, but also it would break our streak of providing a take on current events.

A lot of people are keen on figuring out what the President has to say during his more than five minutes of fame for their own reasons. Manuel L. Quezon III”s informative Twitter thread enumerates who exactly have vested interests in whatever words the president has to say during what is probably one of his biggest moments in the spotlight. Around 3,000 people are invited to watch Duterte’s speech at the plenary hall of the Batasang Pambansa, and hundreds of thousands more are probably watching from their homes. Some schools out there probably took a half-day for their students to watch the SONA and write a reaction paper on it due the day after.

A quick Google search leading to a Wikipedia link says that the SONA “serves as a means to inform the nation about its present economic, political, and social condition.” I would want to know about that. I care about what’s going in on our country. Everyone does.

Instead of addressing various points of growth in a self-congratulatory tone like the previous president’s, this year’s State of the Nation Address was a succession of expletive-ridden, freewheeling storytelling that was also still self-congratulatory. Our president has turned the SONA and its weight carried by its historical importance in over its own head.

For the media, it means a story. At the moment I am writing this, many other writers are typing up their own analyses on the event, from the speech to the red carpet walk and everything in between. I can’t blame them for not taking the SONA seriously; we all need to get creative to get some hits anyway.

I looked up the screen and watched our president deliver his speech. The moment he passed the 50 minute mark I knew this whole thing would take a while. At one point the television froze up and I had to settle on a Facebook live stream to continue watching. My attention span is short enough, I fear, because of how I and the rest of the Internet generation consume our content. But what made me continue? The awkward camera changes, the movements of the sign interpreters, the responses both from the editorial team watching and from social media. Witty retorts and funny remarks on everything and anything related to SONA.

But there is something lost when we jump off on tangents. Whether or not this is the administration’s intention, we lose sight of the bigger issue the moment we focus completely on the entertaining.

#sona2017 The President speak from his heart in a brutal way. Truth hurts to those who are sensitive a and feeling civil.

Historically, the State of the Nation Address is a momentous event fuelled by the gravity of its purpose—to remind a country’s people how the country is doing, and to remind a country’s people that things are going well—and today’s SONA did neither. The president’s biggest mistake this time around is that in an event that talks about the country, he ends up talking about issues in relation to himself. This is not being real; this is being arrogant. Speaking your mind isn’t the same as telling the truth.

What we probably forget in these big events is that the discussion does not end when the speech ends, and has already started long way before the president entered the plenary hall. At this point, it would mean close to nothing to hear what our country is doing well so far from the mouth of the president himself. We already have receipts for that. What we should remember though, is that we’re free to speak back after the president has had his turn. By having an opposing opinion we are not breaking our nation apart, but rather we are practicing our own right to speak out. The SONA is not the end of the conversation about what is happening around us. The rallies outside Batasang Pambansa were testaments to that.

As much as I’d like to think that I gained something by powering through the whole ordeal, I wished I could’ve skipped the SONA viewing party and go straight to the reaction memes, the reaction pieces, the reaction to the reaction pieces, and later, the hardworking editorials. This year’s SONA was a bust because of two things: 1) By ignoring the candy-coated back patting of the whole room of the previous administration, Duterte patted only his own; and 2) There’s nothing to take home. There’s no way we could feel better after that. There’s also no sense in tricking our minds with the consolation that our president was being real. We deserve better.

SHARELocal storytelling is championed by multiple creative industries. From producing films to music,...

SHAREBy Katrina Tiu The sun has risen once again as 2016’s top summer...