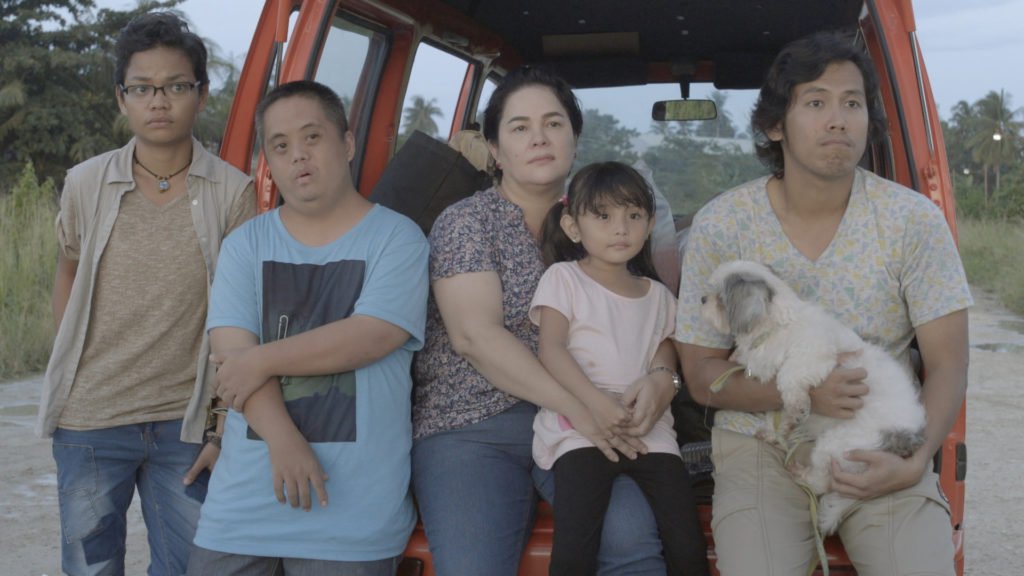 A Cebuano comedy that tugs on both heart and laugh strings, Patay na si Jesus by director Victor Villanueva is a story about a family: an estranged wife and mother Iyay (Jaclyn Jose), disabled son Hubert (Vincent Viado), trans son Jude (Chai Fonacier), unemployed son Jay (Melde Montañez)and their puppy Judas, who go on a life-changing road trip from Cebu to Dumaguete City to make it to their father’s wake. Filled with dark humor, the dramedy delves into typically untouched familial issues.

Showing at 790 cinemas nationwide from August 16 to 22, as a part of the inaugural Pista ng Pelikulang Pilipino, we’ve rounded up eight remarkable facts about the Pinoy indie film, as told to us by the director himself at a private screening held by Columbia Pictures.

Patay Na Si Hesus was made originally as an entry to 2016’s QCinema, first aired last year October. It won two awards: the Audience Choice Award and the Gender Sensitive Film award, as well as snagged P50,000 cash reward for making the cut.

It was originally written in Tagalog

Although a movie that is completely Bisaya, writer Patrick Tabada actually wrote its initial script in Tagalog. As it was an entry to Quezon City International Film Festival, and its judges don’t speak Bisaya, Patrick had to translate everything after it was approved by the judges at QCinema.

Actors Jaclyn and Mailes had to take language classes

Jaclyn and Mailes who play mother Iyay and Iyay’s nun friend respectively are the only two from the cast who aren’t Cebu-natives, so the two had to take Bisaya classes to get ready for their roles. And Jaclyn started her classes around two months before, even before reading the script.

Jaclyn Jose said “yes” to the role after winning at Cannes

Her role as Iyay was brought to her attention before she flew out for Cannes, in which she won Best Actress award for playing a small-time drug dealer in Ma’ Rosa at last year’s 69th Cannes Film Festival, but she actually said yes after. And, the team only found out after she released it officially at an interview with Inquirer.

Chai who plays Jude was supposed to play Vera

Originally written to have another daughter, Vera the all-knowing nerd type, the team decided to take her out of the film due to constricted space of the multicab they shot in. Recognizing that the multicab that Iyay drives would not fit another character, Chai who was casted as Vera at the time switched to playing Jude instead.

Hubert’s punchline “char” was meant to be “chos”

Hubert, who is the son of Iyay disabled by Down Syndrome (as well as played by an actor who has Down Syndrome), has a punchline in the film: “char.” In the script it’s written as “chos,” but since Vincent was unable to say it, it was changed to “char” while filming.

Melde who plays Jay was picked from the crew

Jay played by Melde was a crew member turned actor. Casted last, he was picked by the team as he was a Cebuano-native. A friend of Victor, Melde auditioned after encouraged by the team, and of course he was casted.

Its current screening is a modified version

First aired during QCinema, the film has been modified for its screening at Pista. Apart from the film getting a different color grading, more shots of nature has been added to the film to make it more animated and to better portray the Cebuano life. Also, outvoted by the team, Victor cut the film’s end scene shorter.

SHAREIf you’ve been passing by Aguinaldo Highway in Cavite, for the past few...