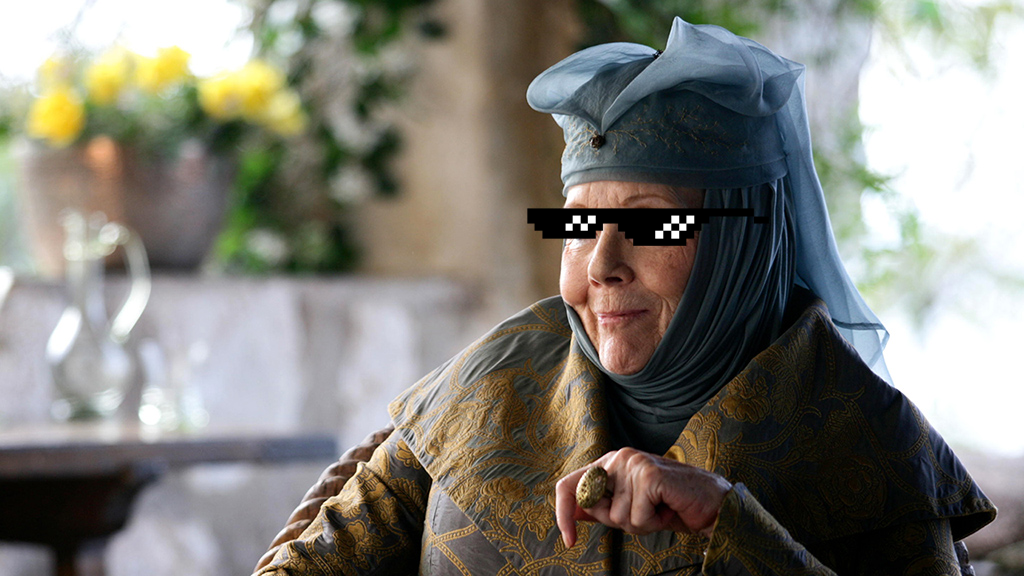 Warning: This post is dark and full of spoilers. If you haven’t watched the latest Game of Thrones episode, get out of here right now.

So basically the best ever Westerosi house just got wiped out in last night’s Game of Thrones, thanks to everyone’s favorite scheming Lannister twins. A (broke ass) Cersei Lannister always pays her debts, which lead to Jaime’s siege of Highgarden, then resulting in the eventual death of the last surviving member of House Tyrell–Olenna.

RIP Olenna Tyrell, who actually won even in her death. The entire time, this boss ass granny was shit-talking the Lannisters in front of Jaime, even after her whole house had just fallen in the siege. While Jaime granted her a painless death via poison (despite Cersei’s arguments), Olenna decided to peace outta there with one last savage comeback–that she was the one who killed his son Joffrey and that she. Wants. Cersei. To. Know.

All Jaime could do was walk away while the poison worked its magic.

And that, folks, is how you go out in style. And the only person who could do that in this entire show was Olenna “Boss” Tyrell, the realest G in Westeros.

She was so bad ass that the good people of social media made the best posts in her name. Here are some of our faves:

Olenna Tyrell. The only person who can WIN while dying. RIP ? #GameOfThrones pic.twitter.com/ys98zGcKy9

LADY OLENNA TYRELL DRAGGING THESE LANNISTERS WITH ONE FOOT IN THE GRAVE I CANNOT. #GameOfThrones pic.twitter.com/uaxnfGbwKj

Check out the awesome scene below:

SHAREBy Coleen Ramos. Illustration by Maureen Gonzales We’re already at the era where...

Now that everyone’s waiting to emerge from their pod, or at least experience...

SHAREWhen Taylor Swift said, “I come back stronger than a ’90s trend,” Tamagotchi...