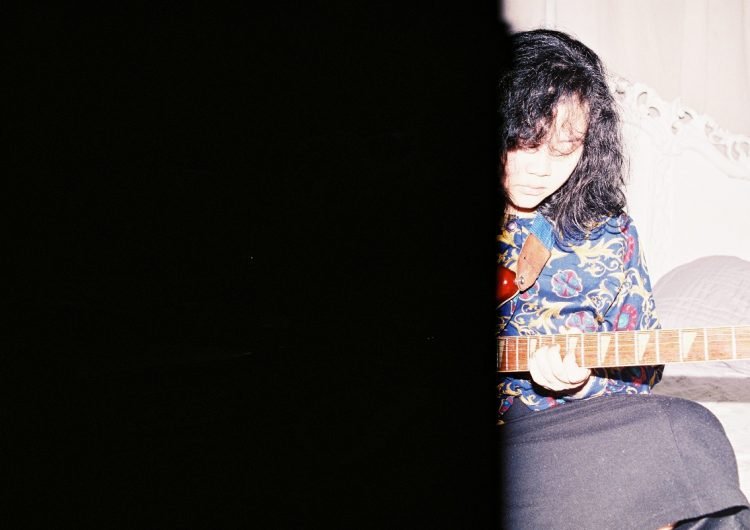 If you haven’t heard much from Mariah Reodica (vox/guitar/theremin/synths), Alyana Cabral (guitar), Dom Zinampan (bass), and Kean Reformado (drums) of four-piece noise pop band The Buildings lately, it’s probably because they’re busy. Since releasing their debut album CELL-O-PHANE last year April, they’ve been keeping it quiet in the music scene, but if you knew anything about The Buildings, it’s that they do as they do in their own time. Their frontwoman Mariah, now based in Baguio, confesses “I haven’t been focusing much on music lately since I’ve been part of the effort to archive Kidlat Tahimik’s vast collection of footage, and I’ve also been working on a script with director Mik Red titled Eerie, set to be shot in 2018, among other film projects.”

Mariah, as she says, doesn’t like to rush or compartmentalize things; “I just do what feels interesting to me at the moment. When I get some sort of itch, I can channel it through a film, music, writing, or all these origami pieces I have lying around at home that I don’t really show anyone. I’m not that prolific and I drift from medium to medium. The ideas just leak into everything. I’m not the master of any of these avenues and that works out well for me.” When I ask her if she’s working on a follow-up release to CELL-O-PHANE, she discloses that there are new songs in the works, but as for tangible releases, none so far. She just nonchalantly brushes off my question with, “It’ll happen whenever it happens.”

Instead, she says that she’s been working on an upcoming solo album release under the name Ilang Ylang-Ylang, which so far has seen the light of day with one song “Let Me Know When It’s Real.” With her recently acquired Baguio apartment, she explains how her thin walls have pushed her to create new songs on her classical guitar that are “very different from the fuzzed-out electric guitar-based stuff with The Buildings.” There is still no release date, as her current set-up of recording “in bursts” whenever she finds herself in Manila, as you could imagine, could only do so much.

Just before you lose hope, here’s some good news. Before Mariah jets off to Gwangju, Korea, for a month-long an interactive art residency for ASEM Creative Industry Young Leadership Program 2017 at ACT Center of Asia Culture Center, she’ll be dropping by Manila to play a gig at Mow’s with her band The Buildings on Oct. 26 for Furiosa’s Halloween party. Today, she leaves us with nine songs that go under the theme: Unsolicited good advice, with the pre-caution, “I am not responsible for any and all forms of damage, accidents, injury, fire, financial losses, fractures, imprisonment, misadventures, natural disasters, wounds, ill health, casualties, inconvenient arousal, suspension, expulsion, misconduct, unemployment, misdemeanors, evolutionary regression, unexpected marriages, mismanagement, paranormal activity, extraterrestrial contact, or any bad decisions that may arise from following any of the pieces of advice listed below.”

“My motto for the year is: ‘My aim is true.’ It hasn’t really failed me so far.”

“When I find myself in times of trouble, Joni Mitchell comes to me speaking words of wisdom: I was raised on robbery!”

“The lyrics roughly translate to ‘I want to quit this band/ It’s so boring”. I think the vocalist wrote this when she was around 19 or 20 years old. They were one of my favorite bands back when I was living in Tokyo, trying to catch as many shows as I could.”

“David Berman writes about something like holding up a toy crystal up to the light and seeing colors you’ve never seen before; he’s one of my favorite songwriters.”

“Bomba Press found this tape by a band named June 12 from Tacloban in the ’70s or ’80s, and digitized it. I don’t think there’s a lot of information about the band on the internet, which is a shame because the bluegrass harmonies on this are beautiful. I’ve been waiting for the rest of the tape to be uploaded for years now (see my SoundCloud comment) but I think the tape still has to be restored. Nerding out aside: the advice here is to PLEASE restore this tape!”

“Grandi Oso must’ve sprung forth from a spring in Hades, Laguna. His new album is one of the most interesting releases of 2017, local or abroad.”

Smog – “Dress Sexy at my Funeral”

“I’ve always had dreams of being in a Manila Sound band (which is why Jazz and I made Ilang Ylang-Ylang.) Also, baduy talaga ang mga boyfriends.”

The Shaggs – “Philosophy of the World”

“These three sisters sound like they’re playing three different songs all at the same time. These are my parting words to thee.”

SHAREIf there’s one thing we know about Laguna-native Jett Ilagan, it’s that he’s...

SHAREFor “Harry Potter” fans, gone are the ol’ days of Pottermore when we’d...