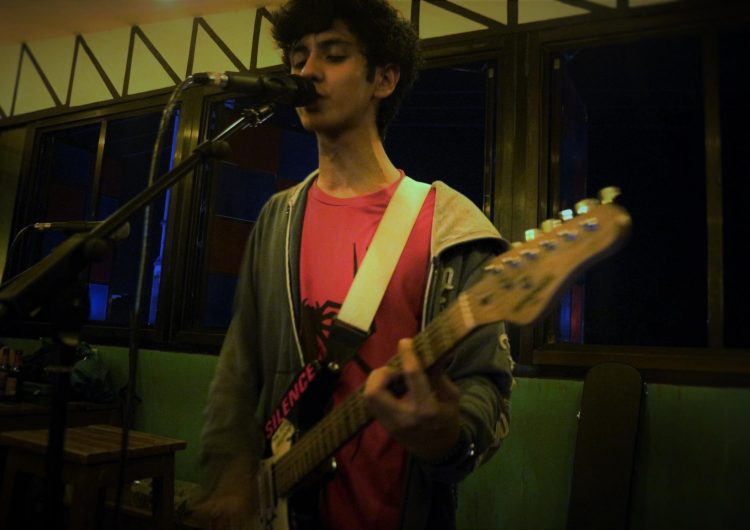 Fugu Musk, for those who don’t know them yet is comprised of frontman and guitarist Raf de los Reyes, vocalist and bassist Riggs Chanco, and drummer Rodge Chanco. They in the words of Raf are a grunge, garage, and punk rock inspired trio that play “loud but intricate” music that stem from an outburst of bottled-up thoughts. First formed amongst Grade school friends as a jamming band, long before Raf was still a member of Chairman Mouse and the The Wants, the band took into full form recently, when Raf decided to tap his best friend Riggs and his brother Rodge so he could release songs he had made throughout the years.

Now, these songs including sole SoundCloud uploads “Freshman” and “Deadly Valentine,” along with four other songs are finally being put out as an EP titled Stay Awake, today, Oct. 13, at Mow’s. Written and recorded by Raf under the theme of restlessness and being unable to sleep, the six-track EP that is to be played live from start to finish tonight tells a narrative of an insomniac who decides to wander the streets late at night, when nothing except convenience stores are open, and his thoughts as he stays awake while the rest of the world is fast asleep. Raf focuses on the “certain kind of restlessness” that is felt when “one is trying to find where they want to be” unaware that they are exactly where they need to be all along.

To celebrate the launch of Stay Awake tonight, we asked Raf to make us a playlist, and he gave us 10 songs under the theme “Halloween.” Because, for one, it’s October, and Halloween is his favorite holiday. Today being Friday the 13th is purely coincidental. As he says, “This playlist is meant to set the stage for horror fanatics everywhere, but I’m going to leave out obvious choices such as Michael Jackson’s ‘Thriller’ because it’s already on every other Halloween playlist.”

And because he loves Halloween so much, he’s left a little treat at the end of each song.

“Never thought I would see ‘misery’ and ‘Green Day’ appear side by side. This song sort of shows the scary side of trying to succeed and what happens to those who give everything but don’t get anything in return. It also reminds me of the film, Misery with Kathy Bates as the antagonist. It’s worth a watch.”

Royal Blood – “Out of the Black”

“I think this music video is like Quentin Tarantino meets J.J. Abrams. And maybe even David Lynch. It’ll make you hungry for a Snickers bar. This song reminds me of Shaun of the Dead, which makes fun of zombie films as a whole. It’s really entertaining. Not a horror movie, per se, but still worth it. Hell, I would suggest the Three Flavours Cornetto trilogy, which has Shaun of the Dead in it, as well as Hot Fuzz, and The World’s End.”

“’You say it again just to rub it in, baby. How can you not have a little fun, dark face honey.—I found this song on a “Villains” playlist one day when I was browsing 8tracks in 2014. I felt that this was a good song to put into a Halloween playlist. As for a film, I’d go with The Evil Dead, because why not?”

“I knew I was going to choose a song from Manic Street Preachers’ Holy Bible—which is an album that talks about horrific stuff, like really dark subject matter. The lyrics in this song are more of a statement about being alienated, but the way the lyrics are written, it’s quite explicit. In the spirit of alienation and cabin fever, I suggest Stanley Kubrick’s The Shining.”

“This is a song about those who start wars, and they will eventually get what’s coming for them. For this song, I happily suggest Jacob’s Ladder, a psychological horror film.”

“This is a song about being a vampire who cannot bring himself to kill (I guess that means he can’t survive.) And, the fact that Sting visually inspired Constantine—one of my favorite comic book characters, is definitely a plus. Staying close to the subject of vampires, I suggest Let the Right One In.”

“What makes this song frightening to me is that I see it written from the point of view of an abusive partner. This song doesn’t remind me of any horror movie, but if I were to suggest something, it’d probably be Cabin in the Woods, because I like movies that make fun of horror movies.”

“I feel like this organ-filled song, with the funky tendencies of Franz Ferdinand, brings that classic ‘Halloween’ feeling; you can hear a theremin in there at some point. They Live is a great movie to go along with this song. You should check it out.”

“So you scream, whine, and yell, supple sounds of dinner bells. We all will feed the worms and trees, so don’t be shy.”

This is a grim song about how we all will be swallowed by the earth someday.

Keeping up with the theme of eating, I suggest, “Silence of the Lambs”.

“I think that the story of this song embodies a Horror B-movie. However, the instrumentation and the orchestral arrangements are quite beautiful. I really like this song. Also, since this song served as a finale to Avenged Sevenfold’s concert in Long Beach California, I think this would serve as a pretty good finale for this playlist; this song reminds me of the comedic horror film Scream, which is pretty much a tribute to slasher films.”