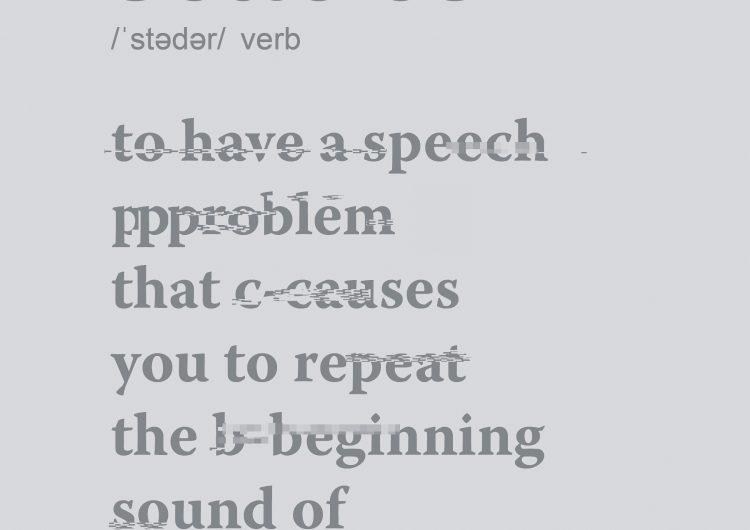 My fondness for words began at a young age, around the same time I developed a stutter. It is odd since I’d just discovered the beauty of the written word only to get inhibited verbally. Noticing this discouraged me to speak. As much as I tried to appear as a normal child, my silences became more frequent to the point that my family began to notice. So that I’d be comfortable, they learned to adapt to my pace.

Slowly, things around the household began to change. It became a game of who could say the least words per day. Mornings became dedicated to quiet goodbyes and silent car rides to school. Gesturing became commonplace, as we sat down to eat our family dinners in stark silence. I was learning to be comfortable in silence, and this continued as I grew up.

When I first started school, it became clear to me that it was a different environment. People here would remember first impressions. Keeping up appearances was a must. I dreaded the day I had to go to the front of the classroom and introduce myself. I remember having a hard time getting words across. I felt like drowning after the ordeal, every time.

Ironically, it would be words that kept me company throughout my schooling. My love of reading began when I discovered a few tattered short story collections lying around the house. The Gift was one of the stories I vividly remember from that time. The tale recalled a man and his wife who exchanged Christmas gifts knowing that they can’t afford to buy presents for each other. The man proceeds to sell his gold watch to buy an ornamented hair clip for his wife. The wife sells her hair to finance a gold chain for his watch. The themes of the story are acceptance and sacrifice, both of which I had to undergo due to my lack of words.

I refused to speak to others about my condition. I dove into books and the internet hoping that a study or an article could bring some much-needed relief. I once read in an online study conducted by the University of California that women speak an average of 20,000 words daily as compared to 7,000 words for men. On most days, I speak less that half of the 7,000 word daily average.

Long conversations exhaust me, and I only talk at length whenever I have to be polite or in special situations. Over time, I began to relish quiet situations. One time my girlfriend asked me why I was grinning over a cup of coffee. “Because I ordered it without any pausing” was my reply. This mundane task of ordering food felt like a triumph given the struggle I go through every time I speak.

As I grew older, the stuttering worsened to a point where I was unable to speak coherently at all. Strangers finished sentences for me, and breathing became difficult due to the strain of talking.

This is when I decided to seek help, first to my parents in a pre-rehearsed speech taken from an advice column. I remember getting the message across, after four or five takes, not aware that the road to recovery would be a long and arduous affair. I took a leap of faith and started speech therapy sessions shortly afterwards. My therapist told me something shortly after I began my sessions: “Take time to understand yourself and your stuttering. It is important to accept yourself before you can expect anyone else to accept you. Do not be afraid to ask people for help or to talk about the speech impediment. At the end of the day, what you say is more important than how you say it.”

At this point I felt a mixture of relief and excitement, because for the first time someone was sincerely interested in what I had to say. Even though my speech was difficult to understand and it takes me a while to finish sentence, she always nodded in encouragement.

These sessions felt different from the usual classroom setup that I was used too. Back in school we were tasked to recite on command, and I was scared each time my name was called. Here, it was different. These open-ended conversations reminded me of a pivotal scene in The Catcher in the Rye, where Holden Caulfield paid a streetwalker just to listen to him ramble about life.

Fluency didn’t come easy at first, and I spent the initial sessions sitting there mulling over my words and stopping altogether when my mouth started dancing like a convulsion. So this we did, day in and day out, and despite those harsh hospital lights that denoted fear, I felt glad there was someone willing to listen to my case and point me in the right direction.

My therapist distilled stuttering into “word blocks”. It helped me understand that speaking, like breathing, is a series of mechanical steps. The repetitive nature of word-breath-word slowly helped me gain back control of my speech. My therapist explained that these word blocks must be navigated through in order to enforce fluent speech. Much like the creative blocks that artists have, breaking words down into small manageable chunks helped conversations flow better.

At the beginning, I remember asking that question most people fear the answer to: “Is it curable?” My therapist replied, “No, but it can be managed.” The only thing I could say then was “Okay”, while trying to hold back the fear that this condition would be a lifelong struggle, and something I would have to live with.

But I kept pushing on, unraveling the intricacies of how words were formed and why I had the pronounced difficulty of speaking them.

The Stuttering Foundation of American defines stuttering as a communication disorder in which the flow of speech is broken by repetitions (li-li-like this), prolongations (lllllike this), or abnormal stoppages (no sound) of sounds and syllables. In my case, I experience stoppages in which I have trouble breathing. I often have to stop and start over due to losing my train of thought each time my mind says, “Stop.”

Sometimes, there may also be unusual facial and body movements associated with the effort to speak. When I stutter, my facial muscles become distorted and tense due to the strain on my vocal cords trying to get words across.

Stuttering may occur when a combination of factors comes together and may have different causes in different people. While there is no concrete data on stuttering in the Philippines, the Stuttering Foundation reported that more than 70 million people worldwide, or about 1% of the worldwide population, stutter.

Today, there still is a stigma associated with those suffering from communication disorders, with the public’s understanding of speech impediments polarized into two camps: those that view it as a mental illness, and those that see it as a quirky personality flaw. Even mainstream media is taking note. Take for instance the 2010 film, The King’s Speech, about the stuttering King George VI. It won four Academy Awards, including best picture, best director, best actor, and best original screenplay.

The King’s Speech is a heartfelt portrait of a man who is trying to live out his life despite the immense pressure on his shoulders. He has to make wartime speeches to soothe his frightened and battered nation. I applauded the director’s daring move to present this sensitive and well-ridiculed issue in a positive light

I sympathize with King George, knowing fully well you can’t get anywhere without acceptance, support, and trust. But after taking off your rose colored glasses, I began to see that people aren’t always rooting for those that are different. At some point, communication breaks down, and feelings are hurt. For those that experienced hardships, what is there left to do but keep pushing on?

In The Book Thief, Mark Zusak’s novel about the Nazi Occupation, a young girl’s journey culminates with her professing her love for words. The last line in her diary reads, “I have hated words and I have loved them, and I hope I have made them right.” The words strike me as clear and brutally honest. I’ve lived my whole life being afraid of words, and it’s quite ironic that now I see myself in the business of telling stories. As long as I remember, I have wanted to write for a living despite my haphazard speech.

There is something about language and it’s infinite variations that excites me and pushes me forward. Words somehow have the power to cross borders and I want to be there in that threshold, penning stories the best I can. I have hated words and I have loved them, and I hope I can make them right.

SHAREI’ve always embodied the “strong, independent woman” vibe throughout my adolescence. But I’ll...