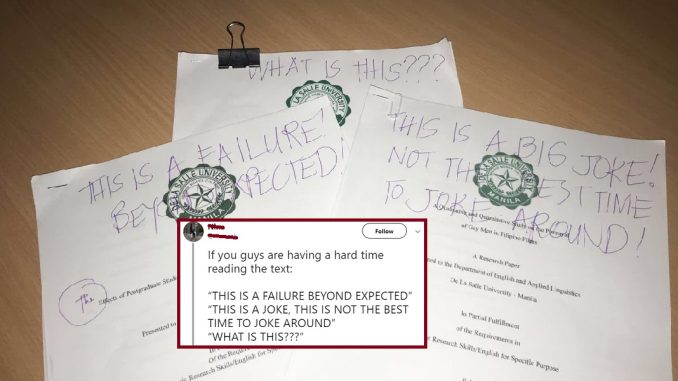 A freshman at De La Salle University, Manila took to Twitter last week to share her professor’s comments on a research paper. The comments, written in screaming all-caps across the front pages, read: “THIS IS A FAILURE BEYOND EXPECTED!”, ‘THIS IS A JOKE! THIS IS NOT THE BEST TIME TO JOKE AROUND!”, and “WHAT IS THIS???”

The tweets, which have since been set to private, revealed that the student was not the only one in her class to have been given this type of “constructive criticism” by the professor. User @nine_nah said, “People were crying before and after they got their research papers; it was absolute hell. She gave just a little over five minutes for each of the papers given and had noted ’10 or more mistakes equals an AUTOMATIC FAIL.'” The student lamented that it was “an entire term of work gone in an instant.” She then proceeded to detail the difference between “constructive criticism” and an “insult,” saying that this professor was not like this throughout the term and that she or he (the identity was not disclosed) exhibited a different demeanour prior to the incident.

“This kills drive, motivation, passion, heart, and everything that keeps a human being going. Criticism is constructive and helps someone grow. Insults belittle the people they are aimed at.”

The student clarified, “I am not criticizing the prof at all for the grades or their overall character. This prof can be nice, helpful, and funny. Rather I’m condemning this type of behavior and insult disguised as criticism.” She follows up with its drastic effects on one’s mental health with, “Comments like these could kill someone (literally and figuratively). This kills drive, motivation, passion, heart, and everything that keeps a human being going. Criticism is constructive and helps someone grow. Insults belittle the people they are aimed at.”

This particular statement brings us back to past incidents involving students who committed suicide, reportedly due to academic concerns. These issues have sparked questions if college universities had learned its lesson on the toxic culture of over-work, while others said that the student merely had to “suck it up.” Because the story remains open-ended (i.e. maybe the professor left more comments unseen in the photos, maybe the students’ papers were just THAT bad), we can’t take sides for sure. However, one thing is certain: we all go through tough figures—whether at the workplace, school, or home—but it’s not something that is healthy to normalize. As one netizen pointed out, “Master-slave system in education should be a thing of the past.”

Words by Patricia Recto
Photo from The LaSallian

SHAREAs hard as we try to get away from it, the unfortunate reality...