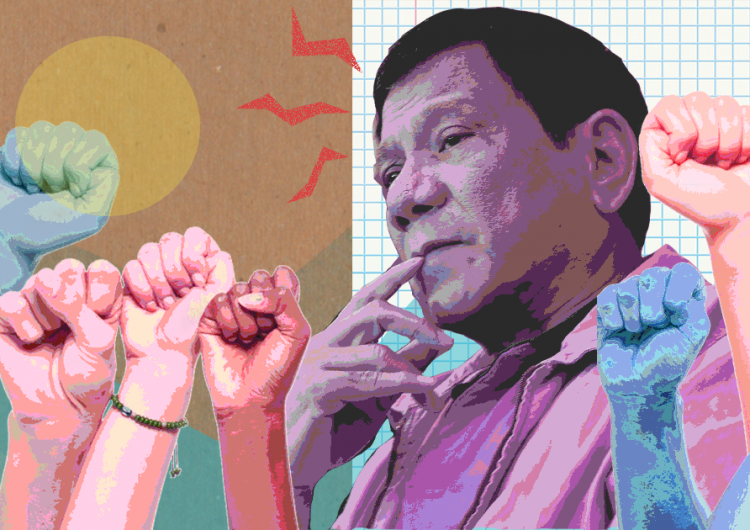 Last June 12 marked the 120th independence of the Philippines from Spain, a period of time that’s not even half the amount of years of the Spanish occupation in the country. This time, the President graced us his presence in Kawit, Cavite after skipping last year’s ceremony altogether.

Duterte’s first Independence Day appearance was met with protests from various parts of the country, expectedly. But the thunderous heckles of a small group of protesters that interrupted Duterte’s speech was the biggest news that day.

A video of the scene surfaced mere moments after: just as Duterte is about to take the podium, a couple of protesters shout, “Duterte, traydor!” (Duterte, traitor!), “Hunyo Dose, huwad na kalayaan!” (June twelve, false freedom!), and “Duterte, patalsikin!” (Oust Duterte!)”, the nearby police grabbed and shoved the protesters out of sight tearing their signs into pieces. All this, while Duterte can be heard saying stuff like “maximum tolerance” on the microphone. A few ironies are lost within this administration it seems.

The questionable presence of Chinese ambassador Zhao Jianhua at the Independence Day rites is not amiss. China’s constant militarization of Philippine’s economic zone, and the relentless bullying of our Panatag Shoal fisher folks –our very sovereignty is under attack.

China is no saint, with its tyrannical empire on full display for years, invading neighboring countries, Vietnam, Taiwan, and Indonesia, and can be largely attributed for its poverty. Now, the Philippines will become yet another conquest.

In the age of Chinese Coast Guards climbing and stealing our small-time fisher folks’ catch in exchange of “noodles, cigarette, and water” how independent exactly are we?

To add insult to injury, Just last week, the Malacañang Palace said they are not going to press charges against China on the destroyed reefs in Scarborough. Who does this administration answer to? We celebrate our freedom from three hundred years of oppression from the Spanish when a new blatant oppressor rears its head in the form of China.

How do we expect to be free from China if we can’t even speak freely in front of a man who has the sworn duty to uphold our constitution, guarantee of free speech included?

The film is set to be released globally in December