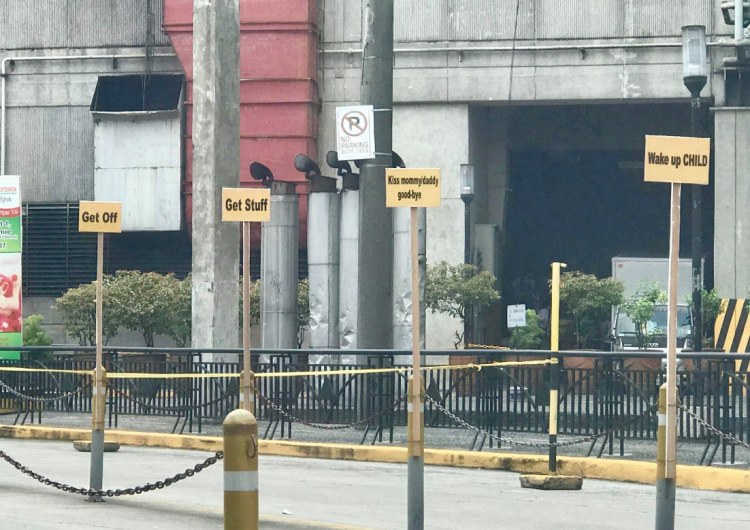 Manila’s traffic isn’t really an unsolved mystery. We know the reasons why it is, but we live in denial on how to solve it. A major reason is following rules and regulations. We have a lack of control when it comes to our road rage that we think our urgency to go from point A to point B is above the law. This attitude is not limited to huge highways alone, it also goes for campus grounds like Poveda. And they’re not having it any longer.

Earlier this week, Saint Pedro Poveda College in Ortigas found a unique way to solve the huge traffic problem within their campus. A tweet from the user, @foxrots, last June 26 showed the new signs near the drop-off area of the campus. The signs instruct the parents or guardian how they should proceed to the drop off area step by step. It’s specific enough to look dumbed down to the point that even a pre-schooler would comprehend the rules. That, and when you read them, you sort of hear them in Siri’s voice.

GUYS THIS IS SO FUNNY. POVEDA IS SO SICK AND TIRED OF UR SHIT CAUSING TRAFFIC AT THE DRIVEWAY SO THEY LABELLED THE STOPS ON WHAT YOU SHOULD DO BY THEN IM DYING ??? pic.twitter.com/GsGsj75CoU

In a span of three days, the tweet blew up and got thousands of people talking about Poveda’s unique solution to their traffic problem. Here are some hilarious tweets from the thread that got us wheezing:

? ? ? We we’re so shocked we actually didn’t move the first time we saw it.

Wheezing and meme-ing aside, Poveda’s new drop-off signs show a real problem on discipline that the country still deals with. How this lack of discipline affects everyone is no joke. The signs were only placed just because the campus finally has enough of the internal traffic. Having internal traffic on school grounds is a thing that shouldn’t happen in the first place. A user from this thread captures the serious problem the signs are addressing in this one tweet:

I think it’s necessary because “common sense” isn’t all that common. If a couple of signages can help us all treat each other with more civility and respect, there is long line of vehicles doing drop-offs in the morning after all, what’s there to find fault with?

Poveda’s solution to the traffic also echoes the previous escalator signs that SM Malls and other shopping centers followed in the past years. Don’t get us wrong, it’s so funny that simple things such as dropping off someone or standing on the right side of the escalator had to be instructed to us through visuals.

But the real joke here is us. Is this whole thing just tongue-in-cheek? The budget and effort spent on these signs make us say no. The fact that we still need visuals for us to remember simple discipline and basic rules says a lot, not just about traffic, but also in how parents and their children behave at the drop-off. Another fault on this is the signs themselves. Signs that read “Wake up CHILD” and “Get Stuff” leans more on “butt of jokes” rather than “road to discipline.”

All these signs wouldn’t really point to progress. What is pointing out though is that we need to take our lack of discipline seriously —implementers and citizens alike.