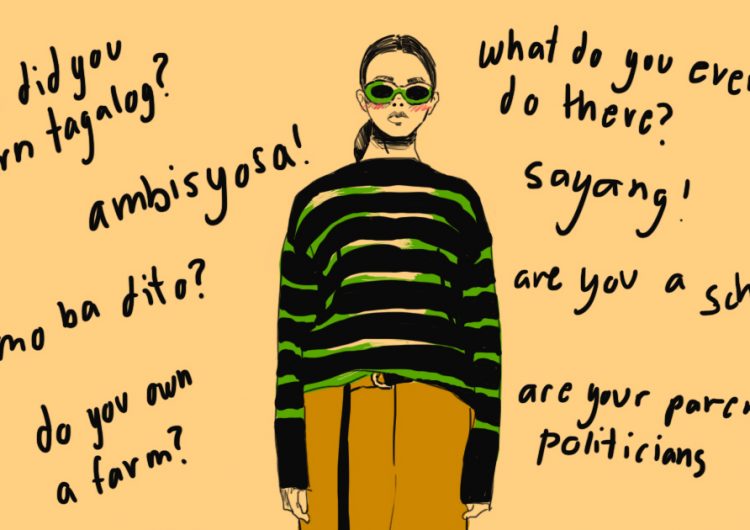 I’m 19 and I live in the province where people mostly treat “us” like some sort of alien because of the choices we make in life. Like the clothes we wear, the music we listen to, the things we do, the words we say and the photos we post online.

We experience nightly debates with family as we try to convince them how much we value the art of clothing—explaining to them that it’s something we’re really passionate about. Or we run into arguments when we start to disapprove of what our lolo and lola say about how brilliant the president is. It’s frustrating. People from the province, at least in my province, don’t agree with this kind of “behavior.” They believe the country is just a big, happy place with its own set of rules that can’t be tested. Rules we should obey.

Well, this experience is not fiction. Welcome to the province.

I’m writing this for the sake of understanding. Once upon a time, there were people who told me I couldn’t make it. The narrative I grew up with every time I would tell my parents I wanted to live in Manila and follow my dreams was met with a resounding “No.”

Apparently, living in the province means following the traditional career trajectory—education, law, public service, medicine or business. Or enduring the struggles of studying the same courses your older sibling took. Where the way of life is simpler, so are the options in making that life worth it. So are the people from the province who have undeniably mastered the art of stereotyping. It’s distracting. It’s hard for someone like me to follow the craft I really want when I hear people in my own place, or my own family, take it as something inappropriate.

It’s hard for someone like me to follow the craft I really want when I hear people in my own place, or my own family, take it as something inappropriate.

Growing up, I was told that NCR has that culture we’ve always wanted. I was told that this is the only place we might love and curse at the same time. The city of dreams where budding fashionistas get the spotlight, writers get to publish their works, artists get to sell their art, actors get to perform in front of the camera and businessmen get to achieve their sales.

Of course, I had conditioned my mind to always think of the glossy image of Metro Manila as something attainable for those who grew up in the province—a general belief of a “creative culture” that we’re free to aspire for, though ultimately can’t unless we defy what is expected of us.

Is that the truth? Is believing in Manila as a cultural mecca real? Perhaps not.

Being creative in the province also connotes being ambitious and inappropriate. Not to mention the numerous times we’ve been called “too much” by elders, reminding us how crazy the latest generation is. Or stressing the challenge of being far away from Manila where we believe the actual scene of showcasing our craft without the nonstop judgment lies. Is that the truth? Is believing in Manila as a cultural mecca real? Perhaps not. Manila can be swapped for with any of the “big cities” from pop culture but it’s a place where I can truly be myself. I know it’s not a dream. It’s something worse: unreachable from this provincial ground where I am currently rooted in.

But I believe shared struggles of fellow creatives matter too. Here, they share some of their thoughts and experiences:

“The hardest part of being a young creative living in the province is that our chances of exposure and growth are limited since we are physically far away from Metro Manila. Like in my province, there are a small number of agencies and companies that cater to creatives, which hinders us to explore our craft. There’s also this stereotype that creatives only exist in Metro Manila—that you cannot be a legit creative if you live in rural areas.”

“I think the hardest part of being a creative or fashionista in the province is handling the judgmental stares and comments from locals. As an individual whose passion is makeup and fashion… it’s hard for me to express my style in the province where people, young and old, disapprove of my style. The probinsyanos are known for being conventional anyway. But like other challenges, I see this as a stepping stone to ‘up’ my drive in dressing as loud as I can.”

“Siguro it would be the concept of the shoot lalo’t dito sa province limited ang pwede maging props and locations. But despite being limited sa resources and location, mas free ka dito to move.”

SHAREAs you well know by now (you’re reading this, which means you’re on...