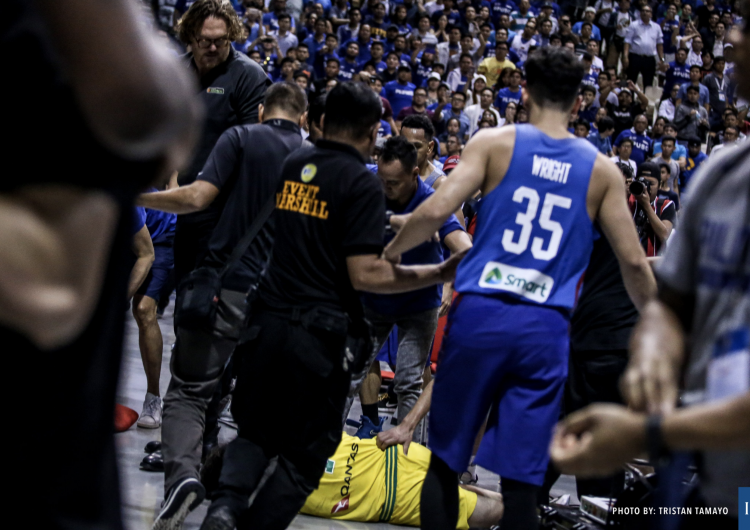 Oh boy. It was Monday evening when a supposed FIBA World Cup Asian qualifier held in the Philippine Arena between Gilas Pilipinas and Australia ended in a fight that would go down in basketball history.

Here’s what we know: Australia was well-ahead of Gilas throughout the duration of the game. On the third quarter, Gilas’ Roger Pogoy took a hit from Australia’s Daniel Kickert.

Immediately after, all hell broke out and benches were emptied as players from both teams joined the brawl happening in the court. Even Jong Uichico, Gilas’ deputy coach, was seen throwing in a few punches to Aussie player, Christopher Goulding, who at the moment was already getting beaten up by another Gilas player.

And even during warm-ups, the teams were said to be already up in each other’s nerves…

Allegedly, there was already presupposed tension between the two teams even the day before the game. This was after Australia reportedly removed the decals of Gilas’ sponsors from the court. And even during warm-ups, the teams were said to be already up in each other’s nerves, only a few hours away from finally exploding into a full-on battle royale.

After the fight, a total of 13 players–nine from Gilas and four from Australia–were ejected from the game. With only three remaining players from Gilas and after deliberation from the judges and referees, Gilas lost to Australia by default–all while the Arena’s being filled with chants and cheers from Gilas fans.

As with any news outbreaks, Twitter did its thing. Some Gilas fans and netizens who took interest in the fight interpreted the brawl as having been an appropriate protective measure. After all, it was Kickert who elbowed Pogoy in the first place, they say. Here are some of the tweets:

No judgement on our #Gilas players should be passed by people who were not in the situation. I feel they just defended each other. Australian team already disrespected our country when they ripped off decals on the court. #LabanPilipinas

Gilas Thoughts:
My dad told me to not fight unless absolutely necessary. But when the time comes, throw first, throw fast, throw hard, get your friends’ backs.

Also, those who break the rules are trash, but those who abandon their friends are worse than trash. (Kakashi Hatake)

I am more shameful of Filipinos bashing Gilas for their behavior. It's easy to say that they should have not done this and that. I firmly believe that you'll never know 'til you get there. And you'll never know when you don't have that all-in passion for Pinoy Basketball #FIBAWC

Gilas was like a bunch of Katipuneros fighting for the country

Australia’s bullying and “racism” were also pointed out by other netizens who said they would do the same thing their idols did.

Trash talking is normal in basketball. But when you call the Philippine Team midgets and monkeys, you cross a dangerous line. Filipinos are very hospitable and respectful. The world knows that. #RespectBegetsRespect #GilasPilipinas #FIBAWC #FIBA

Kickert needs to be banned for a long time for that elbow, but since he's Australian and they've been turned into the victims of an attack by "savages" he won't.

Again, not defending what Gilas did and the way we reacted was bad, but people, be fair in analyzing what happened.

Don’t hate gilas! They upheld Filipino values until the 3rd quarter while being taunted and being called monkeys by the other team! Abueva was even on bench to avoid fights! They held out for so long! ? #FIBAWC #GilasPilipinas

There were others, however, who were embarrassed and thought that the brawl was unnecessary and was a poor judgment call on both teams. It was a prime example of our “macho culture,” argued this Twitter user.

The stereotypical Filipino macho is a "siga" who performs physical violence to assert his masculinity. The prevalence of this macho culture is the reason why fans are applauding Gilas' brawl. This machismo populism is also the reason why leaders like Duterte is being celebrated.

Shortly after the incident, Gilas Pilipinas’ Terrence Romeo took to Twitter to express his sentiments and defend his team’s action.

I’ll ALWAYS support my Gilas brothers, and I commend them for sticking up for one another 2nyt. And as NATIONAL athletes we also have an obligation to represent our country in the best way possible. Playing on the World Stage, in front of thousands at home…cont..

While we do not have anything against the players for standing up for their teammate, the actions from both sides may be uncalled for. It certainly says a lot about how we’ve measured up masculinity and male victory by how many punches one was able to throw.

Sorry to say, but you’re cheering for a different sport.

What’s more alarming was the fact that the fans present in the Arena cheered and cackled while the fight was taking place as if it was just some casual spectacle. Beyond cheering for their supposed “brotherhood,” people cheered because they were witnessing a live brawl. It was as if there’s nothing more that can hype a crowd up than a bunch of men wrestling each other. Sorry to say, but you’re cheering for a different sport.

Both sides have already issued statements but FIBA has yet to announce the disciplinary actions to be imposed on the teams. We’ll be here to witness how this narrative unfolds.

SHAREFilipina wrestling fans were taught men get championship belts, while women get lingerie...