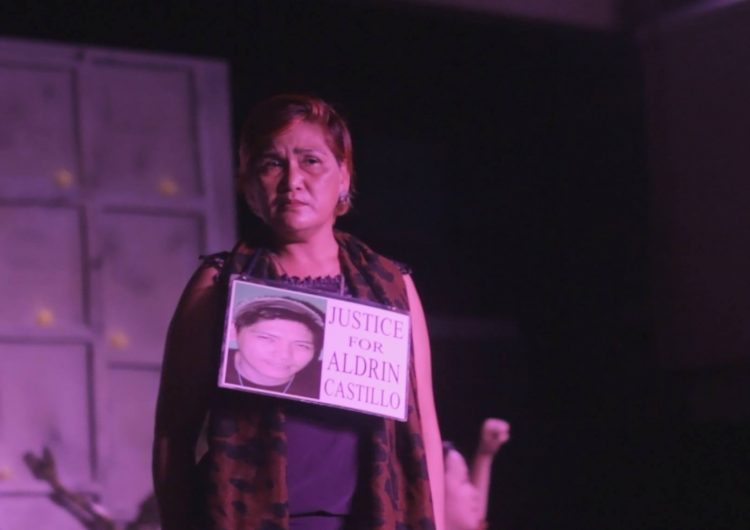 In these times of injustice and muffled screams, Sa Digma ng Halimaw, isang dokyu teatro delivers the unheard and unseen stories about the war on drugs through a documentary theater. Narrated from the perspective of the victims, their families, and the community affected by extrajudicial killings, this performance art becomes a social movement criticizing the monstrous process the country is forced to face today.

Brought by Tanghalang Mulong Sandoval (TMS), Sa Digma ng Halimaw, isang dokyu teatro prioritizes the rawness of their stories. Before developing a script, they used real words from real people affected by the extrajudicial killings including “4 mothers of slain sons, a daughter whose parents were both killed at the same day, 2 survivors and a social worker. At the same time, TMS aims to include stories from a journalist and a lawyer,” the production team indicated on their Facebook page.

If you’ve been following online protests #StopTheKillings, #StopTheAttacks, and #EndImpunity, this is the perfect avenue to be in the struggling sphere to fight with, and not just fight for, the victims of the current administration’s tactics.

Performances at the Commission on Human Rights’ building to the Kaagapay areas have been crossed out; their next show is on Nov. 27 to 29 in Bulacan.

Tickets are at P250 each for the CHR shows. Meanwhile, community shows are free. Proceeds from the paid runs will be used to fund more free shows, so the message can come across a whole lot more accessibly, engaging a wider audience.

SHAREAlthough this may be the first time we’ve talked about this in this...

SHAREIn an effort to establish ourselves as tastemaskers, us, the Scout team, listed...