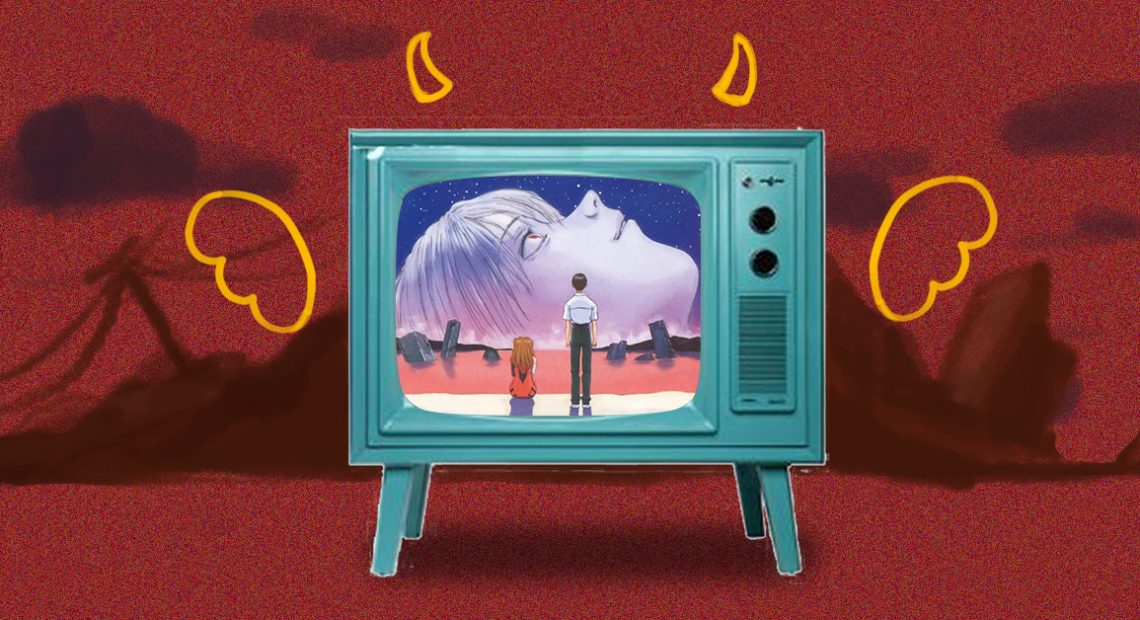 Heard the great news, anime fans? Our favorite existential mecca anime will be on Netflix pretty soon. The streaming platform announced that Neon Genesis Evangelion is coming this Spring 2019. And we cannot wait to get traumatized by this anime all over again.

Read: 5 anime shows to watch if you think anime is not for you

“This fucked me up,” is the headline GQ used when reviewing Neon Genesis Evangelion. And we couldn’t agree more. But let’s acknowledge how its “mind fuck” elements made the anime influential and iconic.

Neon Genesis Evangelion introduced the extent of what the mecca genre could be. Apart from entertainment violence, it introduced existential horror and psychological drama in mecca anime. It’s disturbing but so beautifully executed that it’s hard not to love or admire.

We’re a month away from saying goodbye to 2018. And yet, spring still feels a bit distant from us. Saying  “Shinji, could you get in the EVA this time?” 100 times won’t make EVA get uploaded faster either.

So while we wait for its Netflix debut, here are some similar animes available in the site to fill the void for the meantime. Fair warning: these animes will leave you screaming “nani” into the ether. Trust and believe.

This dark science fiction film takes place in a distant future where humanity are “illegal residents” in the eyes of humanoid robots called “safeguards.” Unable to control these humanoids, all hope is lost for society. But a lone gunslinger named Killy possesses a rare gene that could save the human race.

It took 20 years before someone took a chance on bringing Blame! to life. And safe to say, it was worth the wait. The film manages to bring justice to the manga’s philosophy through layered symbolism in a dystopian setting.

It follows the lives of Akira Fudo and Ryo Asuka, two best friends trying to stop the return of ancient demons to Earth. But things go awry after Ryo urged Akira to unite with a demon in order to bring these creatures’ demise. Akira turned into a devilman, possessing the powers of a demon and the soul of a human. What followed was a chain of events that plunged humanity into chaos.

Read more: Want to question your existence? These 5 shows might help

A grim future where the downfall of our solar system produces a society of genetically engineered refugees who escaped Earth. Travelling in the spaceship named Sidonia, the series follows Nagate, a talented pilot who rose to the ranks as the ship’s defenders. Along with his co-pilots, they battle against shapeshifting aliens who want to eliminate humanity.

The show weighs in on the societal implications of adapting to a new environment after the end of civilization. It’s a deconstruction of the space opera genre mixed in with dystopian themes. This is perfect for anyone who loves Neon Genesis Evangelion’s mecca elements more than its philosophical stances.

Could murder and time travel go hand in hand? This anime says they can even go on a date some time. Erased might have the answers to the infamous Trolley problem that stumped moral philosophers.

In this anime, the 29-year-old pizza delivery man and aspiring manga artist was given a chance to save his childhood friend from getting murdered, but the price of this was his mother’s life. It left him in a loop of saving lives through time travel in hopes to catch the killer orchestrating this string of murders.

From pop collabs to soft jams, here are new tracks to complete your...

SHAREBy Celene Sakurako Working in the arts is not just all fun and...