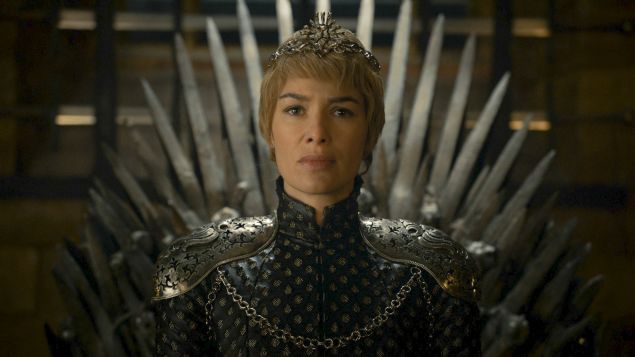 Every ruling member of Westeros royalty in Game of Thrones has had their own crown design, and after swiftly eliminating the opposition and landing herself on the seat of the Iron Throne, naturally Cersei Lannister is going to have her own crown.

According to GoT costume designer Michele Clapton, Cersei’s crown is made to symbolize her loneliness at the top and the journey there. (She also says that Cersei wears more jewelry in times she’s not feeling too confident—her sparse look in her last scene then shows how powerful she’s feeling at the moment.) The crown is more silver than gold, representing a full disassociation with House Baratheon now that she has no more children.

“I chose to make it in silver with just wisps of gold to try to show her isolation, her mental disentangling from her family,” said Clapton. “She doesn’t have to try and prove a link [to late husband Robert Baratheon].”

In contrast, her son Tommen’s last look on the show was a heavily bejeweled one, signifying how all his royal responsibilities have been holding him down. His death still has to be one of the saddest kills this season.

SHAREIf there’s one brand that’s off to combat cabin fever in their own...

SHAREFrom coming-of-age flicks to political tales, a dynamic range of cinema is at...