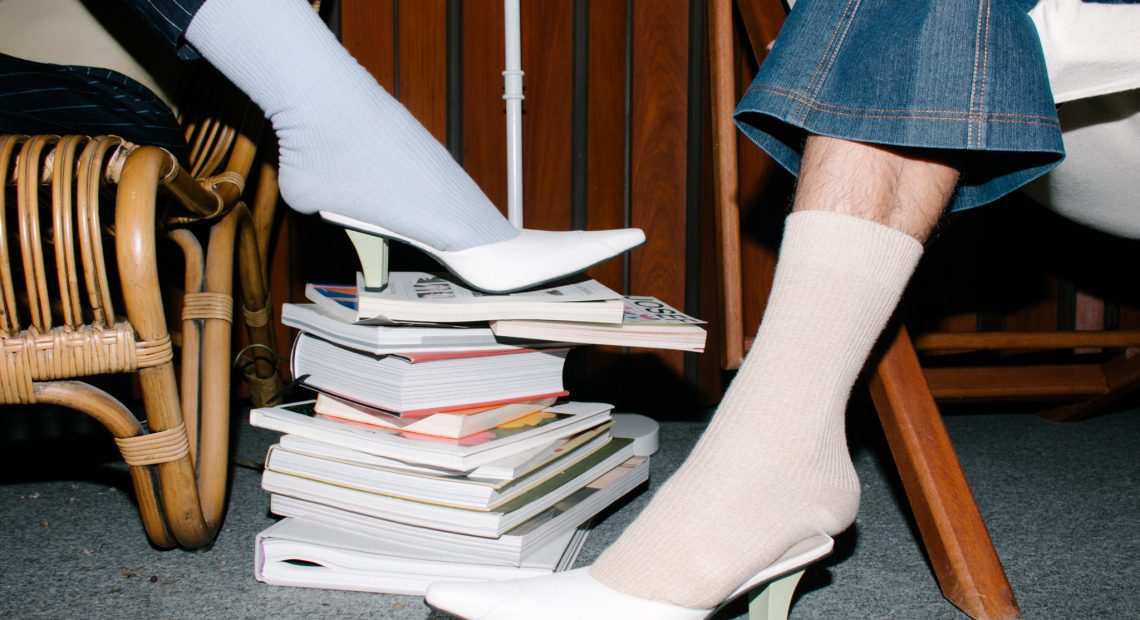 Studio Josanna has risen to public consciousness just last year. Carl Jan Cruz featured the heels in his S/S19 campaign and even brought them to Paris Fashion Week. Isabel Sicat and Aiala of Toqa wore an early prototype of the Fettuccine in their Northern Living cover. Meryll Soriano also wore them in Whammy Alcazaren’s Never Tear Us Apart. Karen Bolilia and Anna Canlas, the duo behind the revival of this ‘70s Marikina-based shoe brand, wore them just about everywhere.

We are at Cojuangco and Sons one Tuesday afternoon. The space, reminiscent of offices in ‘80s films like Ishmael Bernal’s Working Girls or maybe Nora Aunor’s office in T-Bird at Ako, has aged well. The shoes are on display in the middle of the old suite. They don’t seem out of place. “When I saw the shoes from the Josanna archives, they were definitely not in season but they felt magical,” Anna says.

Magical is indeed the right word to describe Josanna. Every shoe bears an enchanting allure akin to those moments from one’s childhood where the words from a bedtime fairytale barely make sense yet the child is charmed to believe. Perhaps it springs from the delicate process that occupies the shoemaker hands for six weeks. Or maybe it comes from the fish skin magically turned into shoes, or the long straps of Fettuccine that you wrap around your limbs like vines hugging a tree trunk. This magic is something you’d only understand when the heels are on your feet, tying the winding strap around your legs—muscular and hairy, in my case. 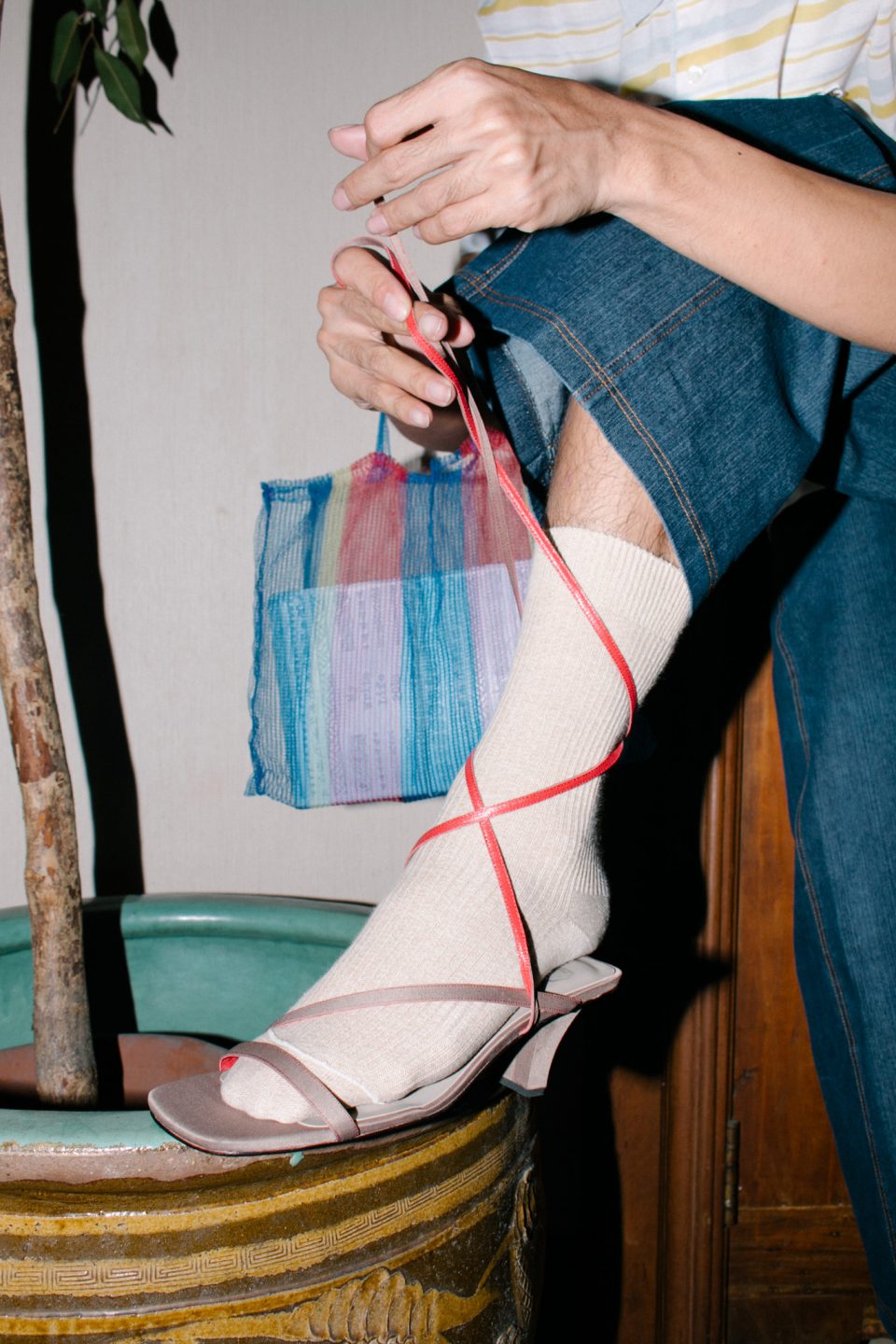 The Fettuccine is one of the three styles derived from the Josanna archive that Anna and Karen updated. Along with these strappy heels, Josanna has the neat Method mule and the intriguing Alat slide with fish leather. These shoes would easily find their way to the women’s rack. Well, the heels are an indomitable icon of femininity. And if men are seen wearing heels today, the heteronormative society might be quick to label them inappropriate as if embracing femininity—or wearing something pretty—is malevolent.
“I know that shoes should not be gendered, but are the shoes you have now technically feminine?” I ask the girls. “I always think about that, but I also think about when [stylist and illustrator] Mano [Gonzales] wore our shoes,” Anna says. “We’re doing high heels and that’s not necessarily gendered.”

That is a fact. But when it comes to heels, gender has always played a role.

Once upon a time, in ancient Persia, soldiers wore heels. These allowed them to gain strong foothold on the stirrups when they mount their horses; hence, they could pour all their might in combat. Soon, the heeled footwear acquired a regal status in Europe. Monarchs like Charles I of England and Louis XIV of France wore these shoes to flaunt their royal privilege—the higher the heels are, the nobler the wearer is. By this time, the 17th century, both men and women are wearing heels but not without gender politics: wider heels belonged to men and the slender ones to women. It was only in 1789 when heels became exclusively feminine. By 1804, when Napoleon was crowned emperor, flats became the new norm for noble men.  Since then, the heels were considered both irrational and feminine. 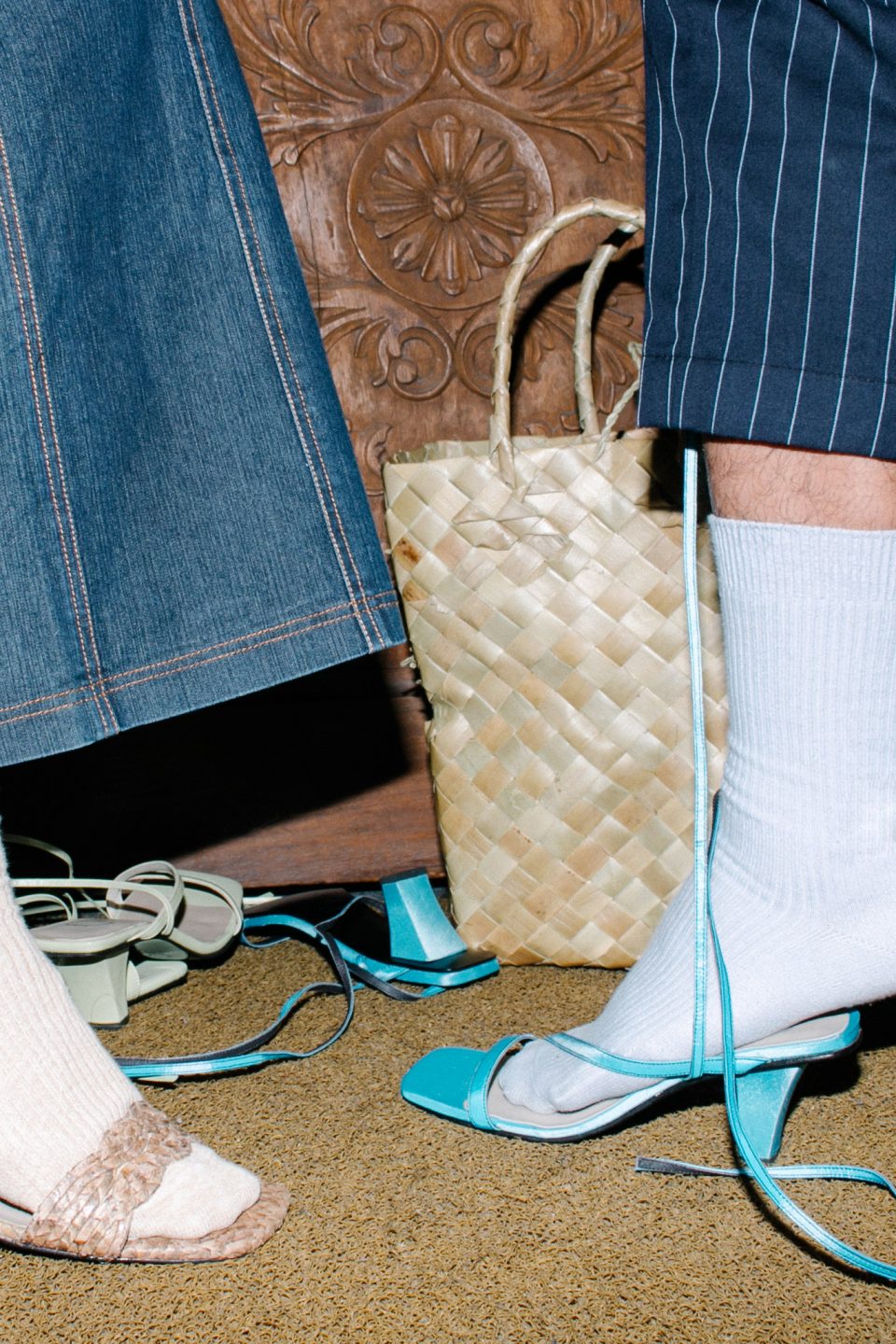 Anna briefly cites this origin story during our discussion. While Josanna isn’t exactly a brand that pushes for the return of heels in men’s closet, Anna and Karen are deliberate in treating their shoes without any gender biases.

“Right now, it comes off as very feminine. But it is the first season; it can gradually work its way,” Karen explains. “Gender in itself is political. If you think of any pair of shoes, dresses, fashion in general—as a suitable and viable choice for everyone—you’re already one step ahead.” 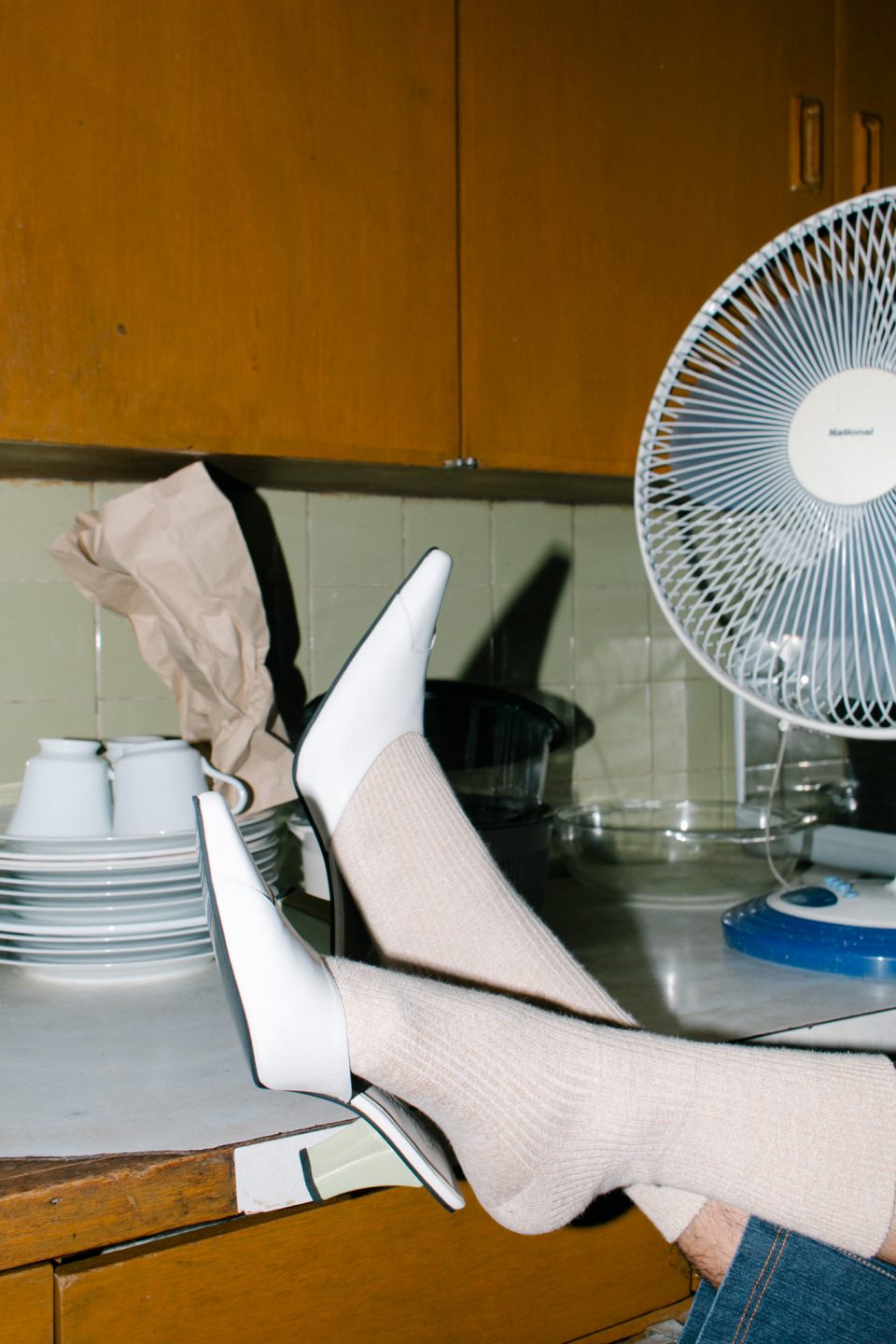 Karen and Anna both worked as fashion editors. As editors, their primary job was to filter through the trends. However, they have a greater responsibility now as makers. “It’s funny because sometimes you feel editors have ultimate power, but I think it’s a recommending power. It has to start with what’s available, with designers and makers, which I guess is what we’re dipping into,” she says.

But ultimately, it returns to the wearer. In a New York Times article titled Letter of Recommendation: Women’s Clothing, the writer Kalle Oskari Mattila writes, “I believe no one is entirely masculine or feminine. As gendered constructs, clothes can constrict us but also liberate us when it comes to that complexity…. To have style is to not let others decide what those possibilities—in gender or presentation—should look like.”

The power of heels

The history of heels tells something about the disparity of sexes, but it’s also a symbol of power and glory. It’s inherent in the architecture of the heels. Although some types are deemed precarious now, the footwear is originally designed to ensure stability. The sole, the heel, and the ground meet in a triangle, allowing the wearer to gain balance. The elevation it comes with gives whoever wears it an imposing stature.

Men may no longer wear heels willingly, but nothing has really changed: The heeled footwear continues to be a symbol of power. And that power belongs to women and the queer community, to individuals whose power is taken away in many occasions. After all, no one struts in heels with shame.

In 1997, the charming Cantopop singer and actor Leslie Cheung emerged on the stage of Hong Kong Coliseum in a shimmering ensemble. His arms folded and his face bore an expression of deep contemplation. Soon, Leslie’s voice softly accompanied the seductive beat. His arms followed with lithe gestures. By the middle of the song, a male dancer joined him in a sensual routine almost reminiscent of the tango scene in Wong Kar Wai’s Happy Together. He was performing “Red,” the title track of his 1996 album.

This is one of Leslie’s most remembered performances. And if there is one memento that made this iconic, it’s the pair of Manolo Blahnik heels he wore.

“He said he had bought two pairs of white satin high heels from Manolo Blahnik in New York just for the concert,” film producer Nansun Shi remembers. “After returning to Hong Kong, he had them dyed red and covered in red sequins.”

Leslie, one of Asia’s first openly gay actors, wore the heels to declare and embrace his identity. In an oppressive society that could have easily negated him, the act of wearing those shoes—Manolo Blahniks, at that—was a glorious display of power. 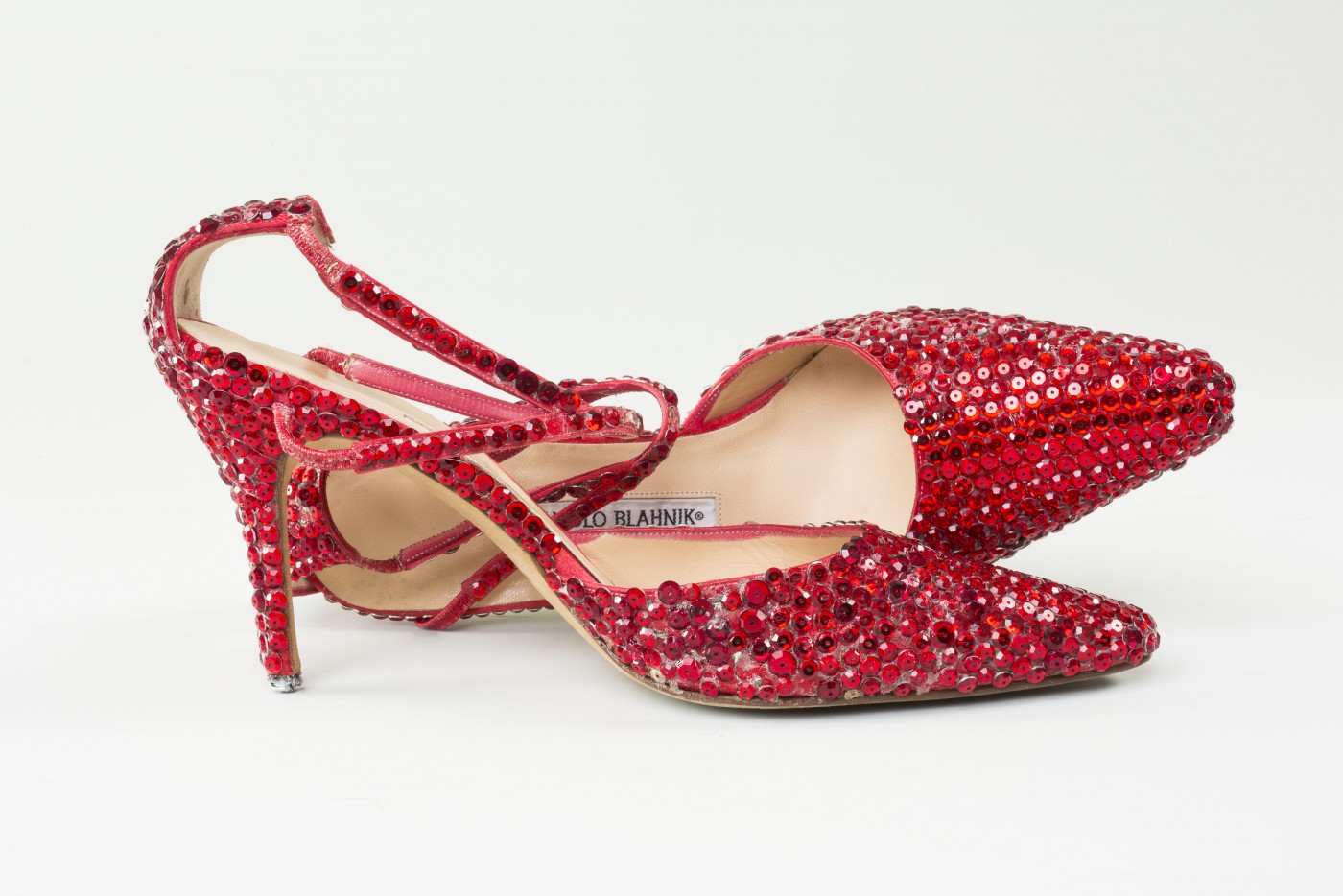 By the end of his performance, he lied down on stage, brandishing the shining red shoes. Then, the dancers around him removed the Manolo Blahniks and replaced them with something more masculine. When he rose, he continued surveying the stage with a feminine groove. The performance defied gender norms. He wore heels not because he could, but because the norms said he couldn’t.

That in itself is power that no one else can take away.

You expect a nice homecoming when you show up back in college after...

SHAREBrand-new president Rodrigo Duterte did promise that we’d get Freedom of Information in...