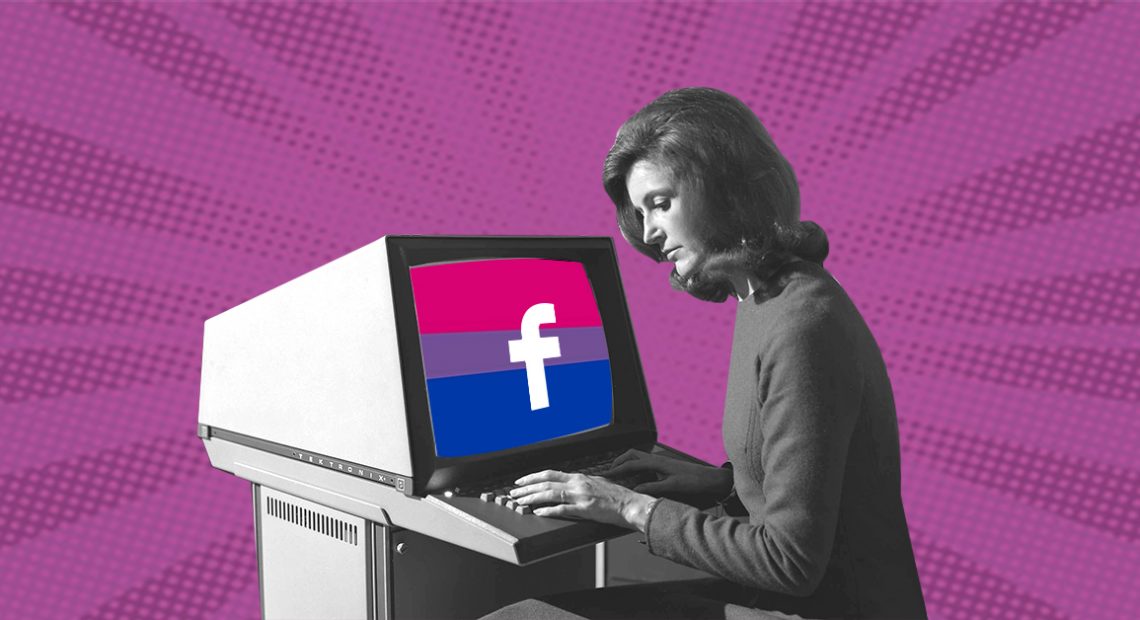 Identifying as bisexual isn’t exactly easy. Bi-erasure has been a rampant practice; not only in media but also in real life. Recent evidence of this in media shows in the rock biopic Bohemian Rhapsody. Pride called out the film for “downplaying Freddie Mercury’s queerness” by tackling the scene where Freddie Mercury came out to his long-term girlfriend Mary Austin.

They dissected a scene where Freddie comes out as bisexual to his longtime girlfriend Mary Austin. “‘I think…I’m bisexual,’ he says quietly. ‘Freddie, you’re gay,’ she explodes. Mary’s bisexual erasure is obnoxiously stereotypical, but not necessarily the most unlikely reaction,” Pride writes.

As a young bisexual, I sometimes don’t feel safe in the general queer safe spaces available to me.

As a young bisexual, I sometimes don’t feel safe within the general queer safe spaces available to me. The first pride I ever went to, I heard a fellow queer activist say these words jokingly in front of thousands of people: “‘Yung mga bisexual diyan, pumili na kayo ng side niyo! ‘Wag na kayong maging indecisive.” I knew this person was kidding, but these words still stung. Invalidation shouldn’t come from the community you’re in, yet it still tends to happen.

In my own perspective, I felt I wasn’t a “legit bi” because of my lack of experience with the same sex. The attraction is definitely there, but I’ve never had hookups or relationships with them. And now that I’m in a committed heterosexual relationship, I feel that it closes the chapter of possibly dating women for good.

I never bother to touch on it except if the thought haunts me during sleepless nights. By avoiding talking about it, I thought I was free from the burden of my insecurities with my sexual identity. Even I’m not that emotionally stable to delude myself to think I’m free from it.

But my perception changed when I joined a bisexual memeposting group on Facebook.

Fandoms, memes, and other absurdities are the core topics of a Facebook shitposting or memeposting group. I’ve joined a couple ever since this social media trend hit the site back in 2016; there’s “Cartoon Frameposting” for animation fans, a witty group for both Rupaul’s Drag Race and Twin Peaks fans called “Fire WERK With Me,” “Bojack Horsememes: WDTK? DTKT? LFO!,” and the latest one I joined called “Is this bi culture?”

Like anyone who joins Facebook groups nowadays, I joined “Is this bi culture?” for kicks and also to satiate my curiosity on what they post about. What they post is literally stated in their group name. Basically, its 23,255 members share memes, screencaps of TV shows, or any other instances in their life that they think are part of bi-culture.

So far, these are the posts I’ve come across with: if Freddie Mercury is the ultimate bicon (a bisexual icon), if refusing to sit ergonomically is bi-culture, if owning a denim jacket with a gray hoodie attached is bi-culture, and if thriving for Rocky Horror Picture Show screams bi-culture (it does for me). But the group doesn’t really exist to claim pieces of pop culture are for bisexuals and bisexuals alone. This group is more of a place where fellow bisexuals can share pop culture references or their own personal experience that other bisexuals can find relatable as well 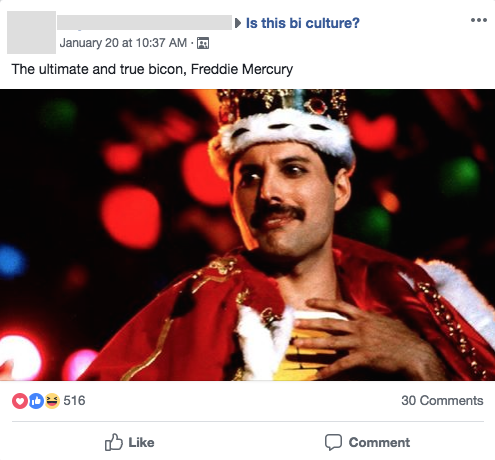 These posts alone made me feel at home. As an edgy pop culture nut, I thrive for discussions like these. The first weeks were really all fun posts for shits and giggles. But then this one huge post popped up, talking about the one topic that left me insecure ever since I came out four years ago. It came from Tina Ford, another fellow member of the group who posed an important question for everyone that day.

The post didn’t start with the group’s signature question that tackles if something is bi-culture. Instead, it started out like this: “Any other bis out there in het-presenting LTR’s (straight long term relationships) who have never had a same-gender relationship, and might not ever?” Reading that one line alone sucker-punched my sexuality’s metaphorical gut. It filled me with familiar feelings of weary, dread, doubt, and of course, insecurity.

Hate comments, jeering, and invalidation are the types of reactions I expected for a fucked up reason that this is what I thought will happen to me if I open it up to others. Upon a shocking twist of events, the 194 comments of this post were filled with fellow bisexuals voicing out the same sentiments of insecurity. The same insecurity that made me feel secretly invalidated ’til now. 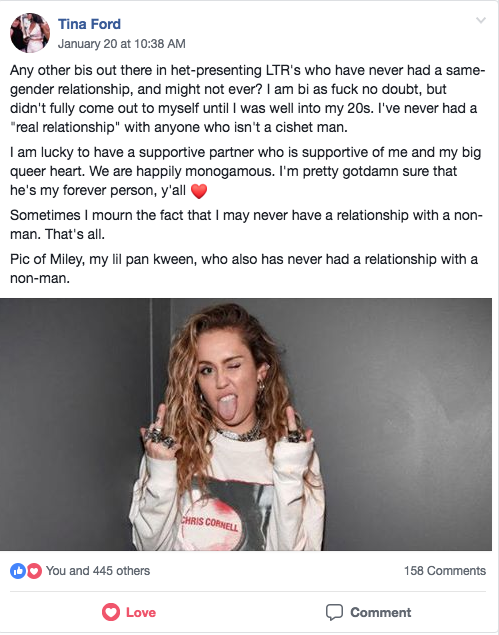 Reading through everyone else’s comments who shared the same sentiment, it prompted me to open up in front of virtual strangers who shared my insecurity. One comment that hit me harder than anyone else’s was this: “i didn’t realize i liked girls as well until my 20s bc my attraction is different depending on the gender and since i was ~raised straight~ i always felt like my attraction to girls wasn’t valid enough.”

I typed out: “i’m so glad this post exists. i thought i was alone on this one. i’m in a serious hetero relationship right now and i think to myself am i not a legit bisexual since the opportunity for me to exercise this has sailed? like, i try not to think about it too much but i doubt myself of my validity as a bisexual when i do. the attraction is like deeeeep in there, but since i’m not exactly dating or going out with other girls, i feel like.. am i not legit?”

The initial thought of airing my insecurity in front of virtual strangers was painful. It didn’t make me feel lifted of the burden, even with these people relating to one another about the same plight I felt throughout these years. The question still echoes, have I been lying to myself all this time?

It turns out that the answer is a big no. The hard truth I’ve been ignoring is that people define themselves. This includes our own sexual and gender expression. No one ever really taught me this. Maybe it’s a lesson I have to pick up along the way as I learn more about myself.

We might pass as a straight person in public at times, but once we reveal our sexuality to someone, the tendency of straight or even fellow queers is to think that we are “half-straight.” We are not though. We like both, sometimes even multiple sexes. No one should ever tell us that we are not who we are. Bisexual people define themselves, just like everyone else.

The most powerful advice that I got from that post wasn’t even a long response from an all-knowing bisexual. It was just one GIF of Laverne Cox, with a pink backdrop behind her, saying these words: “Your feelings are valid, your thoughts are valid.” And that made all the difference.

There’s comfort on venting my insecurities to strangers. At least, this was the case for me. I didn’t expect to deal with these kinds of emotions, with people I’ve never crossed paths with, but talking to people who are coming from the same place as me is assuring. They assured me two things: There’s no chance hell that I’m alone and that talking it out always helps.

Whether you’re a young queer woman of color like me or just a fellow kid navigating the tricky conundrum that is your identity, there’s nothing more powerful than hearing that you’re not alone. Someone saying “you are valid” is the most important thing a young person needs to hear or any person for that matter. Everyone needs a great support system to help them grow.

For me, it turns out my support system exists within strangers in bisexual memeposting Facebook group.

SHAREPart of the magic of Marty McFly’s futuristic Nike kicks from Back to the...

SHAREWe’ve all been there–angsty teenage qualms, unsolicited judgment over perfectly fine things, and...