Last Sunday, two impersonators paid an unexpected visit to Central, Hong Kong. It would sound like a normal weekend afternoon—if these impersonators weren’t playing Duterte and Kim Jong-Un. “It stirs both controversy and praise,” South China Morning Post writes. Well, they are certainly not wrong. Their hangout is kind of weird mixture of funny with a side of “what the fuck.”

Their Sunday is like a filler episode in a slice-of-life serial; they went out to the city square, greeted supporters that may or may not be forced to be happy for these leaders, got some brunch at a Filipino fast food joint, and weirdly went to Church together for mass (even though Kim Jong-Un is devoted to only himself).

“If any drug lords are listening, I might look like him, but I’m not the president. So I will kill you, but don’t kill me,” Cresencio Extreme more known as Fake Duterte back in Pilipinas Got Talent spewed the man’s catchphrases while he was in Hong Kong. This caused OFW Filipinos to mob the two impersonators that afternoon, asking for selfies and cheering on Duterte’s name. That’s very charming, playing safe, and totally not disarming of anyone’s safety. Just like our real president back home. 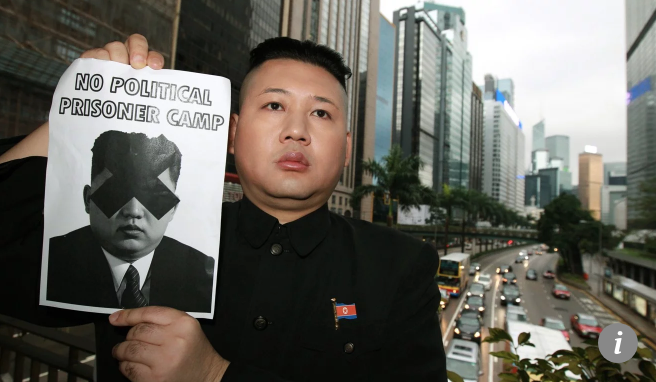 We’re kind of unsure why Cresencio is playing fake Duterte. Is there any pro or an anti-political agenda behind it? It might be for no reason but entertainment. He seems to be visibly uncomfortable saying Duterte’s catchphrases. He shares to the Hong Kong publication how he “used to be afraid of the fact that he looked like Duterte.” But his manager, Howard X more known as fake Kim Jong-Un, is more of a satirical badass.

Howard X has been actively against Kim Jong-Un’s regime through his impersonations. Last 2017, he acted on a Russian rave-pop’s political satire music video where he fucks an atomic bomb. He protests against North Korea’s political prisoner camps. As of recent, he supports the sunglasses company called “Dear Leader,” a company that donates 10 dollars to secret, anti-North Korea organizations to bring down the regime.

Read more: Our President smokes weed “to stay awake.” Sure.

They say: “Imitation is the sincerest form of flattery.” We’re not sure what’s going on here, but it certainly not about flattering these dictators. If anything—these impersonators are making them a laughing stock. And the real dictators are indeed laughing stocks.

SHAREWe keep saying that The SEA Games is a huge clusterfuck. At this...

SHAREMich Cervantes is a 22-year-old interdisciplinary artist who may be familiar for the...