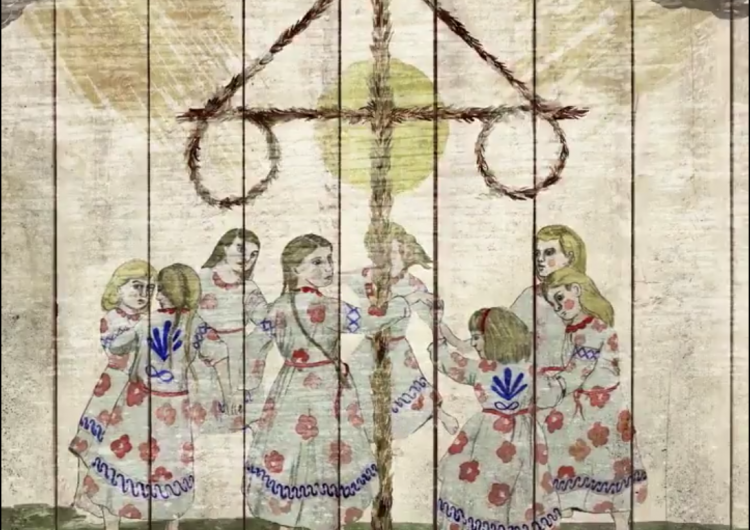 Ari Aster is back after the critical success of his directorial debut effort, Hereditary. His next project is a follow up to the 2018 film, and if its predecessor was any indication, we’re about to witness some freaking good cinema again.

Aster has partnered up with A24 again for the film, and the production company has released a 15-second teaser where we see an animation of a group of girls dancing around a eerie look pole of sorts. Maybe it’s a symbol for some evil Pagan god? Red roses bloom suddenly on the girls’ white dresses. Then, the title—Midsommar, coming out in 2019.

If you aren’t already losing your heads in excitement, the roster of talent might get you there. The cast includes Bandersnatch‘s Will Poulter and The Good Place‘s William Jackson Harper, alongside Florence Pugh, Jack Reynor, Villhelm Blomgren, and Ellora Torchia among others.

In previous interviews, Aster has talked about Midsommar as a “Scandinavian folk horror” that involves a couple’s vacation to a quaint Scandinavian town where a festival is taking place, but of course all goes wrong at the hands of a pagan cult. The director also clued us in that a familial death will set the tone for the movie. “The recent death of the main character’s parents casts a sense of dread over the proceedings,” says Film Comment on their interview last year with the director.

It’s a pretty creepy teaser and, okay, we’re very much intrigued. But really, all we needed to know was that Ari Aster and A24 are working on a horror film again to pay attention. Hereditary was one of the standout horror movies of 2018. Scratch that, it was one of the standout, and in my opinion, also one of the most robbed movies of any genre in 2018. (Hear that, awarding bodies? I said what I said.). So hopefully this new endeavor will be just as good, if not scarier.

SHARETrigger warning: Mentions of suicide and self-harm If there’s an act or mention...