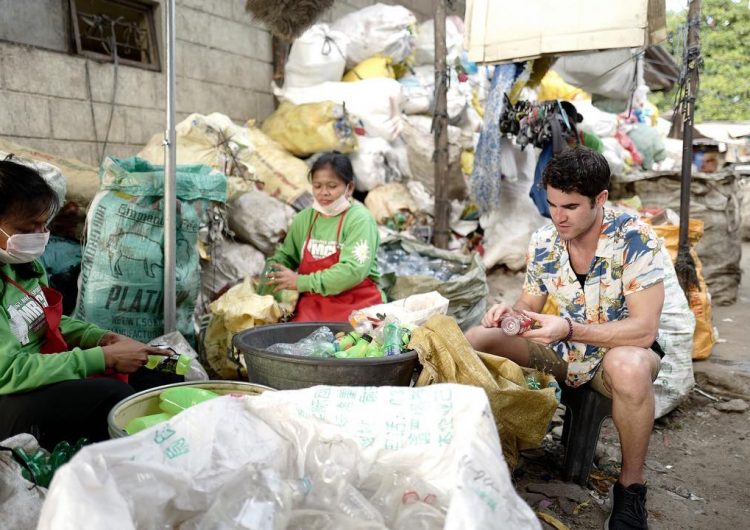 In an alternate universe where Nadine Lustre is president, environmental concerns are the government’s top priority. And in that universe, Darren Criss, the award-winning actor known for his roles in Glee and The Assassination of Gianni Versace, is the mayor who implements zero waste programs in his district. That is just an imaginary universe, though. In the real world, celebrities like Nadine and Darren don’t need to be elected as public officials to raise awareness about these issues. Their existing platforms are enough for them to call for change.

Darren visited the Philippines earlier this month for a brief vacation. Instead of flooding his Instagram feed with glamorous photos, he opted to post just one photo from his Palawan trip and dedicated a space for his advocacy. Just yesterday, he shared a photo of him segregating trash. The caption reveals that he visited Philippines to understand Metro Manila’s waste and sustainability challenges.

“Yeah, I know, it’s not a very sexy topic,” his caption reads, “but that’s exactly why it’s such a massive issue in so many parts of the world.”

Do we still need to elaborate on that? Perhaps we should.

In his Global Citizen petition page, Darren reveals that there are eight million tons of plastic that goes into the ocean every year. And here’s something we should be ashamed of, the Philippines is one of the biggest contributors to plastic pollution in the ocean.

In Metro Manila alone, the garbage crisis has worsened last year. The Metropolitan Manila Development Authority (MMDA) estimated that there were about 1,200 to 1,500 truckloads of trash collected every day in 2018. In another report by Global Alliance for Incinerator Alternatives (GAIA), there are approximately 163 million sachets thrown away daily. We could go on and spew more data, but those numbers are enough to make us cringe and worry. As Darren says, “the obstacles [we] face are still overwhelming.”

So let’s talk about waste management. Yeah, I know, it’s not a very sexy topic- but that’s exactly why it’s such a massive issue in so many parts of the world. So I decided to take a trip to the Philippines, a country close to my heart, with my friends from @glblctzn to learn specifically about metro Manila’s waste and sustainability challenges. I met a lot of inspiring people who have made incredible strides towards creating a cleaner, greener future, but the obstacles they face are still overwhelming. I’m urging mayors in the Philippines to implement zero waste programs in their cities in partnership with their communities. A huge thanks to Mayor @lenlenoreta, who I met just last week, for committing already- now we need more Mayors to do the same. Join me and take action. (link in bio) Mabuhay!

In his post, Darren encourages Philippine mayors to implement community-based waste management programs. Considering that we have a law like “Ecological Solid Waste Management Act of 2000” or Republic Act 9003, waste management should have already been a top priority. But it still shows that many cities don’t comply.

Read also: We stan these 8 celebs who care about the Earth

Darren applauds Malabon Mayor Len Len Oreta for being one of the mayors who has already committed to implementing waste management programs. “Now we need more mayors to do the same,” he writes.

Although Darren calls mayors to take action, he also encourages citizens to be mindful of their consumption. If our leaders can’t implement waste management laws, then let’s initiate the change. Darren himself has committed to reducing his plastic usage. “The plastic problem is enormous, but there are solutions—and it is urgent that we take steps now, together,” the petition reads.

Now that we’re also electing our new leaders soon, maybe it’s high time that we take a look at where they stand when it comes to environmental issues. We don’t need someone who shows apathy towards these concerns.

SHARE2020 is filled with a lot of crossovers and plot twists. This week,...