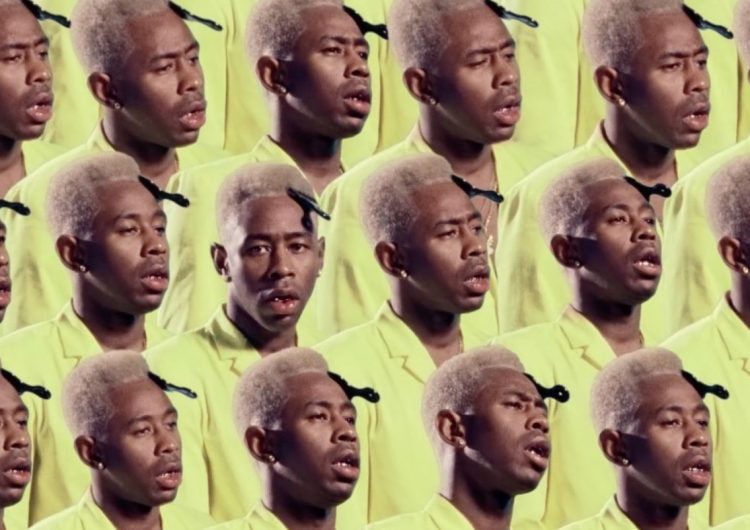 Heads up! Tyler, The Creator announced that his album is officially dropping on May 17, and also released two cover designs to boot.

Prior to the announcement, HypeBeast had been snooping around and found official records of Sony’s financial statements, which reveal that in a Noteworthy Projects section, a Tyler, The Creator project is accounted for by the end of June. Other names include Mark Ronson, Calvin Harris, and Bruce Springsteen. The titles for all these artists’ projects are still marked with a T.B.D., but at least we have a (vague) date to look forward to.

We got a little taste of the new album with Tyler’s new social media post. The rapper posted a 50-second clip of him—well, 18 copies of him—standing slack-jawed while a thick, buzzy synth note plays. One of the copies then looks towards the camera and a drum beat starts, and the Tyler copy starts bobbing his head. Then, cut to black. “He’s coming,” a voice sings as the instrumental continues. If this teaser tells us anything, it’s that Tyler’s trading in his honey-sweet Flower Boy sound for something grittier.

To add to the hype, the comments section is filled with comments from Solange, A$AP Rocky, Kali Uchis (of course), and more talking about how it’s “go time.” Tyler has been known to release projects every two years, and his last album came out in 2017. It’s about time for a new one this year.

Just to add our conspiracy theories, could the 18 Tyler copies mean anything? Like 18 tracks perhaps? Hopefully, it’s that amount or more. We’re down for as much Tyler creations as possible.

SHAREAMC has been taking fans on a seven-year emotional and psychological post-apocalyptic rollercoaster...

SHAREAstronomers confirm that a baby planet is forming in the dust swirling around...