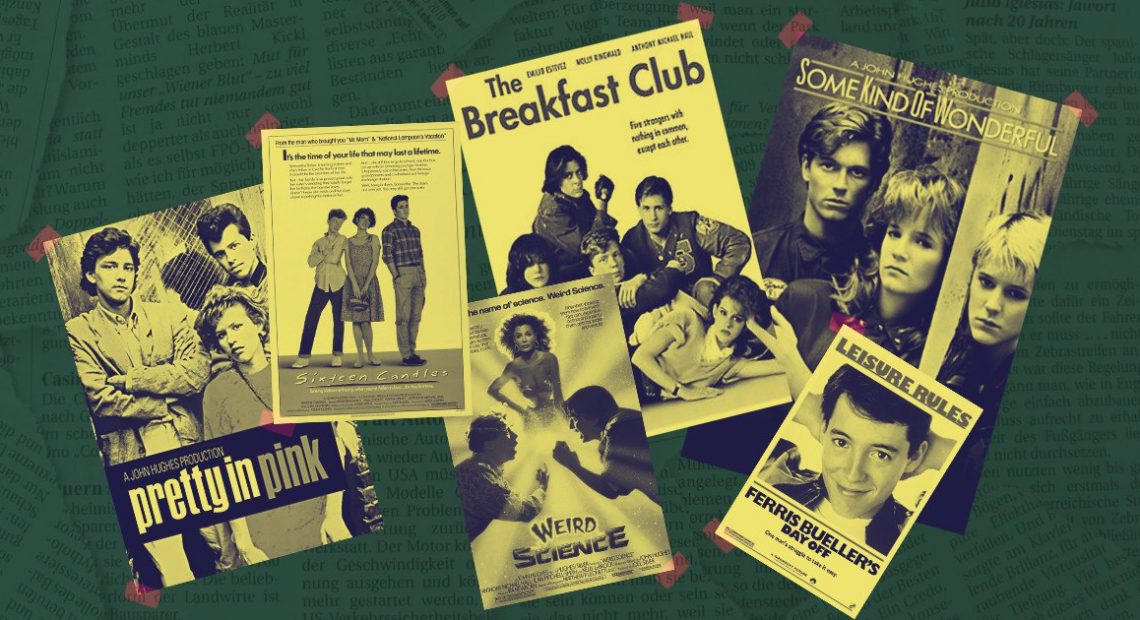 I was so excited to watch The Breakfast Club. It’s the Ultimate High School Movie™, right? Well, I have to admit that it shocked me—not in a good way. For sure, the brilliantly scripted insight from “the criminal, the athlete, the basket case, the princess, and the brain” was a highlight. But the treatment of Claire and Allison, the film’s two female characters, turned me off. After being fleshed out so deeply, both their arcs abruptly come to an end in the arms of guys (who were never good to them before).

The Breakfast Club isn’t the only one of John Hughes’ ’80s teen films that raises eyebrows three decades later. Weird Science’s premise has a woman as an object, while Sixteen Candles pays zero attention to consent. I am cringing. No way would these aspects fly today. (In recent years, even the actors themselves have called them out!)

After all, it’s a new #MeToo era, and we’re a new generation that’s not blinded by nostalgia. Hughes’ films may have set the standard for the high school genre, but the legacy of classics can change. Here they are reexamined, from least to most problematic.

In case you haven’t seen them yet, this is the necessary spoiler warning.

TL;DW: Outsider Keith is oblivious to the affections of his best friend Watts and begins a relationship with popular girl Amanda in spite of their social and class difference.

Quick review: The head-scratching plot seems very contrived (which makes sense considering that this exists to put a twist on Pretty in Pink), but never mind that. The good old-fashioned puppy love is enough to warm your cold heart. Hopeless romantics would be pleased.

Questionable content: A female student flirts her way out of detention with a male teacher. Otherwise this movie is pretty light.

Lesson learned: Being single and independent beats sacrificing your integrity for a relationship. What you’re looking for might actually be right there beside you (literally)

TL;DW: Even though Blane is a dream, dating the uncharacteristically nice rich kid isn’t so easy for working-class girl Andy, who has to manage the budding relationship alongside outsider syndrome, an incompetent father, and her best friend’s affection.

Quick review: This is a cute teenage romance that’ll make you feel all warm and fuzzy. Yay for supportive boy-girl friendships and father-daughter bonds!

Questionable content: None, really. It does counter the male entitlement prominently featured in Sixteen Candles.

Lesson learned: You aren’t owed reciprocated feelings even if you’re a nice guy in love. Don’t force it. The friendzone isn’t that bad a place.

TL;DW: The student body’s idol and the principal’s worst nightmare, Ferris Bueller bamboozles his way on a truant adventure with his chill girlfriend and uptight best friend.

Questionable content: A guy admits to watching a girl change, and she shrugs it off (?). There’s an apparent suicide attempt at one point, although the character’s mental health struggles aren’t exploited for laughs.

Lesson learned: Skipping school isn’t something to be encouraged, but Ferris provides a good reminder to seize the day because life is short!

TL;DW: Nerds Gary and Wyatt have no chance with the girls at school, so through some mysterious computer wizardry they create Lisa, a smart, sexy superwoman who possesses the confidence and cool they lack.

Quick review: This film may be about smart kids, but it’s devoid of the intelligence and vulnerability that Hughes was famous for—it’s an outlier clearly catered to an immature male audience. The nerds’ goofiness could still get a couple laughs, and at least there’s young Robert Downey, Jr.!

Read more: ‘All That’ is back with the Jonas Brothers as their guest stars

Questionable content: A LOT of female objectification. The main characters’ obsession with scoring chicks pretty much drives their actions; Lisa is personalized to their specifications all the way down to breast size. Drunk Gary impersonates a black man’s speech.

Lesson learned: Geeks aren’t hopeless? Your seemingly perfect solution may take a life of its own? As people-pleasing trumps thematic depth in this movie, the messages get a little lost.

TL;DW: In Saturday detention, five high school archetypes bond over a hatred for the principal and disdain for the lives they feel trapped in.

Quick review: Shrewd, raw, and touching, this strongly acted flick has been proclaimed as a cultural achievement worthy to be preserved in the United States National Film Registry—although some parts don’t come off as romantic as they used to.

Questionable content: The mean guy sexually harasses the popular girl throughout the movie and even makes her cry. Then they get together at the end of the day. Seriously? Plus, the jock and the weirdo fall in love immediately after her signature frumpy-goth look is erased.

TL;DW: Sam’s sixteenth birthday is looking like the worst: her family forgot about it, the geek’s who’s crushing on her won’t leave her alone, and she is head over heels in love with the dreamboat Jake Ryan.

Quick review: It’s easy to sympathize with Andy’s scenario and Molly Ringwald’s performance, so if you can ignore the logical fallacies (the hot senior will go for the innocent sophomore crushing on him despite them barely knowing each other) and disturbing elements (see below), you could find the sweetness in this teenage fantasy.

Lesson learned: The wild prom queen doesn’t deserve basic respect. It’s okay if the handsome leading man uses women and ditches his girlfriend because he fulfills the every girl’s longing (which can surely come true if you wish hard enough!). Obviously, that’s not a good lesson.

What’s a “vent buddy” and where do we get one?