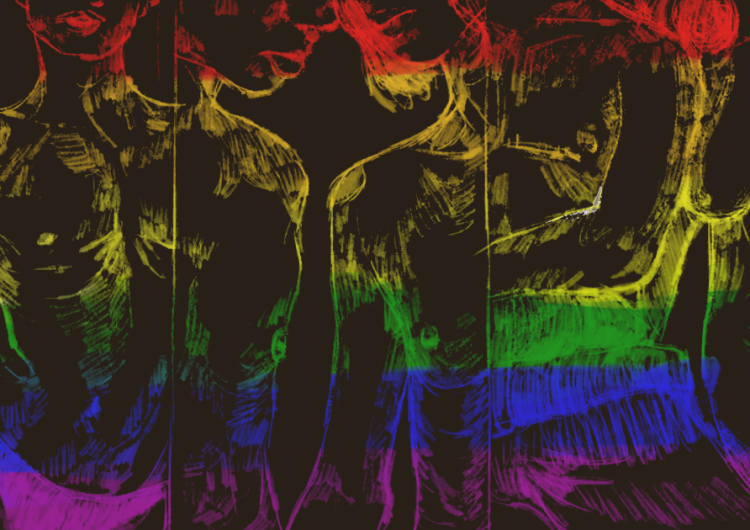 We were raised to conform to a gender binary. Hence: our limited understanding of  sexual and gender expression (SOGIE). It’s always been Adan at Eba from kindergarten onwards.

Surprisingly, our ancestors never thought of sex or gender as binary. In the trans guidebook Euphoria, pre-colonial Philippines valued gender equality. Filipino men marry each other, babaylans are our first genderfluid ancestors, and we lived in a matriarchy.

Most of us don’t know about our country’s rich queer history, thanks to our non-existent SOGIE bill (great job, Congress) and historical amnesia. Still, it’s better late than never to get ourselves educated on the sex and gender spectrum—especially this Pride Month.

As of 2016, Australia’s Sex Survey discovered Australians use 33 terms for gender. We have a lot to catch up on. The plus in LGBTQ+ grows and grows. Learning the ABCs of LGBTQ+ is the first step to unlearning gender binary bias.

Learning the ABCs of LGBTQ+ is the first step to unlearning gender binary bias.

Sexual orientation and gender identity aren’t synonymous. Regardless of what we’re taught, our genitalia doesn’t dictate who we are and who we’re allowed to love. Gay & Lesbian Alliance Against Defamation (GLAAD) defines sexual orientation as “a person’s enduring physical, romantic, and/or emotional attraction to another person,” while gender identity is “a person’s internal, deeply held sense of their gender.”

They proceed to inform readers “internal gender identity does not match the sex they were assigned at birth.” At times, gender isn’t limited to him and her. Some people drop gender altogether, while others see it more as a malleable thing.

The ABCs of LGBTQ+

The use of LBGT as an acronym began in 1988. According to Pink News, it grew from LGB to LGBT around the late ’80s to early ’90s. “It had rather a lot of letters added to it over the years,” they report. They’re not kidding at all.

Let’s learn what LGBTQ means and its ever expanding plus sign. Of course, keep in mind this friendly reminder from OK2BMe: “This initialism and the various terms are always evolving so don’t try to memorize the list. The most important thing is to be respectful and use the terms that people prefer.”

Read more: A label for lacking: what being asexual is like

Agender: Someone who doesn’t identify as any gender. According to OK2BME, this “includes a very broad range of identities which do not conform to traditional gender norms.”

Ally: A heterosexual, cisgendered person who considers themselves friends of the LGBTQ+ community.

Asexual: A person who lacks sexual attraction to anyone, or has little to no interest on sexual activity.

Bigender: A person moving between feminine and masculine gender identities and behaviors, possibly depending on context.

“The most important thing is to be respectful and use the terms that people prefer.”

Bisexual: A romantic or sexual attraction or sexual behavior towards both men and women, or any people of any sex or gender identity.

Gay: Refers to a homosexual person. Gay is often used to describe homosexual males but lesbians may also be referred to as gay.

Gender Queer: Someone who identifies beyond the gender binary and cisnormativity.

Gender Variant: A gender expression where the individual goes beyond male and female gender norms. Some people who are intersex or transgender may also exhibit this expression.

Intersex: This means someone who has a variation of chromosomes, gonads, or genitals that doesn’t make them strictly male or female.

Lesbian: Cisgender women who experience love or sexual attraction to other women.

Pangender: This is a person who believes they are all genders. Overlapping with genderqueer, how a person presents themselves and their pronoun usage varies, depending on the person’s choice.

Pansexual:  Also known as omnisexuality, is attraction or love toward people of any sex or gender. They see gender or sex as an insignificant factor in relationships, whether romantic or sexual.

Queer: This is an umbrella term for people who aren’t heterosexual or cisgendered. It began as a derogatory term, but around the late 1980s, queer scholars and activists reclaimed the term.

Questioning: Someone who’s uncertain or is still trying to explore their gender or sexuality.

Transgender: Refers to people whose gender identity is not associated with the sex they were assigned at birth.

Two-Spirit: Originating from Native Americans, this describes gender-variant individuals within indigenous communities who have both male and female spirits.

The future is queer; Gen Z is officially the gayest generation ever, musicians like Miley Cyrus and Harry Styles are no longer just allies, and in GLAAD’s 2018 TV diversity report “queer people of color outnumber their white counterparts on TV.” But we’re also living in a time when our country’s SOGIE bill failed to pass, where Jennifer Laude’s death isn’t the last trans-related violence, and LGBTQ+ people are denied entry in some public spaces.

So why is it important we learn our ABCs of LGBTQ+? It’s to ensure the safety of an unfairly discriminated community, to know what “identity” truly needs, and to acknowledge our privilege that not a lot of people have right now.

SHAREIt’s kind of unsettling to think that every idea we can conceive isn’t...

SHARELet’s face it, most of us dread the impending series of family reunions...