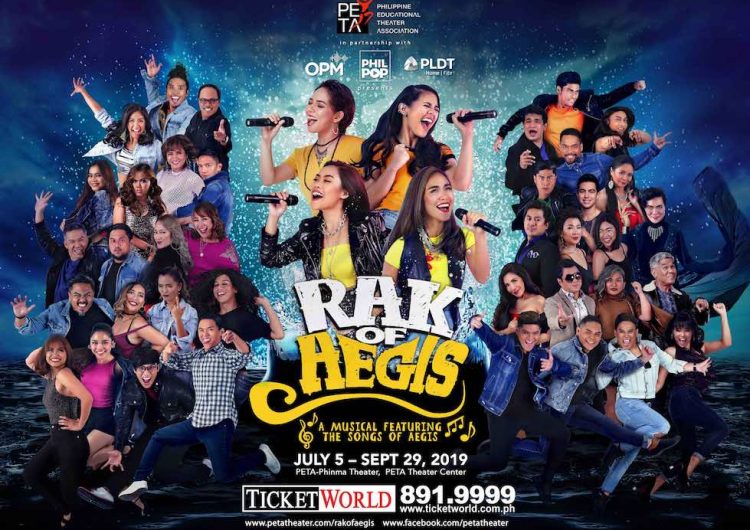 “Heto ako, basang-basa sa ulan. Walang masisilungan, walang malalapitan.” It’s the right time to belt out that line from the famous Aegis karaoke favorite. The Philippine Atmospheric, Geophysical and Astronomical Services Administration (PAGASA) hasn’t officially declared the start of the rainy season yet, but the clouds have begun to show signs that it’s starting soon. his means we’ll keep our eyes peeled for class suspension announcements. The return of Philippine Educational Theater Association’s (PETA) Rak of Aegis is particularly timely, just in time for monsoon season

Now on its seventh run, Rak of Aegis is a musical set in the fictional perpetually flooded Villa Venezia. As someone from Malabon, that reminds me of our very own Artex compound. It’s centered on the story of Aileen, a Venezia resident who seeks fame in order to help her family. But what makes this musical a treat for lovers is the new life it gave to Aegis’ discography. But beyond that, the discography of the band Aegis is what makes this musical a treat for OPM lovers.

Rak of Aegis, which premiered in 2014, is currently the longest-running OPM musical with over 300 shows to date plus the upcoming 70 shows this season. It’s also one of the most celebrated jukebox musicals in contemporary theater. Who wouldn’t love a musical that revolves around Aegis?

For this run, old cast members including Aicelle Santos (fresh from her stint in Miss Saigon), Isay Alvarez-Seña, Robert Seña, Kakai Bautista, among others are reprising their roles. This latest run will also bring new faces on the Rak of Aegis stage including Noel Cabangon, Randy Santiago, and Derrick Monasterio. Like the previous runs, the cast members of the musical will be walking around the set in Maco Custodios. Don’t worry, they’re made for the rain.

Rak of Aegis will run from Jul 5 to Sept 29 at Peta Theater Center, 5 Eymard Dr., New Manila, Quezon City. Get your tickets here.

SHAREOpen online courses are a gift to humanity, with quality education now made...