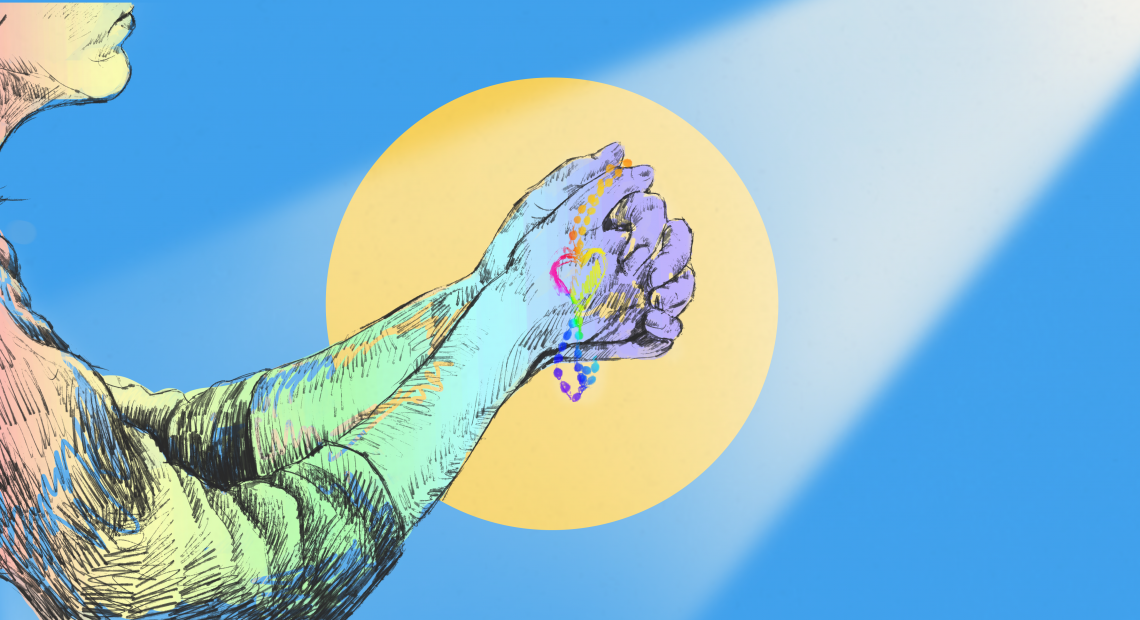 This is the first of a two-part story about being queer in the Christian community. In a community where queerness is condemned, how do LGBTQ+ Christians find the middle ground between their sexuality and their faith?

In an online correspondence, Jean* drew a card for me from her tarot deck. The card was an inverted eight of swords. She told me I had to remove my blindfold to see beyond the situation I’m in. “That’s the fault of the woman in the card,” she said. “Her legs are free to run but she chooses to stay. Not everyone may support you, but [taking off your blindfold] is necessary for your freedom.”

But if I had come to Jean for advice years ago, she would have not touched the tarot deck—it’s not something her previous church would approve of. Instead, she would have laid her hand on my shoulder, telling me to cast my burdens unto Jesus.

Jean, who is 23 years old now, used to be an active member of an evangelical church. In fact, she wasn’t only satisfied with her salvation. She even led Bible studies, nurturing the souls and spirits of her fellow young Christians. That was until 2015 when she came out as lesbian and her church caught wind of it.

Jean and other LGBTQ+ members of the church who mustered the courage to come out were subjected to what seems like conversion therapy. “They treated us more as a project or as people that need to be ‘straightened,’” she says.

They were compelled to answer questions about their personal history. With queries about abuses, childhood environment, and sexual encounters, the questionnaire seemed to insinuate that queerness was a result of trauma or abuse. Then, they had to undergo fasting. “Fasting is considered a way for Christians to be more sensitive to God’s voice,” Jean explains. The “dreaded ‘casting out of demons’” is the final procedure. Jean says it’s just a prayer rebuking negative spiritual manifestations. To a degree, it sounds like a ceremony of exorcism. “It’s part of the process because homosexuality is deemed a greater sin, unlike any other sins out there,” she says.

“I left the church when I saw that I was trying so hard to fit in,” Jean says. “A lot of people cut me out of their lives despite my efforts to try to be the same Christian person for them.”

In an article from The New York Times, the author Julie Rodgers, who used to be part of an organization that promoted conversion therapy, writes that people who underwent conversion therapy don’t become straight. “If you listen to their testimony, they say they decided to ‘find their identity in Christ ‘rather than in their sexuality,’” the article reads. Although most of them try to live according to the standards of the church, “very few in the videos say their attractions changed.”

Jean stayed in church. She went through a few counseling sessions where her youth leaders monitored her sexual orientation. But within that same year, she left her church and stopped considering herself a Christian.

“I left the church when I saw that I was trying so hard to fit in,” she says. “A lot of people cut me out of their lives despite my efforts to try to be the same Christian person for them.”

Jean’s narrative isn’t unheard of. In his memoir Boy Erased, Garrard Conley revealed the damages incurred by intensive conversion therapy. Renowned gay Christian activist Matthew Vines, on the other hand, was forced to leave his congregation after trying to reconcile homosexuality with Christianity. It’s an all too familiar story that has sparked debates between conservative Christians and LGBTQ+ Christians, but the general Christian view hasn’t really changed. Queers are cursed and will burn in Hell, while good, faithful Christians will inherit the Kingdom of God.

Back at Jean’s previous congregation, the leaders of the church considered LGBTQ+ individuals sinful and lost. Thus, they need Jesus to save them. But somewhere between the hatred and condemnation, there is a minute space where homosexuality and Christianity intersect in harmony. “I’ve been told being gay is alright [as long as you] don’t act on it,” Jean recalls.

Arthur*, a gay Catholic, had also heard about this condition.

Although his diocese is conservative, he says it’s not openly hostile towards LGBTQ+ individuals. Still, Arthur, 28, prefers not to reveal his sexuality to his church as it may only prompt unnecessary discussions.

“They prefer that those with homosexual tendencies remain chaste and quiet about it,” he says. “It would not be far-fetched that some saints were inherently LGBTQ+.”

The concept of chastity or celibacy is an integral part of the Christian life. In Catholicism, those who wish to be members of the clergy are required to take the vow of celibacy. In 2018, Pope Francis stressed that those with “homosexual tendencies” should not be allowed to join the Catholic clergy. He also urged gay priests to resist carnal temptations—or leave the clergy—so as not to cause a scandal.

Chastity is also a middle ground that allows Arthur to practice his faith and acknowledge his sexuality at the same time.

“Sometimes I wish I was straight so it would be easier, but here I am. Maybe it is the cross I bear,” he says. And even if he were straight, Arthur would still opt to abstain from sex.

“To impose that selfish and bigoted rule on its followers is very disappointing most especially that the idea comes from a group that supposedly promotes unconditional love.”

Jessie, proudly gay and Catholic, is also familiar with this condition of abstinence, but the 26-year-old considers it bigotry.

“While they claim to be accepting when it comes to the LGBTQ+ community, that ‘acceptance’ comes with a number of conditions. For instance, they believe that it’s alright for a person to be gay as long as he or she doesn’t engage in sexual activities regardless if it’s done in the context of love,” he says. “To impose that selfish and bigoted rule on its followers is very disappointing most especially that the idea comes from a group that supposedly promotes unconditional love.”

“I tend to feel a great amount of frustration when they take steps to suppress and invalidate campaigns that ought to promote equality and inclusivity.”

Beyond the condition of chastity, Jessie resents how the Catholic Church views the LGBTQ+ community negatively.

“There would be Sundays when the homily would be about homosexuality. Everything else that comes along with it is deemed immoral by the Church, especially when it comes to being effeminate and engaging in homosexual relationships,” he says. “I tend to feel a great amount of frustration when they take steps to suppress and invalidate campaigns that ought to promote equality and inclusivity.”

Although Pope Francis said words of compassion towards the LGBTQ+ community, the Church generally views the community negatively. In a recent document from the Vatican, the Church rejected the idea of gender fluidity. It concludes that gender fluidity is “nothing more than a confused concept of freedom in the realm of feelings and wants.”

Despite the hurtful words they occasionally hear in Sunday mass, Arthur and Jessie never had the urge to depart their respective churches. Both of them were raised in religious families and Catholic schools, and their faith is deeply embedded in their culture.

“It has always given me comfort and a sense of moral direction,” Jessie says. Arthur admits he cannot imagine life without practicing his faith.

“I choose to build a stronger and more personal relationship with my God than that of the Church.”

So, how do they merge their faith and sexuality?

For Jessie and Arthur, their relationship with God is beyond the confines of an organization, which, as Jessie says, “tends to be flawed and prone to politics and corruption.” They view their faith as a supplement to their gender identity. Instead of antagonizing each other, faith and their gender identity inform each other without conflict.

“I choose to build a stronger and more personal relationship with my God than that of the Church,” Jessie says. “By actively practicing my faith, I also build better relations with my family as well as those who share the same beliefs and values I have.”

“God is not just a god who shows himself only to those who congregate every Sunday, but also to every individual who is willing to spread love and joy towards others.”

This is also how Jean has come to terms with her expression of faith. Four years since she stopped considering herself a Christian, Jean still believes in God. She still reads the Bible, but she doesn’t find the need to be part of a congregation. She is part of a feminist Bible study group that has a progressive perspective on social issues and the gray areas of the Bible.

“I personally do not think you need a whole church to learn and practice faith,” Jean says. “God is not just a god who shows himself only to those who congregate every Sunday, but also to every individual who is willing to spread love and joy towards others.”

*Name has been changed upon request.

Is “NFT” just a fancy way of saying “art theft”?

SHAREMay 3rd is a big day for our local label Buwabuwan collective as...

SHAREBy Celene Sakurako To celebrate the two year anniversary of the release of...