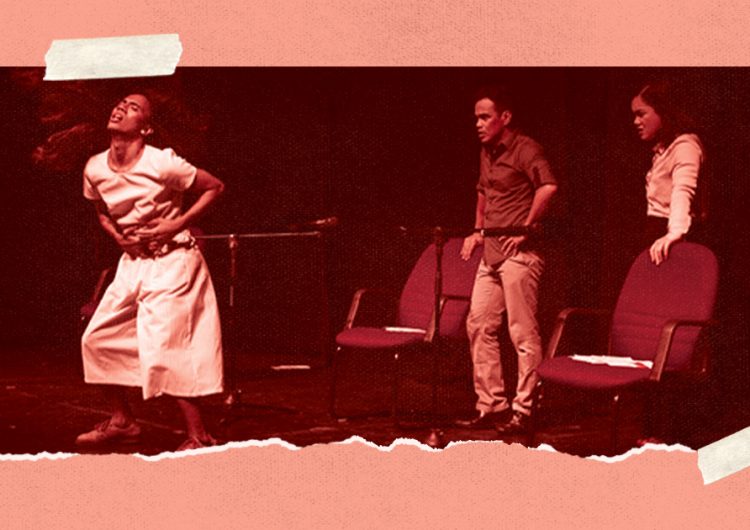 Three years have passed since Rodrigo Duterte assumed the Presidency. In those three years, aside from his “friendship” with China, one of Duterte’s most infamous initiatives is the bloody war on drugs. Three years and 6,600 deaths later, the drug war, which Duterte intended to finish in the first six months of his term, still continues. This war on drugs is what fuels Pineapple Lab’s latest offering.

Presented by non-profit theater company People of Interest, A&Q is a theater piece looking into the biggest issues in the country based on interviews. Filipino-American director Jesca Prudencio first introduced A&Q as a workshop production in UP Diliman two years ago. Its staging at Pineapple Lab on Jul. 12 is its official world premiere.

“As a Filipino American artist, it has been my mission and passion to give a platform for Filipino voices to understand what is happening in the Philippines right now from the people who are living it. POI’s mission is to humanize issues and I am thrilled to be premiering this deeply complex theater piece at the artistic safe haven that is Pineapple Lab,” she says.

But with all the movies, songs, and other materials criticizing the drug war, what makes A&Q special? Well, it’s a documentary-devised theater piece. This means the piece is developed through hours of interviews with families of the victims, activists, community leaders, and former drug dependents.

The show itself uses taps various forms of performance like karaoke, zumba, and even beauty contests to tackle the issues of the drug war. “This is not a political piece, but rather a documentary piece made to educate, engage, and spark curiosity around the humanity of the community interviewed,” Pineapple Lab clarifies.

With the support of San Diego State University, A&Q features Bong Cabrera, Bunny Cadag, and Opaline Santos, with projection design by Justin Humphres, sound design by Arvey Dimaculangan, and dramaturgy by Mark B. Mirando.
You can catch A&Q on Jul. 12 and 13, 8 p.m. at Pineapple Lab. Get your tickets at [email protected]