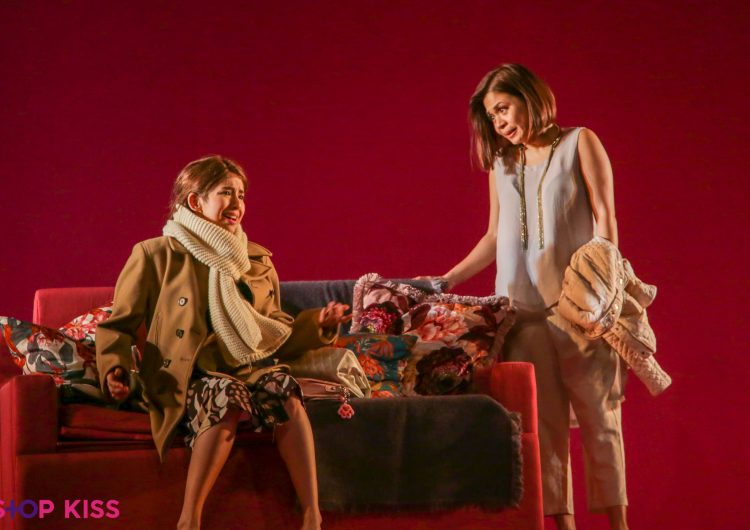 We’re not living in a post-homophobic society. By now, it’s hard to delude ourselves that everyone can co-exist. Things like straight pride exists, homophobic and transphobic slurs are excused by “freedom of speech,” and instead of queer rights here in the Philippines—we’re given membership cards instead.

These facts are hard pills to swallow. And in Ed Lacson Jr.’s take on Stop Kiss, he made sure to shed light on this painful reality by reeling us in Sara and Callie’s lives. It’s funny, poignant, romantic, and an overall tear-jerker. 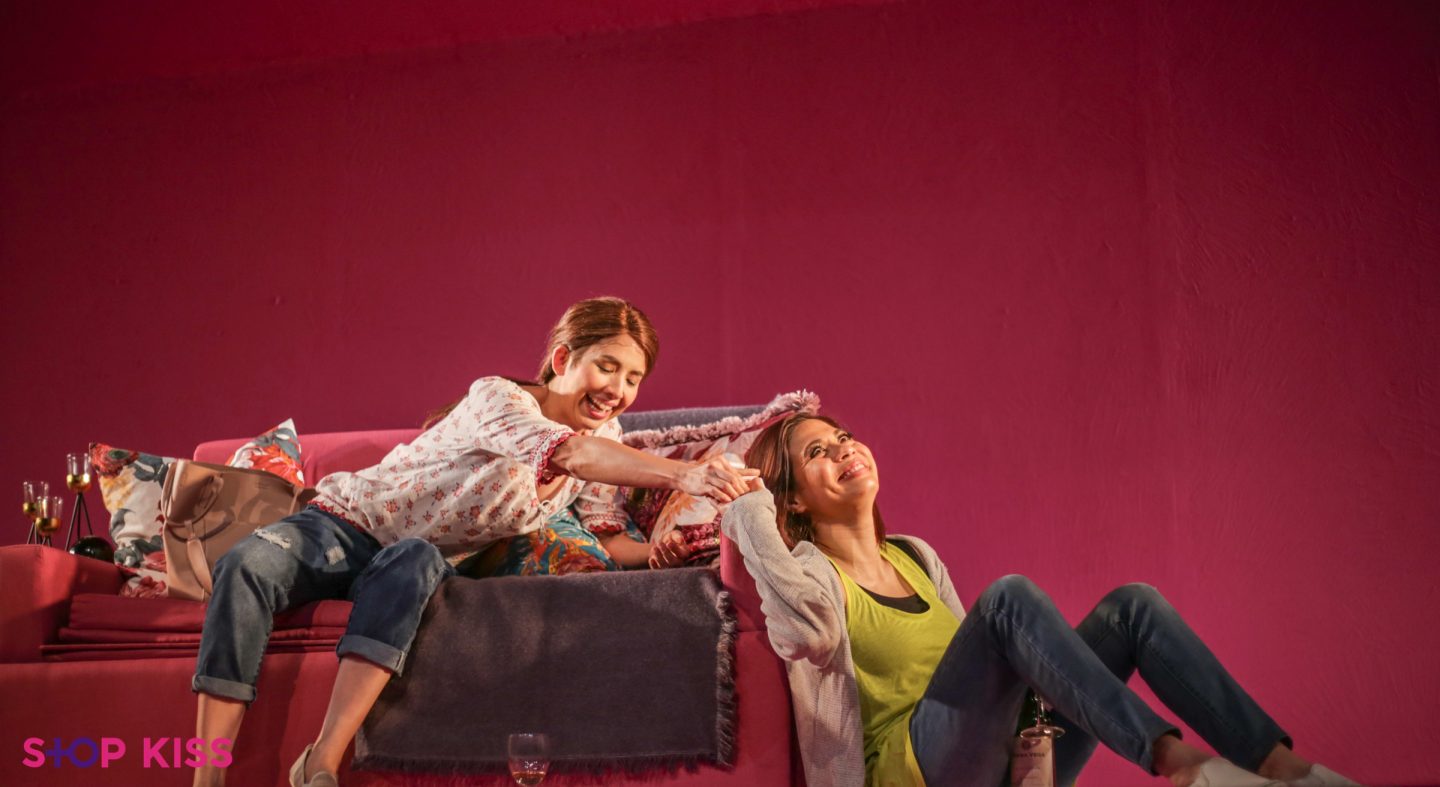 But when we went to the premiere, we were a clean slate.We barely knew anything about the plot, didn’t look for spoilers, and just knew it as an LGBTQ+-centric tale. This both excited us since I am an emotionally constipated bisexual, while Jelou is a sucker for a good romance story (though, her Scorpio-self won’t admit it).

So of course after watching it, both of us were an emotional mess. It’s safe to say that we both like it. While recovering from the play’s heavy motifs, we just ended up staring at the crowd, wondering how to talk about this play that gave my heart a suplex.

We figured out writing this review together might be cathartic. So with least spoilers possible, this is our take on the Philippine premiere of Ed Lacson Jr.’s Stop Kiss.

Rogin: Jelou, do you mind starting off with the play’s plot?

Jelou: Okay. Stop Kiss follows the story of two women who find themselves in the hustle and bustle of New York City. Sara is an elementary teacher in the Bronx, while Callie rides helicopters to report traffic news in the city. They start off as strangers but later on become the best of partners after a few meetups and arguments. The development of their relationship however takes a tragic turn when a man, oozing with homophobia and bigotry, comes into the picture. 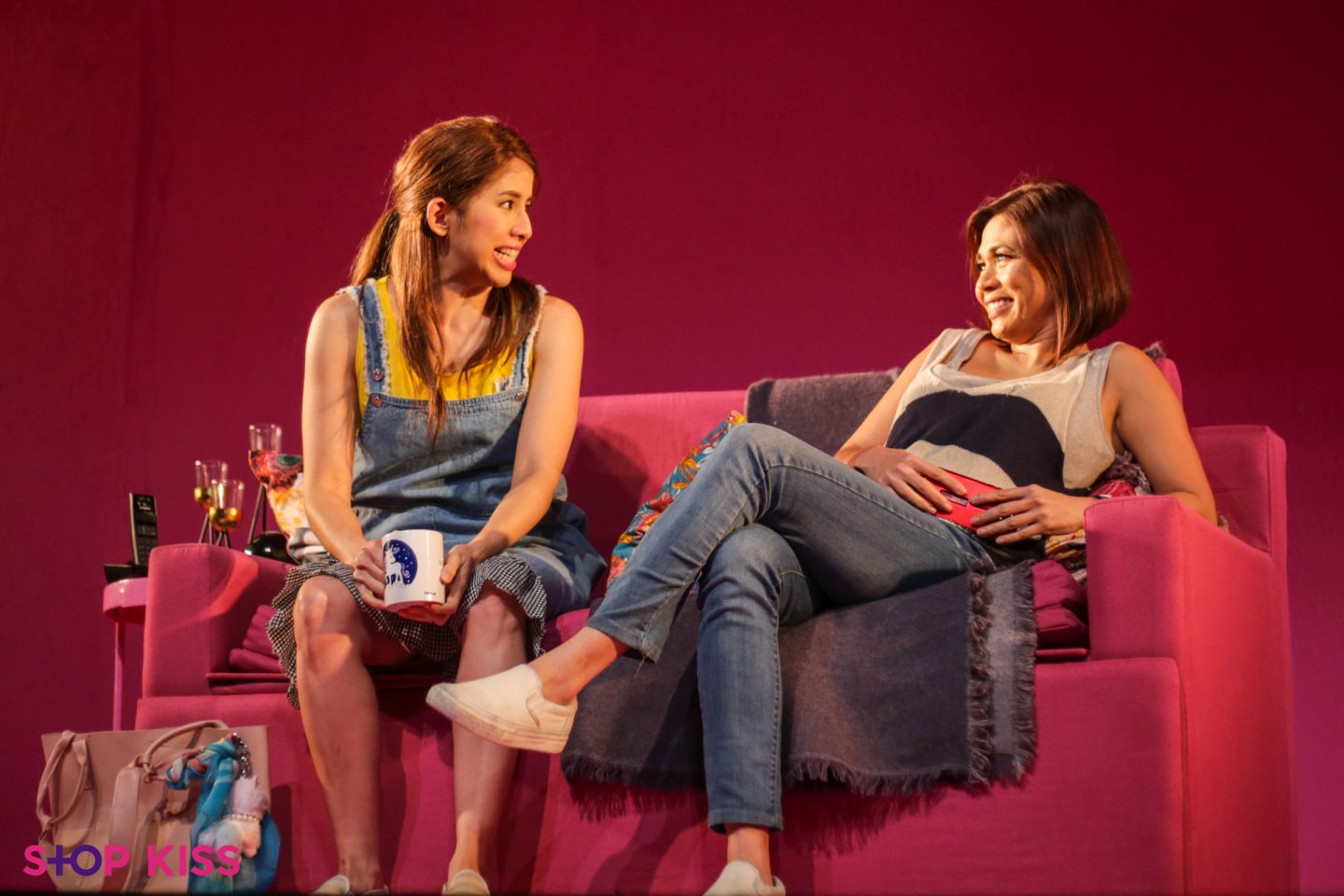 Rogin: What were we expecting before we went to the play?

Jelou: Honestly, my safest prediction was it’d tread along feel-good and mysterious, as the title left me intrigued. But I wasn’t expecting, at all, that I’d cry that much during the show. I just thought at least one scene would make me tear up and that’s it. Almost everything we watch makes us cry at one point anyway. But I liked how it surprised me.

Rogin: Well, I already know it’s going to hurt me. I somehow know the part that someone’s going to experience a homophobic crime. But I didn’t know there will be a meet-cute attached to it. Let’s be honest, the heart of the story is Sara and Callie. It’s their love story that could’ve been an average meet-cute. But you know, homophobia’s a dick.

Jelou: Yeah, the story actually was full of intense differences and sudden falls. Starting from the personalities of Sara who’s altruistic, enthusiastic and sometimes seemingly naive, and Callie, who’s more outgoing with an often IDGAF branding. What initially seemed to be static lives became more and more dynamic when they met, maybe because of how Stop Kiss cleverly showed us the development of strangers to friends and to something bigger than the two combined. It was a little unexpected, but you couldn’t say it was unrealistic. 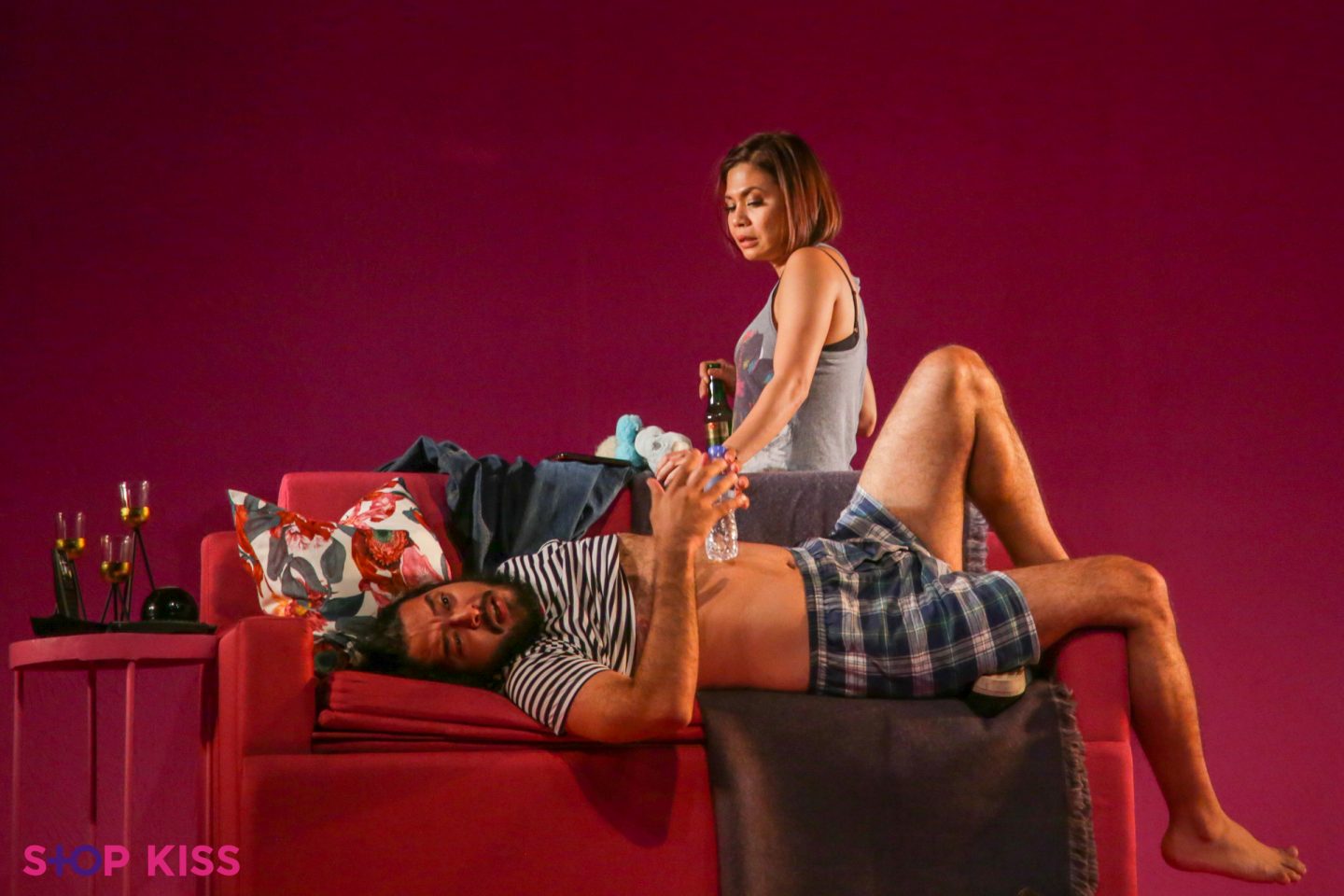 Rogin: I’m a firm believer in opposites attract. Sometimes, the trope can get toxic and weird. In their dynamic, it’s more of their two sides of the same coin. I think we both love how non-linear it was. But told through the play, this storytelling device wasn’t jarring or intimidating. It’s totally consumer-friendly.

Jelou: I totally agree. Even the alternating narration of past and present scenes helped in shaping our emotions; the stage setup makes scenes look like a film. It had wide frames that showed the joy in the story, and there were narrow frames that made me feel suffocated right in time with the characters’ struggle. This method made me want to empathize with Sara and Callie.

Rogin: I think it’s hard not to sympathize with the characters. Apart from them being two queer women, the way they met happens a lot in romance, or even comedies. It’s the turning point that people may or may not relate to. But the pain of almost losing something important is universal. 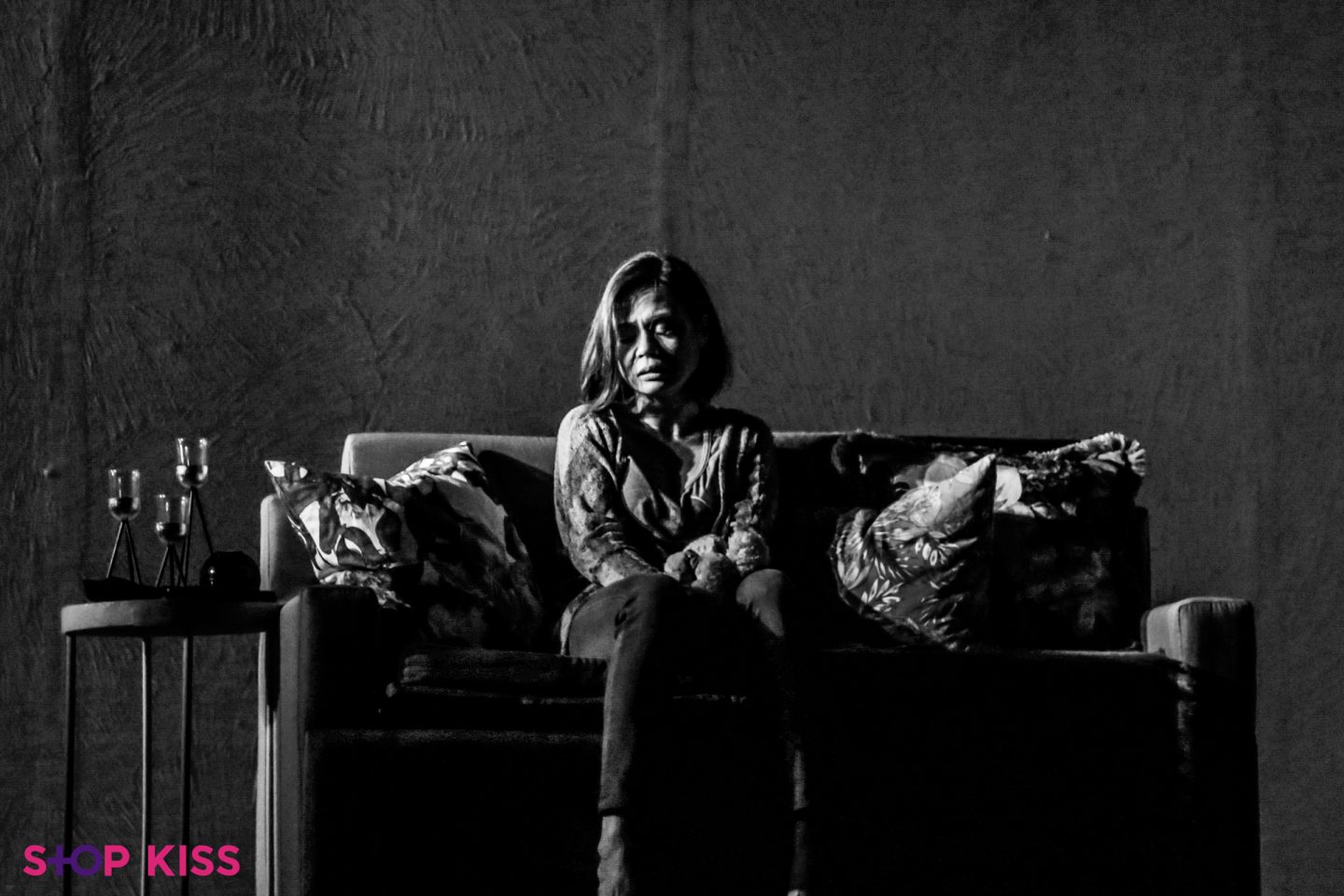 Jelou: Given that their ingenious narration (thanks to the gliding panels) was commendable, can we talk about the other parts of the set?

Rogin: Good god, let’s do it! I will start—those transitions with the gliding panels are smooth as fuck. It might be a common practice in theater, but I will be the basic bitch and say that I am in awe of it. Like we kept saying, it was like watching a film. It aided with the narrative in terms of we don’t want our disbelief to be interrupted. It helped hook the audience throughout. 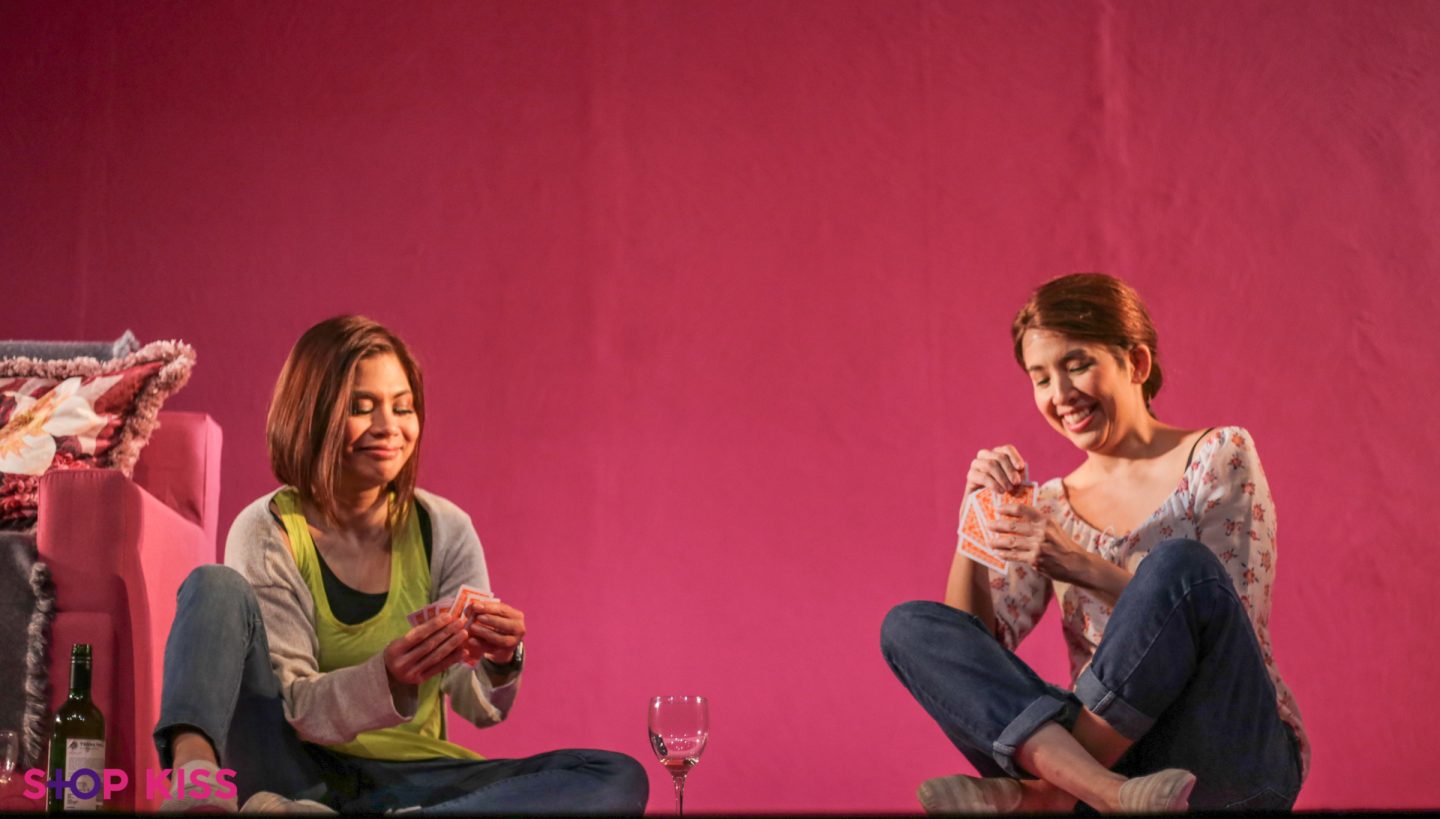 Jelou: It was so swabe that I didn’t want to miss out on anything. Props to the actors as well who had to transition their emotions as fast as the gliding panel could. Anyway, I also like how Stop Kiss didn’t need to bank on grandiosity and preferred minimal use of props. Every item on set had a purpose and served as an object for transition and progress. Damn, so smart.

Rogin: Let’s both be honest, the set design was simple. There’s not a lot of frills or thrills with it. For me, it makes it more down-to-earth, and more believable as a slice-of-life tale. It doesn’t want you to be swept away to Alicia Keys ft. Jay-Z’s “New York,” it wants you to feel like it’s your friend’s apartment, or this is the hospital downtown. It makes the story more relatable, more universal.

Jelou: Story and set up’s great, but do you think the dialogue missed out on anything?

Rogin: Right now, I can’t recall much. But I feel I just can’t hear some of the dialogue. Sometimes, the humor was lost on me. I didn’t find the straddle or swerve funny until the scene concluded. When I had the time to digest it, it became funny to me. It might be the delivery, or our distance from the seats, or maybe I just don’t have a sense of humor. It’s one of those. 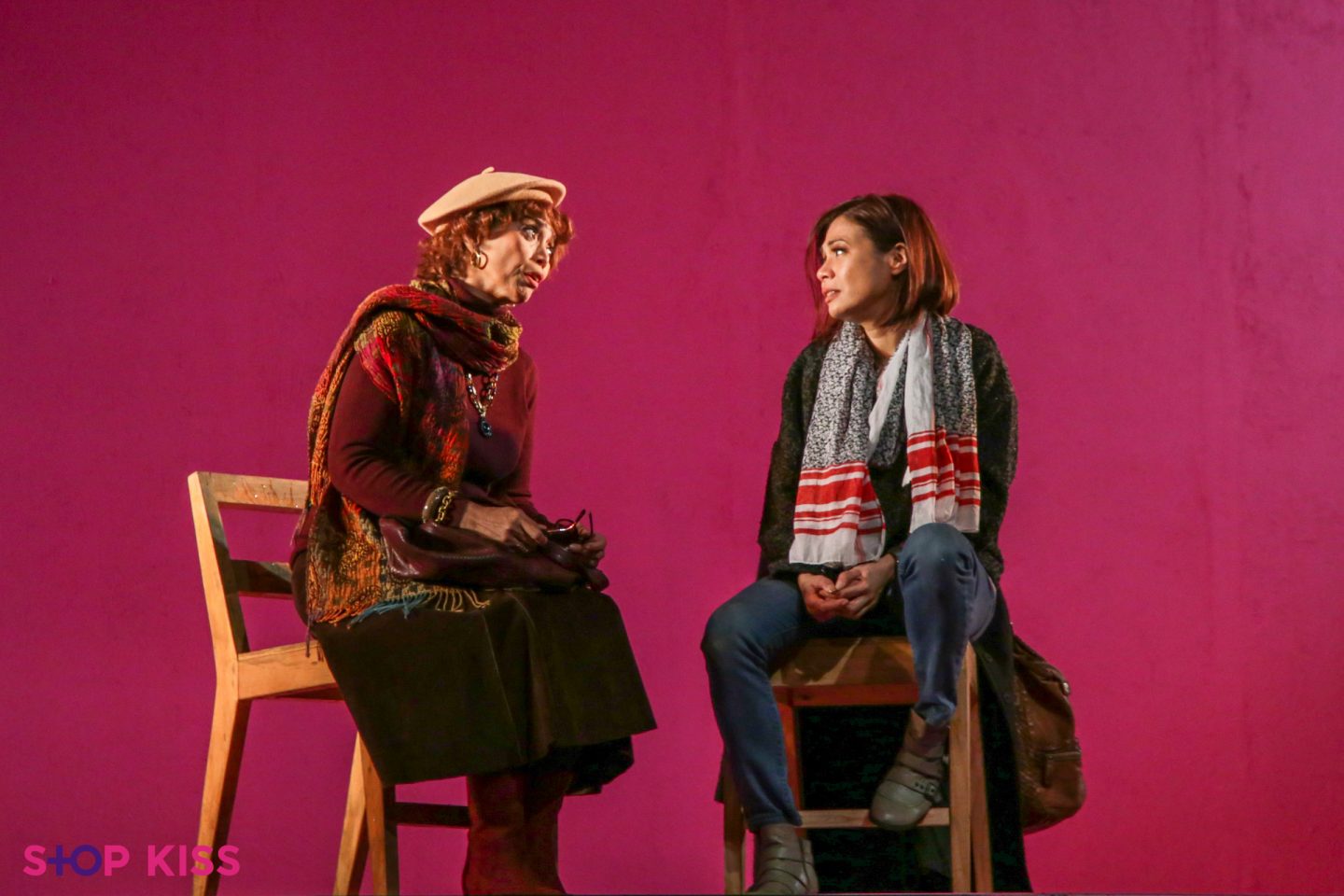 Jelou: Same sentiments! I wanted to think that maybe I was having trouble hearing some lines because we were seated in the middle. Sometimes, when I laughed a few seconds late, I’d think that maybe I couldn’t relate to a certain joke because I haven’t been to New York. Or maybe I just didn’t hear the catchphrase fully. Either way, I sincerely think it wasn’t a big hindrance to understanding the essence of the story. What mattered most is, I understood every scene and what it wanted to tell. It’s horrifying to realize that what we think are safest spaces for queers can still be intruded with danger of discrimination.

Rogin: As a queer person of color, I had a lot of moments where I felt unsafe, even in places people will call “safe.” It’s not that queer people require safe spaces. It shouldn’t be something we keep looking for; the world should be our safe space. It’s just that if every day feels like you’re unwanted by a majority of people, a safe space can be all you have. That’s just a tragedy we keep facing and we keep fighting for. I think like everyone else, I just wish we would get equal rights. It’s exactly what the community deserves.

SHAREWhat is it with Manila weather that you roll up your jeans and...

After the nine week campaign Dreams Come True coordinated by AirAsia and Spotify,...