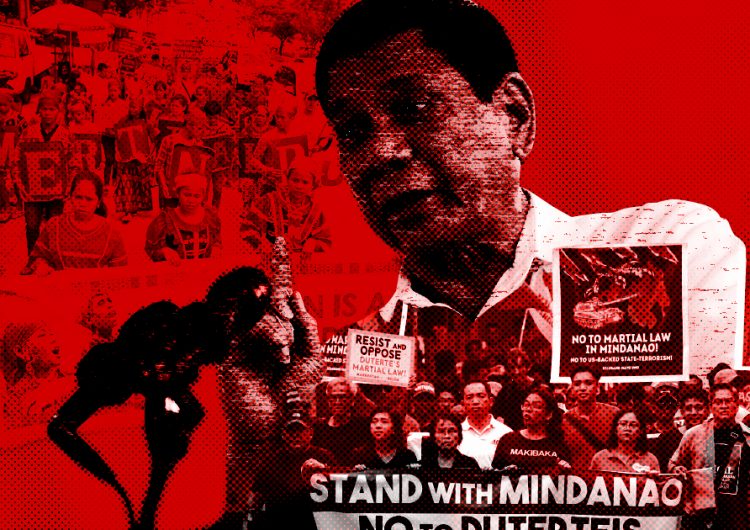 President Duterte’s annual State of the Nation Address (SONA) is happening on Monday. If the last three iterations are any indication, we’ll probably get an hour-ish speech sprinkled with off-script profanity and the occasional bigoted remark. We know, not a great look for the man who’s running our country.

We also know the script he’ll be reading will probably downplay (or even leave out entirely) a few choice issues happening around the country—to avoid making the government look bad, of course.

When will “true change” include the people who need it the most?

President Duterte mentioned that he’ll instead use SONA to “educate” people on why Chinese fishermen working Philippine waters is a-okay. Presidential communications secretary Martin Andanar has also mentioned that the discussion of the United Nations Human Rights council vote is “highly possible.” “Poverty alleviation, the Build, Build, Build program, and efforts to end communist armed conflict” will also be highlighted in the speech.

Judging by these tidbits, we feel like there are some issues sorely needing attention that won’t be covered in the SONA. We’re not forgetting, though. Before the official SONA, allow us to do a version of the state of the nation based on facts only.

Lumad children are being denied their right to education

This week, the permit to operate of 55 lumad schools were suspended. These schools are being red-tagged as New People’s Army (NPA) institutions. Was there due process done before ordering the schools’ closure? Not really. The order was carried out on the mere grounds of national security adviser Hermogenes Esperon Jr.’s accusations, which were apparently “serious enough to warrant immediate action.”

The schools are being run by Salugpongan Ta’ Tanu Igkanogon Community Learning Center Inc., a non-profit educational institution that offers alternative learning for lumad children. Alternative not meaning additional subjects on guns and armies, but sustainable agriculture and health—specialized subjects that are hinged on the lumads’ cultural needs.

Locals are being forced out of their lands

Communities continue to be displaced from their homes in the face of commercial, privatized infrastructure. Yet again, the urban poor are neglected and excluded in the name of “development.” In Barangay Taliptip, Bulacan, around 700 fisherfolk will be displaced in favor of a seven-billion-peso airport. In Sitio San Roque, QC, thousands are being forced out of their homes while a giant road is being constructed right through their neighborhood. In Bayview, Parañaque, police broke into the homes of 60 families and dumped their belongings on the street as their homes were threatened with demolition.

Not only are the locals being displaced, but the environment is also affected. 600 mangrove trees were cleared out and 25 hectares of fishing reservation areas will be damaged for the Taliptip construction. In Sitio San Roque, large commercial developments are dumping waste into the creeks beside the community, which puts the people at risk.

“Shit happens,” as said by Senator Bato Dela Rosa. Shit meaning the death of a three-year-old girl in a police crossfire. The Senator apologized for the statement, but also said that the words shouldn’t have been used in public since it might be “given a bad meaning.” Instead, the phrase “should only be for the police community,” says the Senator. What does this tell us? That behind closed doors, the PNP reduce a toddler’s life to shit? Evidently, the police don’t think much of children’s lives.

Senate President Vicente Sotto III also refiled the bill lowering the age of criminal liability, even after UNICEF called this a violation of children’s rights. The bill proposes that 12-year-olds can be held criminally responsible. Can you imagine being behind bars at 12 years old instead of playing on the street?

Workers are risking their lives for less than minimum wage work

#BoycottPEPMACO. #StandwithZaguWorkers. #FreeNutriasia17. Do these hashtags look familiar? They’re movements initiated by employees who were treated like machines in their workplaces. They are paid less than 400 pesos a day, prevented from wearing protective gear which endangers their lives, and long-time workers—some reaching up to 10 years—are still contractual workers. When they try to speak up for themselves, they’re met with violence.

Duterte claimed in his 2018 SONA that he wants to put an end to contractualization through an Anti-Endo Law. On Labor Day last year, he also signed Executive Order 51, which bans illegal labor contracting. Worker groups say that the EO barely did anything though, and judging from what’s happening to the workers behind these hashtags, they have a point.

Two years later and Martial Law still continues in Mindanao. It was initially put into place to address the siege of Marawi City in 2017—an issue that has now been closed. Currently, there’s no factual evidence to show that there is still rebellion in the area, according to some in Congress (which, according to the Constitution itself, is needed to declare ML).

According to the President, it’s still “a dangerous place.” What has been happening the past couple of years? Where is the effectivity? ML should be a “last resort option” for preservation and shouldn’t even exceed 60 days, but here we are, with the current declaration expected to be extended until the end of 2019.

Does “all Filipinos” really include everyone? Or does it only include people who have money and privilege?

“As a worker of the government, I promised to do whatever it would take to give all Filipinos a comfortable life, fighting powerful interests and making sacrifices,” President Duterte said in last year’s SONA. Does “all Filipinos” really include everyone? Or does it only include people who have money and privilege?

As we can see, the past year barely saw any improvement for the lives of the impoverished. When will “true change” include the people who need it the most?