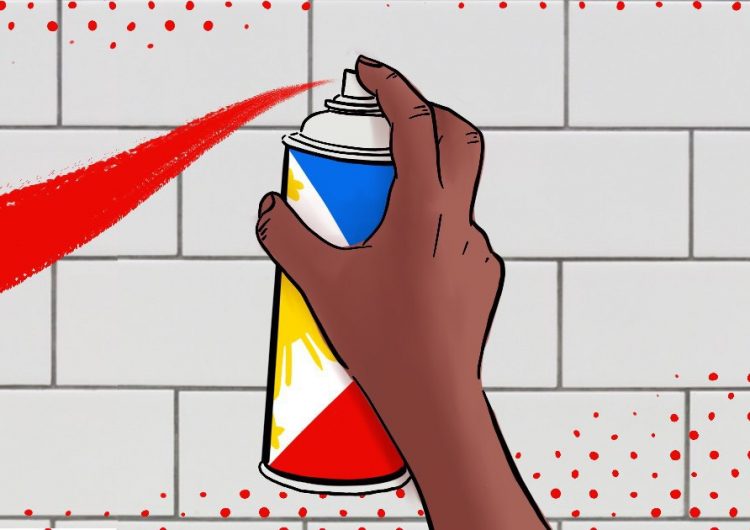 When youth group Panday Sining admitted to writing the street graffiti in different spots in Manila—including the newly-painted Lagusnilad underpass—the country underwent a momentary divide. In red spray paint, these writings brought to light different national issues: from the lowering of prices of basic goods to defending the country from China’s gradual domination of the Philippines.

“Sorry for the inconvenience, but the matter and issues at hand are urgent,” the cultural collective’s statement said, following the citation of various issues: the killings and persecutions of the administration’s critics, nationwide de facto Martial Law, and the worsening joblessness and poverty in the country, among others.

Though the act was applauded by some, it seemed to have drawn more attention from the people who went against it—including Manila Mayor Isko Moreno himself. “Kapag nahuli ko kayo, ipapadila ko sa inyo ‘to,” he addressed to the cultural group, pertaining to the painted walls. The local government of Manila further emphasized that Ordinance No. 7971, which prohibits vandalism, exists.

There’s obviously a conflict here, on the one hand, democratic spaces are technically not being respected; on the other hand, others have thought the act to be deserving of a more, say, radical reading: Is wall graffiti one of the last bastions of free speech?

To hear what the youth has to say, we asked Scout readers on Instagram and Twitter: Do you agree with the removal of protest graffiti in Manila? We’re having a discussion. Sound off your stand.

Just this week, Manila mayor Isko Moreno told vandals they can “lick their graffiti off city walls.” The local government firmly states that vandalism is not the answer for change. But under the premise that democratic spaces are not being respected or heard, is wall graffiti one of the last bastions of free speech? Where do you stand? Sound off in the comments below. #SCOUTRoundTable

Some people see no wrong in street protests but have reservations. This is exactly what Instagram user @_paulgabriel said: “Yes, with reservation. Dapat gandahan, huwag pang-pintuan ng cubicle. (laughs)” Others tried to suggest a “peaceful” kind of protest like @kkinglou (“It can be peaceful naman, hindi lang naman pag-va-vandalize ang pwedeng gawin. May mga maaayos na paraan,”) and @cianadimaculangan (“Protests can be peaceful. Pride March is actually a protest but it does not hate, vandalize, nor destroy.”)

Others believe that a protest is naturally non-peaceful, that its goal is to disturb. “Protest by nature is not supposed to be agreeable to all. Of course it’s going to provoke. Wala naman ‘yan sa bagong pintura. If you can paint a confronting image on something, of course you’re going to piss your targets off. I’m for it, I don’t mind if this is what it takes to light a fire under people’s asses.” Moreover, @josh.valentin offers a bottomline: “There is no proper way to do protest. If you are provoked by protest, then it is doing its job.”

The reason why @stevonniemartin agrees with the removal is because of its being an illegal act: “it’s just sort of disheartening how the cleaners would take their time cleaning out these graffiti.”

“Vandals are meant to be removed and the people who did that knows it clearly,” tells @popstarpikoy. But the question is: What do we do now? “They did a great job at putting out a message and it is up to us now. Ano gagawin natin sa mensahe? Buburahin din ba natin ang historya?”

Going back to reservations, some of our readers agree with the removal of protest graffiti considering the fact that there are other ways to protest. @coulicatch shares: “I support its removal. While I sympathize with the needs and concerns of the group responsible, there are other ways to make their voices heard without damaging public property. Placards, floats, performance art… there are so many options that are not illegal.”

However, there are some who believe that protest graffiti really might be one of free speech’s remaining defenders. “If graffiti is the only way to give marginalized individuals a chance to speak for their opinions about our country, then I don’t mind seeing those whines tattooed on the walls of public offices. We need something that would cause a great impact to somehow, excuse me, at least hoping that somehow it would wake up our sleeping no beauty officials! They are kinda dope btw, might want to have photos with them too! Imagine how strong your photos could be with the concerns of people on your background!” @bendoyjim says.

Meanwhile, @momomond agrees with the removal of the graffiti considering that Mayor Isko is just “trying to make the city as clean-looking as possible,” written protest might have been the go-to because the “government right now have their ears closed. So maybe the next option for them to hear people out.” He added that maybe these painted slogans keep government officials annoyed, since they can reflect “what they may be lacking.”

Following the previous argument, @carlosiots claims that the government doesn’t really give a shit about vandalism—as long as it’s not about them, they remain unnoticed. “Lahat naman may pinanggagalingan. These vandals wouldn’t be there if the government is being well-responsive to the people.”

A good number of Scout readers wants us to go a little deeper. Why were these calls made and why did people resort to vandalism to do so? @kirszar says, “know the purpose of this protest, and know why they had to do THAT instead of what all of you are suggesting. Its goal is to provoke, and sa tingin ko nagawa niya na ang goal niya. Mas gusto lang siguro ng karamihan tumira sa bayan na maganda lang tignan, hindi sa maayos tirahan.”  @gabbudgett adds to this justification, explaining how the Philippines is battling different problems right now but people spend so much more time drawing the line at graffiti. Our attention to “people being killed, poverty” and more is being swayed away.

“If only people in power pay as much attention to the eradication of poverty, building better school systems, free health care for all, and the creation of good and sustainable jobs that provide living wages, maybe everyone would be too busy living productive, happy, and fulfilling lives to vandalize. Just saying,” @hannidont expressed.

While the discussion on protest graffiti deserves so much more than just a single-page article, what could help us arrive at a nuanced (and somehow fair) conclusion is to try to understand the intent behind the action. What, really, is the root of all this? Could we really dismiss this as senseless clamor for attention, or is it truly a legitimate act of desperation? If we can talk so much about what erasable paint can do, maybe we can talk about the pressing issues that directly affect our lives, too. Checking our privilege could be a step. Just imagine what a person—someone who did the protest graffiti, to be exact—might have experienced for them to resort to airing their struggles on public property. We might have other ways to express our feelings and struggles the way we see fit, but is everyone afforded those options?

One thing’s for sure: If art is meant to disturb the comfortable, in this case, it has done its job.