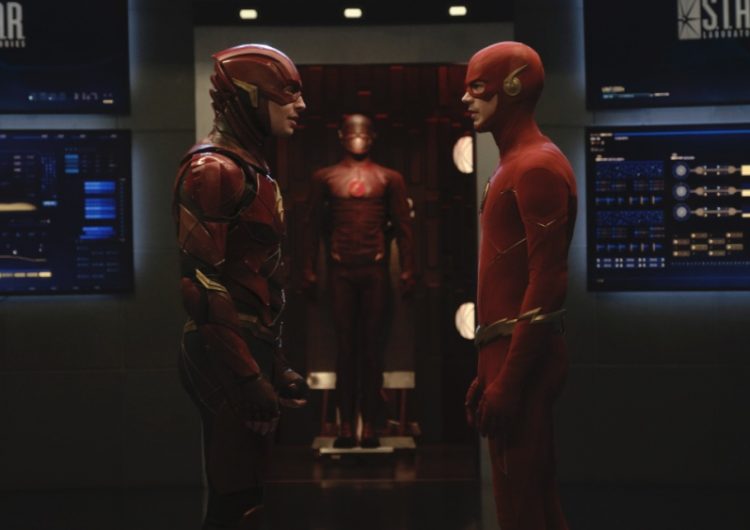 In an unexpected cameo on the CW’s “Arrow,” Ezra Miller, the Barry Allen of the DC Extended Universe (DCEU) meets Grant Gustin’s TV Barry Allen on the five-episode crossover event, “Crisis on Infinite Earths.” This isn’t the only crossover going down. Expect your DC faves from past DC properties in this Arrowverse crossover, such as Tom Welling’s Clark Kent from “Smallville,” Burt Ward’s Dick Grayson from the 1966 “Batman” television series, and Kevin Conroy’s Batman from “Batman: The Animated Series,” to name a few.

In a meeting that could have only been possible in fan art, the cameo was probably the biggest surprise that came out of the crossover. No one, not even insider reporters and “scoopers” knew about it. Warner Bros. boss Peter Roth suggested putting Ezra for a cameo role in the crossover.

Back in 2015, Ezra teased in an interview about wanting his Flash to challenge Grant’s Flash in a race. Five years later, Gustin’s Flash runs into Miller’s Flash in S.T.A.R. Labs and complement each other’s suits. Before fading away into the Speed Force, Miller’s Flash name drops Victor Stone a.k.a Cyborg, “I told Victor this was possible.” This could mean that the scene takes place after the events of “Justice League” where Barry Allen talked about the possibility of infinite Earths and time travel.

Read more: Ezra Miller is reportedly writing the script for “The Flash”

This basically confirms Miller will return as the Scarlet Speedster for “The Flash” movie which is slated for release on Jul. 1, 2022. The film is directed by “It” director Andy Muschietti and will have elements from the “Flashpoint” comic book storyline which sees Barry altering the timeline. In its third season, the ”Flash” television series has also adapted the storyline.

Fans wanted the television and movie universes to crossover at some point, but no one thought it would be this soon. With the DC Multiverse’s death and rebirth, the crossover event organized the many different universes and issues on having many iterations of a character. The Multiverse is a big place for one Barry Allen. We’re not usually a fan of fan service, but this one might actually have a shot.

Still from “Crisis on Infinite Earths”