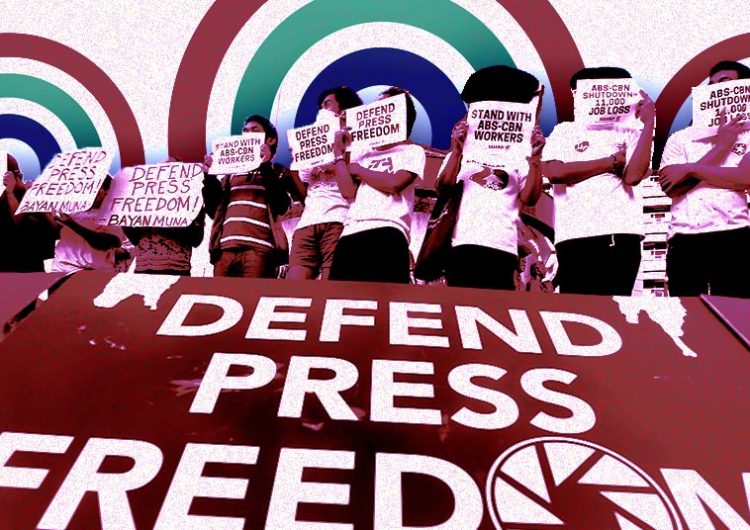 Another week, another issue. Well, life in the Philippines really is just a succession of ongoing issues overlapping, piling up on top of each other, never truly getting resolved, hoping you’d just forget about them when a new controversy comes up. Taal Volcano eruption? Angkas getting targeted? The drug war? The government’s incompetent mishandling of the novel coronavirus outbreak? China slowly taking over our country from under our noses? All pushed to the side this week by the Duterte administration’s latest skirmish against one of the country’s major networks, ABS-CBN.

For those who are barely keeping up, a recap:

1. The network’s franchise is in the hands of both houses of Congress, which can extend it by passing a bill.

2. The president has been threatening to block ABS-CBN’s franchise renewal (up on March 30 this year) as far back as 2017, during his first year in power, due to the network allegedly not airing campaign ads he paid for during the 2016 election season and for running an anti-Duterte ad paid for by former senator Sonny Trillanes.

3. The House of Representatives is taking its sweet, sweet time in tackling said extension bill, obviously delaying it long enough until the franchise expires. As president, Duterte would have to approve the bill too—and since he holds all the cards, it’s not looking good for the network.

4. As if the outlook wasn’t bleak enough, here comes Solicitor General Jose Calida, filing a motion for quo warranto against ABS-CBN with the Supreme Court, because the network is apparently broadcasting a pay-per-view channel without a permit from the National Telecommunications Commission, and it also allegedly has foreign ownership. (As you might have learned from their attempt at taking down Rappler, Philippine media corporations can’t be foreign-owned.)

This whole harassment of the network is clearly the government trying to stifle press freedom.

All you need to know are two things. First, that ABS-CBN isn’t really foreign-owned because they sold Philippine Depositary Receipts to foreigners, which doesn’t give them real ownership of a company. It’s extremely tricky and maybe a little counterintuitive (which explains the lawsuit) but it’s what the law says. What the Supreme Court decides to do with that, if they’d do anything about it, could be huge.

Read more: While ABS-CBN gets shut down, hold the government accountable for these issues too

Second, and most importantly, this whole harassment of the network is clearly the government trying to stifle press freedom.

It’s not some conspiracy theory the opposition’s trying to conjure out of nothing. You know Duterte is prone to verbal diarrhea, and his pettiness makes him the least subtle and sophisticated evil villain ever. He’s gone on to say he’s got beef with the network because they dared criticize him. He even outright says they could settle the whole thing if they just promote what he wants.

If that happens, that’s a major network—one with such an entrenched place in a lot of Filipinos’ lives—under his control, free to influence the country the way the government wants.

That’s the real endgame here: a press he can control. Again, they’re not subtle about it; the government is pressuring ABS-CBN so that its stock price goes down, leaving it open for someone like, say, another oligarch to take it from another oligarch. Duterte even straight up told the Lopez family, owners of ABS-CBN, to sell the company. If that happens, that’s a major network—one with such an entrenched place in a lot of Filipinos’ lives—under his control, free to influence the country the way the government wants. You might not realize it now, but you don’t want that. No one wants that.

Thousands of people will lose their jobs, all because of a president’s extreme pettiness and transparent ulterior motives. It won’t be the first life he’ll ruin, and we all know it certainly won’t be the last.

There’s one more thing you have to keep in mind about all this, and that’s the people caught in the crossfire. Losing the broadcasts won’t just mean the loss of a TV channel or an AM and FM radio station on the dial. You know there will be cuts made, because what are all these people going to do if there’s no TV and radio? Thousands of people will lose their jobs, all because of a president’s extreme pettiness and transparent ulterior motives. It won’t be the first life he’ll ruin, and we all know it certainly won’t be the last.

At this rate, though, it’s about to get a lot worse before it gets better. It’s going to take a legitimate miracle from whatever divine entity is watching over us to stop the machinations of this government. We might as well focus on what we could do about it all. Will this finally be the spark that ignites the much-needed revolution, or are we just going to sit on our asses through all of this again, waiting for something worse to happen? Only we can answer that.